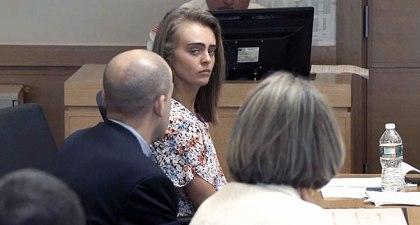 TAUNTON, Mass. -- A young woman accused of sending her boyfriend dozens of text messages urging him to kill himself when they were teenagers "kicked out his feet from under him" every time he expressed doubts about taking his own life, a prosecutor said Tuesday.

Michelle Carter is charged with manslaughter in the death of Conrad Roy III in 2014, when she was 17 and he was 18.

During closing arguments, Assistant District Attorney Katie Rayburn said Carter, who's now 20, told Roy his relatives would be fine after his suicide and she would take care of them. Rayburn said Carter scolded Roy whenever he became frightened and abandoned any plan to kill himself.

"It got to the point he was apologizing to her ... apologizing for not being dead yet," Rayburn said.

Prosecutors allege Carter pushed Roy to commit suicide because she was desperate for attention from classmates, reports CBS Boston, and wanted to play the role of a grieving girlfriend.

Rayburn also pointed to Carter's texts to her friend Samantha Boardman in which she said she felt responsible for Roy's death-- and admitted she was afraid the texts would be discovered.

"If they read my messages I'm done," the texts read. "His family will hate me and I'll go to jail."

Carter showed no emotion as the prosecutor delivered the closing statement, according to the station.

Carter's lawyer, Joseph Cataldo, said Roy was intent on killing himself and took Carter along on his "sad journey." Cataldo said Carter was struggling with "baggage" of her own at the time.

A psychiatrist who testified for the defense said Carter was suffering from side effects from an anti-depressant she was prescribed.

Cataldo said Carter became "overwhelmed" by Roy's suicidal thinking after she initially tried to talk him out of it and urged him to get professional help.

"It was his constant wearing on Michelle Carter for over a year and a half of 'I want to take my own life,'" Cataldo said.

Cataldo said Roy chose to take his own life, reports CBS Boston, and Carter can't be held responsible for it.

He pointed to a text to Carter in which Roy wrote, "There is nothing anyone can do to make me want to live."

Roy was sitting in his pickup truck in the parking lot of a store in Fairhaven in July 2014 as the truck filled with carbon monoxide. After he exited the truck, Carter told him to "get back in," prosecutors said.

In a suicide note that was introduced into evidence Tuesday, Roy thanked Carter.

"I love you and greatly appreciate ur effort and kindness towards me," Roy wrote in a handwritten note in a spiral notebook. "I'll forever be in your heart and we will meet up someday in Heaven."

Earlier in the day during defense testimony, psychiatrist Dr. Peter Breggin described how Carter believed she was helping Roy, and how the antidepressants she was taking may have influenced her actions.

"She thought she was this grand, helping person who was going to help her boyfriend get what he wanted," he said.

Carter waived her right to a jury trial, so Juvenile Court Judge Lawrence Moniz will decide the case.

The defense rested their case after Breggin concluded his testimony Tuesday. The judge began deliberating late Tuesday. He said he will announce his ruling in open court, but he did not give any timeline.