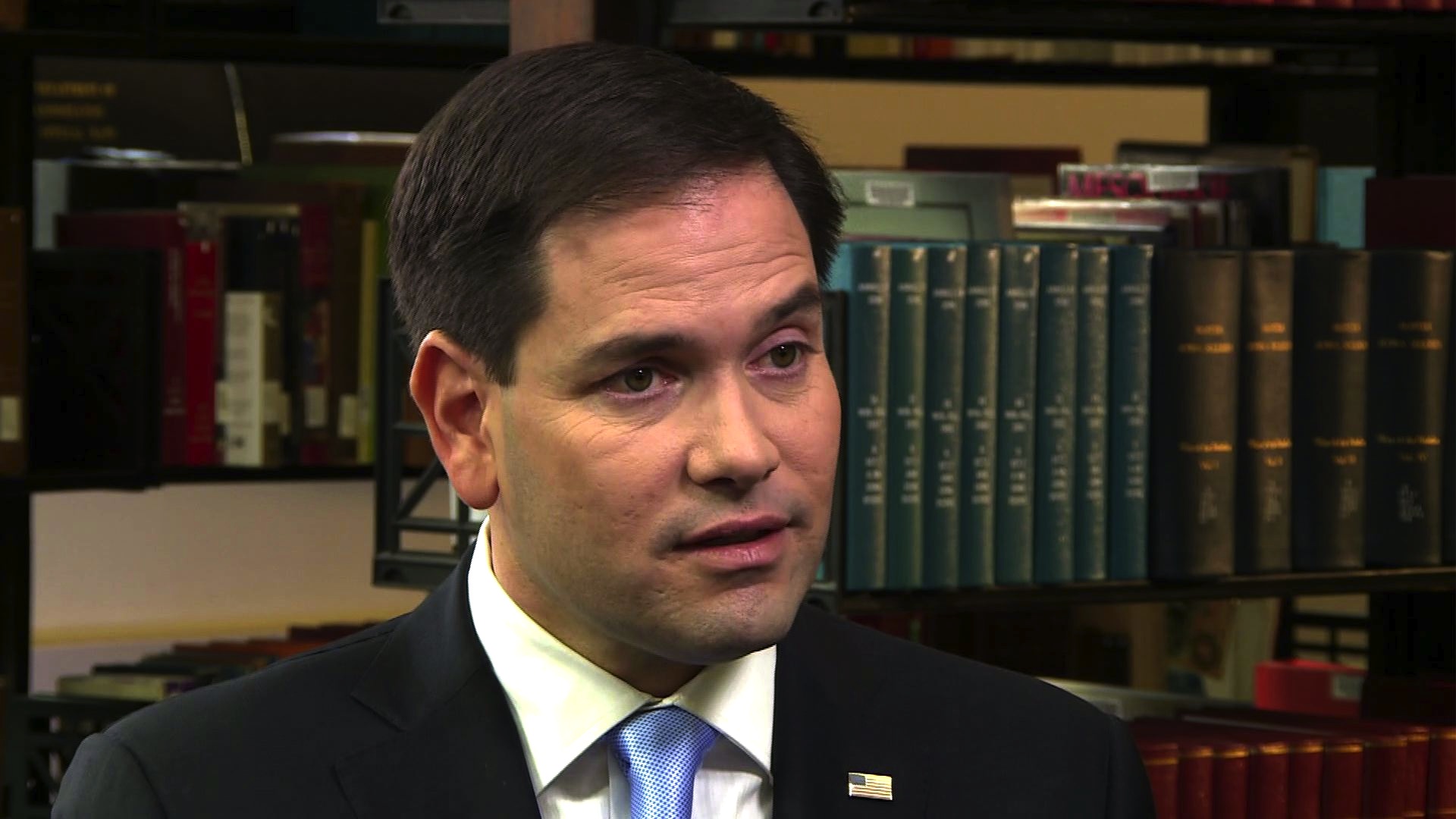 "He's jailed and murdered journalists, political opponents. He bombed an apartment building as a pretext to attack the Chechens. He is responsible for the downing of the Malaysian airliner over Ukraine, because he provided the antiaircraft weaponry that was used for that," Rubio said in an interview that aired Sunday on CBS' "Face the Nation."

Last week, the Russian president said Trump was "an outstanding and talented personality" and a "bright and talented person." He praised Trump's pledge that he could work with Russia - and Trump said that the compliments from Putin are "a good thing...not a bad thing."

Rubio said, "From a geopolitical, realistic level, we have to deal with him but because he's the leader of an important country that, between them and us, control over 90 percent of the world's nuclear weapons. But he is not someone who is going to go down in history as a great leader."

In an interview with MSNBC on Friday, when Trump pressed about accusations that Putin uses brutal tactics - including killing journalists and political opponents, Trump said, "I think our country does plenty of killing also."

Rubio hadn't yet heard Trump's response, but said if he did say that, "it's outrageous."

"I don't know of a single documented instance in which the President of the United States has ever ordered an assassination of journalists who issued bad coverage of them or who have taken a different political line," he said.

Rubio also criticized Trump's proposal to temporarily ban Muslims from entering the United States as "not a serious policy proposal" that was "made for the purpose of recapturing the headlines."

Ultimately, he predicted, "all of this will pass."

Moderator John Dickerson asked about comments from Senate Intelligence Committee Chairman Richard Burr, R-North Carolina, who said on "Face the Nation" last week that Trump's comments could potentially be used as a recruitment tool by Islamic State of Iraq and Syria (ISIS).

"The primary recruitment tool that ISIS uses is that they are recruiting people to join their apocalyptic cause," Rubio said. But, he added, "We will need cooperation and work alongside American Muslims, Muslim-Americans in this country to identify areas where people are being radicalized or things they may see in their community...There are very patriotic Muslim-Americans who love this country and would love to share information with us to prevent these attacks. And so to the extent that rhetoric could prevent people from doing that or make them resistant to cooperating with law enforcement and intelligence agencies, that's problematic, of course."

Although Rubio has plenty of criticism for Trump, the real rival he has been targeting for the 2016 Republican nomination is fellow Sen. Ted Cruz of Texas. The two have been sparring over their immigration records since last Tuesday's Republican debate, with Cruz accusing Rubio of supporting amnesty and Rubio charging that Cruz has been dishonest about his past support for legalizing people who came to the U.S. illegally.

In a portion of the interview released last week, Rubio said Cruz is not such a "purist" on immigration.

"The truth is everyone running on the Republican side supports strong, conservative positions," he explained. "We have some differences on some issues. And we should discuss those, like national security, for example. But when you run by telling everybody you're the only purist in the field, you're the only one that's always consistent conservative, well, I think then your record is going to have a light shown on it."

Rubio said the inconsistencies don't stop at immigration. He said Cruz has flipped his position on free-trade agreement and farm issues as well.

"My concern is that, if you're going to attack someone on a policy issue, you need to be clear about where you stand on the issue and where you've stood in the past," he said.

The two senators also have disagreements on foreign policy, and Rubio said in the interview that Cruz was "wrong" to say that the U.S. should focus on killing enemies rather than getting stuck in wars in the Middle East.

"Civil wars in the Middle East have a direct impact on America," Rubio said, pointing to the civil war that erupted in Syria when people tried to overthrow dictator Bashar al-Assad.

"The argument that Assad, and we have no vested interest, and he's not an enemy of America is wrong. For example, Assad is the reason why there's a refugee crisis. Why are there hundreds of thousands of refugees destabilizing Europe, tens of thousands trying to come to America? Because Assad is conducting an attack of sectarian cleansing. He is conducting a program of getting rid of all the Sunnis. And that is forcing hundreds of thousands of people to destabilize Europe and Jordan and trying to come into the United States," Rubio said.

He argued that the U.S. is not going to take Assad out, but that the Syrian people will do so. He said the U.S. should have intervened far earlier, because the longer there is a vacuum in leadership, "the harder it's going to be to govern that country afterwards."

"Our involvement wouldn't have exacerbated the uncertainty. Without America firing a single bullet or providing a single weapon, there was going to be a civil war in Syria that was going to destabilize Syria and create a vacuum. And so our choice was let it play out," he said. "If you let it play out, it leads to the vacuum, which leads to these ISIS fighters. Or do you do something to end it as quickly as possible, so that vacuum isn't created. And that's the choice we had three years ago. We didn't take it under this president."

With his poll numbers on the rise, Rubio has stepped up his presence on the campaign trail ahead of the Iowa caucuses. In a new ad, he references, "all of us who feel out of place in our own country."

Rubio told Dickerson that people feel out of place for several reasons: Economically, people are not making the same gains after going to school and getting an education, he said, and only people who have access to power and influence win.

Plus, he said, "People that hold traditional values are often described as bigots and haters." He used the issue of same-sex marriage as an example.

"In the broader left, I've been called a bigot for not supporting the definition of marriage," he said. "I was called anti-Hispanic, anti-Latino by a group of, I don't know, obviously, people from the left, funded from the left, who argued that, unless we agree with them on everything, somehow, we've betrayed our community. I mean this is standard operating practice from the left."