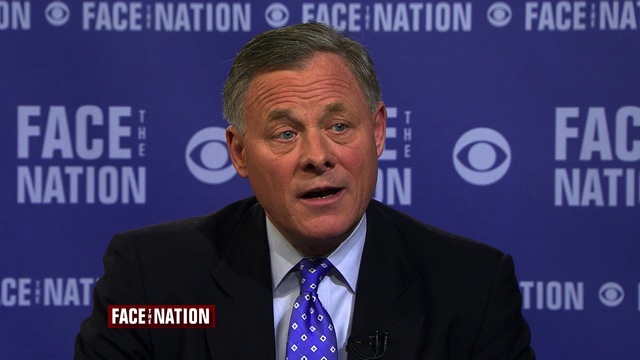 A top Democrat and Republican both said Sunday that Republican presidential candidate Donald Trump's proposal to temporarily ban Muslims from entering the U.S. is bad for national security.

"I'm concerned about radicalization here from people who are already in the United States and that does tend to fuel it," Senate Intelligence Committee Chairman Richard Burr, R-North Carolina, said on CBS' "Face the Nation" Sunday.

Burr pointed in particular to the United Arab Emirates, one of just three countries that has participated in each of the last five coalition battles around the world.

"How do you tell the Bahraini pilots that fly, the Saudi pilots that fly and the Emirati pilots, 'You're good enough to fight against ISIL, but you're not good enough to come to the United States'? Huge mistake," he said, using an alternate acronym for the Islamic State of Iraq and Syria (ISIS). "I think that this sends the wrong message to people that have to be part of our partnership for a solution. And yes, it does serve as fuel."

In a separate interview on "Face the Nation," Secretary of State John Kerry called Trump's proposal "contrary to American values" and "a very dangerous foreign policy."

"It allows for America to seem like it is indeed discriminatory against Islam, against Muslims. And it is highly discriminating against many Americans and others who are Muslim. And many people in the world who know that their religion has been hijacked and who want to recoup it," Kerry said. "I think it's got a huge downside in terms of American foreign policy and I hear this from foreign ministers and others as I travel and engage with people in various countries."

Burr also talked about the hunt for more information in the wake of the San Bernardino shooting that left 14 people dead. FBI Director James Comey revealed last week that the suspects were radicalized at least two years ago, a fact that was missed during Tashfeen Malik's screening for a fiancé visa.

As a result, Burr is arguing that the government needs more access to encrypted communication in case that's how the husband and wife team were planning their attack - although there is still no evidence that was the case.

"Encryption is becoming more and more a problem with our ability to see inside of the communications, of individuals both in the United States with each other and with people abroad," Burr said.

When moderator John Dickerson pressed him over the fact that the tech community argues that special access for the government makes everyone more vulnerable to hackers, Burr likened the search for terror suspects to the search for people accused of sharing child pornography.

"If we changed and we weren't talking about terrorism and we were talking about pedophilia and the FBI is trying to make a law enforcement case against somebody sending photographs of a kid to another pedophile, would we want with a legitimate court order be able to make that case based upon what they were transferring in encrypted networks? The answer is yes," Burr said.

"By the same token, we want to make sure that if we have a legitimate court order that law enforcement can go and ask to look at the communications that took place, I believe that's reasonable and I believe that it's absolutely needed in the future," he added.