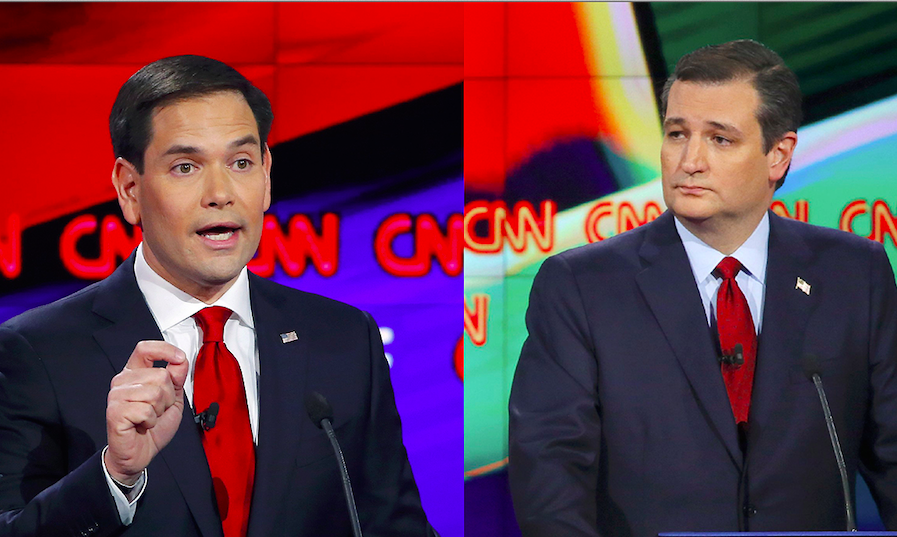 The immigration debate between Sens. Marco Rubio of Florida and Ted Cruz of Texas has touched off a full-blown war of words on the campaign trail.

"Immigration is an issue which is near and dear to the heart of most of the Republican electorate and what Cruz and Rubio realize is they've got to knock each other off for the potential to face Trump," said GOP strategist Ford O'Connell, who is not affiliated with any of the 2016 candidates.

The battle lines have been drawn.

"What Cruz wants to do is to slime Rubio as an establishment RINO before Rubio can gain any momentum in New Hampshire." ("RINO" stands for "Republican in name only, a contemptuous term the most conservative Republicans use to describe their more moderate counterparts.)

Cruz's weapon of choice is what conservatives refer to as "amnesty," a path to citizenship.

During the debate, Cruz attacked Rubio for his role in crafting the 2013 Senate immigration bill that included a path to citizenship for some who came to the U.S. illegally. This is anathema to most conservative Republicans, and it is a position that Cruz and several of his fellow GOP candidates are likely to use against Rubio for the duration of the race.

Cruz rejected a pathway to legal status. "I have never supported legalization, and I do not intend to support legalization," he has said in the past.

In 2013, however, Cruz proposed an amendment to the bill that would have denied immigrants in the U.S. illegally the chance to become citizens - but not the opportunity to seek legal status. He said he was doing it to save the bill.

"If the proponents of this bill actually demonstrate a commitment not to politics, not to campaigning all the time, but to actually fixing this problem, to finding a middle ground, that would fix the problem and also allow for those 11 million people who are here illegally a legal status with citizenship off the table," he said on the Senate floor in June 2013. "I believe that is the compromise that can pass." He told a reporter from the Washington Examiner that his goal was not to kill immigration reform.

And in April of 2013, Cruz discussed the issue with CBS News' Jan Crawford.

When asked what he would do for the 11 million undocumented immigrants in the U.S., Cruz told Crawford, "I think there could probably be a compromise on that."

He added: "If a path to citizenship was taken off the table."

Now, Cruz claims that he didn't want the bill to pass. "The fact that I introduced an amendment to remove part of the Gang of 8 bill doesn't mean I support the rest of the Gang of 8 bill," he told Fox News' Bret Baier Wednesday when confronted with his past words. "What that amendment did is it revealed the hypocrisy of Chuck Schumer and the Senate Democrats and the establishment Republicans who were supporting it."

That's not Rubio's interpretation. His line of attack -- and what he said to voters in Muscatine, Iowa Thursday is this: Ted Cruz has been deceiving you.

"I think Ted wanted to leave the option of legalization open," he said. "I know he never brings up his support of legalization in Iowa or in his stump speeches but he supports legalization, and I think his hope was once he got into the general election to then start talking about legalization as a way to attract more voters."

"What Rubio's doing...by going after Cruz on this issue is to say, 'Wait a minute, you've portrayed yourself as a straight talker and you're lying through your teeth,'" O'Connell told CBS News.

Craig Robinson, author of "The Iowa Republican" argued that the Fox News interview did more damage to Cruz than anything Rubio might unleash.

"Cruz seems to want things both ways looking back, but his own past press releases and interviews conflict with the tune he is now singing as a presidential candidate," he told CBS News. "I think this has the potential to hurt Cruz, especially with someone like Trump in the field who has made immigration a key issue in the race."

Losing his credibility on that issue would be a "devastating blow," veteran Iowa Republican Doug Gross told CBS News.

"If he's seen as duplicitous on something as fundamental to his image as immigration, they're not going to trust him on anything," he said.

Cruz has shifted even further to the right on immigration since 2013. At one time, he supported nearly doubling the amount of legal visas available, but now, the immigration plan he unveiled last month promises to "halt any increases in legal immigration so long as American unemployment remains unacceptably high." Where he was once vague on the question of whether he would support some sort of legal status for people who came to the U.S. illegally, he said at Tuesday's debate that he would "enforce the law" against people who are here illegally now - in other words, send them home.

Many Republicans in Iowa like that idea. Nearly half of likely Republican caucus goers say the U.S. should round up immigrants here illegally and send them home. Rep. Steve King, R-Iowa, an outspoken opponent of legalization and increased immigration levels, endorsed Cruz's presidential bid.

Cruz built an amnesty narrative against Rubio in Las Vegas again Thursday, suggesting the Rubio campaign thought they had made a "masterful decision" by supporting immigration reform in 2013.

"This was a move to co-opt all of the big-money Republican donors who support amnesty because for big business, amnesty means cheap labor," he said. "Two years later they regret having led the fight for amnesty and so, they're trying to blur the record by claiming those who opposed amnesty somehow agreed with them. It is complete and utter nonsense."