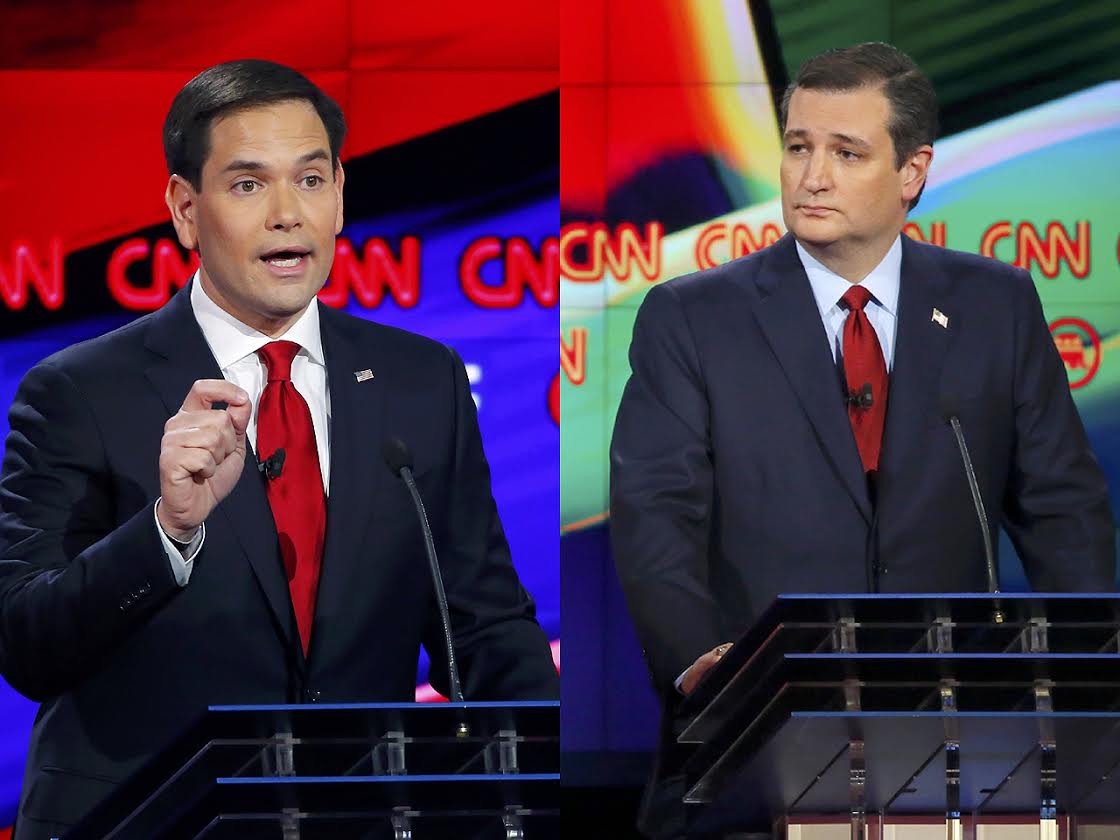 After months of letting front runner Donald Trump have an outsized influence on the 2016 race, the other Republican presidential candidates in Tuesday night's debate appeared anxious to remind voters: there are a few other candidates worth considering.

And for the two candidates best poised to replace Trump should he ever lose his lead -- Sens. Marco Rubio and Ted Cruz -- it meant attacking each other. The two senators sparred over a range of issues including NSA surveillance, immigration, federal budget cuts, and the support of "moderate rebels" in the Middle East.

"Look, I understand Marco wants to raise confusion," Cruz said at one point during an extended exchange between the two candidates over immigration. It was one of several instances in the debate in which Cruz suggested Rubio was not being completely honest.

Rubio, who could emerge in the weeks ahead as the preferred candidate for the GOP establishment, defended his 2013 attempt to work with Democrats on immigration reform. He also argued that Cruz is softer on immigration than the Texan lets on.

"As far as Ted's record, I'm always puzzled by his attack on this issue," Rubio said, noting his support for increased green cards and H-1B visas. "So I think what's important for us to understand is, there is a way forward on this issue." The H-1B visa is a temporary visa for highly skilled foreign workers.

While defending his record on immigration policy, Rubio went on offense over military spending, attacking Cruz for voting against the National Defense Authorization Act (NDAA).

After Cruz promised to "utterly and completely destroy ISIS" with air power, Rubio countered, "You can't carpet-bomb ISIS if you don't have planes and bombs to attack them with. And if we continue those cuts that we're doing now... we are going to be left with the oldest and the smallest Air Force this country has ever had."

Rubio also slammed Cruz for supporting the USA Freedom Act, which stopped the National Security Agency's bulk collection of phone metadata. "The metadata program was a valuable tool that we no longer have at our disposal," he said.

While Rubio and Cruz were ready to challenge each other, Cruz was far less inclined to confront Trump.

Asked about Trump's controversial proposal to bar all Muslims from entering the U.S., Cruz said that "everyone understands" why Trump would call for such drastic action. He blamed the Obama administration's policies for inspiring Trump.

Former Florida Gov. Jeb Bush, by contrast, stood by his assertion that Trump is "unhinged."

"Donald, you know, is great at the one-liners, but he's a chaos candidate. And he'd be a chaos president," Bush said. "He would not be the commander in chief we need to keep our country safe."

While slamming Trump, Bush also used the opportunity to present himself as a "serious" candidate. He bullet pointed his plan to destroy ISIS.

"The refugee issue will be solved if we destroy ISIS there, which means we need to have a no-fly zone, safe zones there for refugees and to build a military force," Bush said. "We need to embed our forces -- our troops -- inside the Iraqi military. We need to arm directly the Kurds. And all of that has to be done in concert with the Arab nations. And if we're going to ban all Muslims, how are we going to get them to be part of a coalition to destroy ISIS?"

Trump in the past has left Bush tongue-tied with insults directed at the former governor's policies and personality, but Bush was ready to return the fire on Tuesday night.

"Donald, you're not going to be able to insult your way to the presidency," Bush told Trump at one point, prompting cheers from the audience. "Leadership is not about attacking people and disparaging people. Leadership is about creating a serious strategy to deal with the threat of our time."

Trump retorted, "With Jeb's attitude we will never be great again," only to hear boos from the Las Vegas audience.

While Jeb tried to act as if he was taking the high road, he wasn't above mocking Trump for some of his past remarks. For instance, in August, when asked where he gets his military advice, Trump said on NBC, "Well, I watch the shows."

For most of the candidates lingering in the single digits in polls, Tuesday night's debate was simply one more opportunity to introduce themselves to voters. New Jersey Gov. Chris Christie mentioned no fewer than five times that he fought terrorism as a federal prosecutor.

"The fact is, for seven years, I had to make... decisions after 9/11, make a decision about how to proceed forward with an investigation or how to pull back, whether you use certain actionable intelligence or whether not to," Christie said. "This is the difference between actually being a federal prosecutor, actually doing something, and not just spending your life as one of hundred [senators] debating it."

As a tech executive, "I got a phone call from the NSA," she said. "They needed help. I gave them help... We need the private sector's help, because government is not innovating. Technology is running ahead by leaps and bound. The private sector will help, just as I helped after 9/11. But they must be engaged, and they must be asked. I will ask them. I know them. "

Ohio Gov. John Kasich, after unsuccessful attempts in prior debates to attack Donald Trump, recast himself as an experienced statesman who can bring people together.