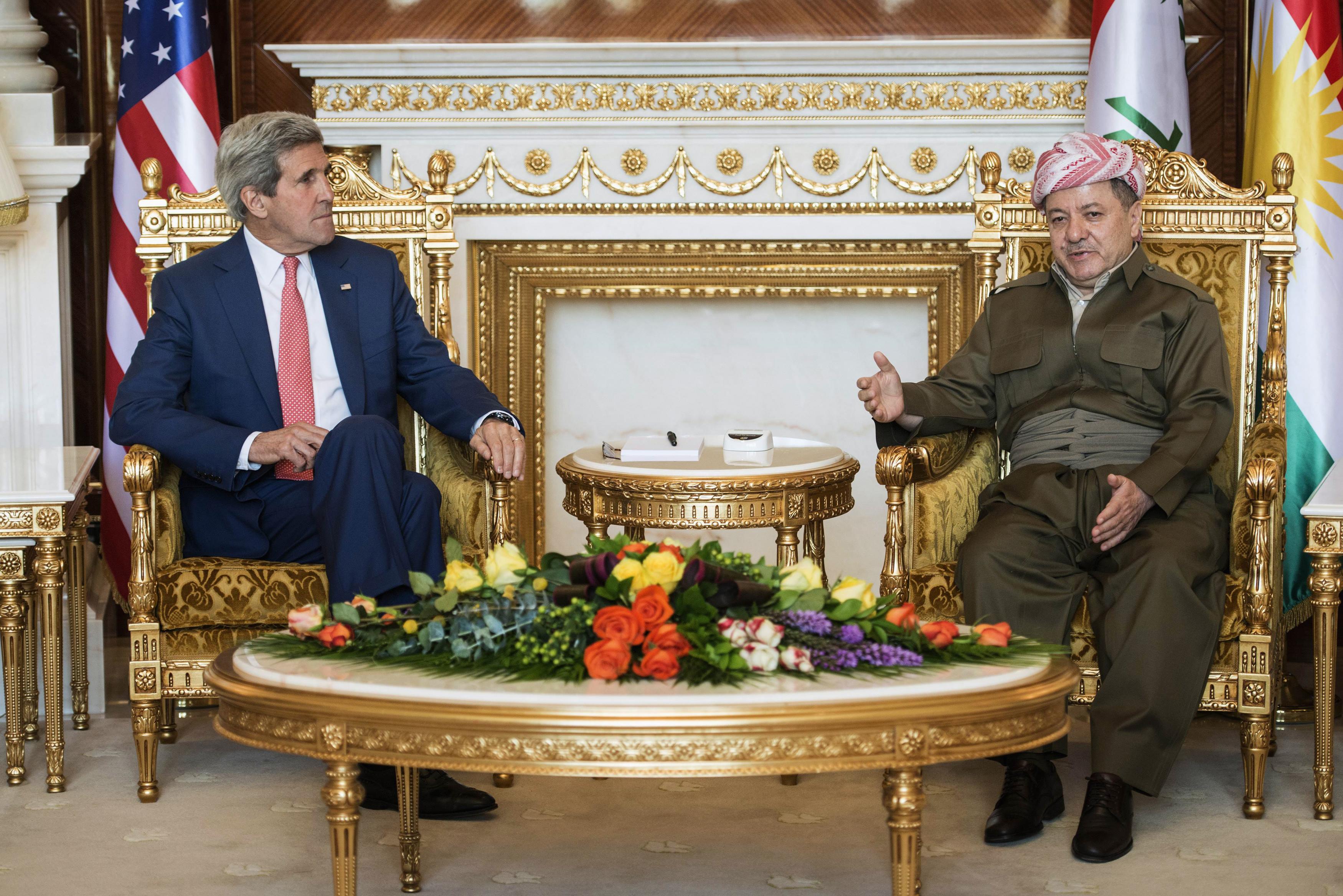 ERBIL, Iraq -- The top U.S. diplomat returned to Iraq on Tuesday for the second day in a row, again trying to convince one of its political leaders that overhaul of the Shiite-led government is the best way to deflate a raging Sunni insurgency that is pushing the country toward civil war.

CBS News correspondent Margaret Brennan says Secretary of State John Kerry was in Erbil to have a "heart to heart with Kurdish officials," according to a senior U.S. official, and make it clear that the Obama administration believes it is in "nobody's interest to have kind of al Qaeda on steroids" on its southern border.

The only way to prevent that happening, U.S. officials believe, is to make sure a moderate Sunni component is able to clear territory seized by ISIS, and to do that the Kurds need to remain part of the Iraqi government. The U.S. official, who spoke to CBS News on the condition of anonymity, said that if the Kurds decide to withdraw from the Baghdad political process, "it will accelerate a lot of the negative trends" in Iraq and the wider region.

Kerry arrived in Erbil, the capital of Iraq's northern, autonomous Kurdish region, for talks with a key local leader who has feuded for years with Prime Minister Nouri al-Maliki. Kerry is hoping that support from Kurdish regional President Massoud Barzani will force al-Maliki to cede more power to Iraq's Sunni and Kurdish minorities and, in turn, soothe anger directed at Baghdad that has fueled the insurgent Islamic State of Iraq and Syria (ISIS).

Barzani declared that "we are facing a new reality and a new Iraq" as the country considers new leadership for its Shiite-led government as an immediate step to curb a Sunni insurgent rampage.

Barzani told Kerry that Kurds are seeking "a solution for the crisis that we have witnessed."

Kerry said at the start of an hour-long private meeting that the Kurdish security forces known as peshmerga have been "really critical" in helping restrain the advance of the Islamic State of Iraq and the Levant, a Sunni insurgency that has overtaken several key areas in Iraq's west and north, and is pushing the country toward civil war.

"This is a very critical time for Iraq, and the government formation challenge is the central challenge that we face," Kerry said. He said Iraqi leaders must "produce the broad-based, inclusive government that all the Iraqis I have talked to are demanding."

Barzani's support is important because Kurds represent about 20 percent of Iraq's population and usually vote as a unified bloc. That has made Kurds kingmakers in Iraq's national political process.

Tensions have run deep for years between Barzani and al-Maliki, and recently surged again when the Kurdish regional government began exporting oil through Turkey without giving Baghdad a required share of the profits. The Kurdish region is home to several vast oil fields, which have reaped security and economic stability unmatched across the rest of the Iraq.

Kerry met several top Iraqi leaders in Baghdad on Monday, including al-Maliki, in what was later described as a tit-for-tat discussion of frustration and few compromises. Still, Kerry said all the leaders agreed to start the process of seating a new government by July 1, which will advance a constitutionally-required timetable for distributing power among Iraq's political blocs, which are divided by sect and ethnicity.

The Kurds "have to be a critical part of that process," the U.S. official stressed to Brennan on Tuesday.

Brennan reports that while the Obama administration believes the majority of Kurds consider ISIS a significant threat, and worry over the territorial gains the terror group has made, there is a minority in the Kurdish region who think the problem is primarily one for the central government in Baghdad, and could even benefit the Kurds by allowing them to claim more independence.

"I think there's a debate going on in the Kurdish region with some people saying, 'hey, this is actually pretty good, look what's happening here,' and others saying, 'so we should just kind of build a moat and kind of do our own thing,'" the U.S. official told Brennan, stressing that it was believed to be "a minority debate."

Once a stable government is in place, officials hope Iraqi security forces will be inspired to fight the insurgency instead of fleeing, as they did in several major cities and towns in Sunni-dominated areas since the start of the year.

U.S. special forces began arriving in Baghdad this week to train and advise Iraqi counterterror soldiers, under order from President Obama, who is reluctantly sending American military might back to the war zone it left in 2011 after more than eight years of fighting. Al-Maliki has for months requested U.S military help to quell ISIS, also known as ISIL, and the Obama administration has said it must respond to the insurgent threat before it spreads beyond Iraq's borders and puts the West at risk of attack.

On Monday, Kerry said the U.S. is prepared to strike the militants even if Baghdad delays political reforms.

Speaking to CBS News' Brennan in Erbil on Tuesday, however, Kerry said the U.S. would not engage in military action in Iraq until it believed there was a political environment that could help sustain any advantage gained by American military firepower.

"We're not making a decision about American force in a vacuum," he told Brennan, explaining that any U.S. military commitment was "tied to success in the long run." That, Kerry said, could only come from "leadership that can unify Iraq."