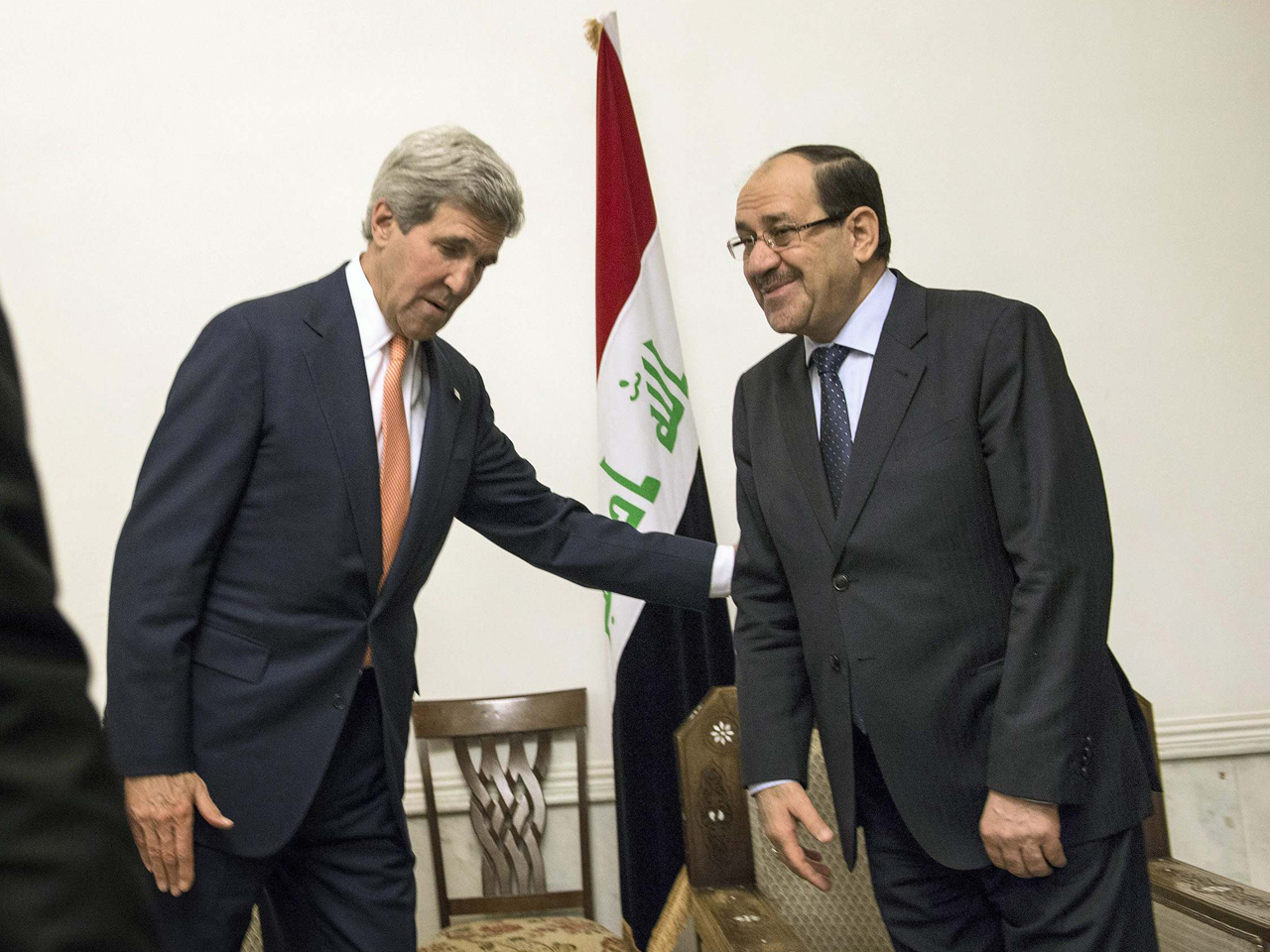 BAGHDAD -- Confronting the threat of civil war in Iraq, U.S. Secretary of State John Kerry flew to Baghdad on Monday and personally urged the Shiite-led government to give more power to political opponents before a Sunni insurgency seizes more control across the country and sweeps away hopes for lasting peace.

The meeting between Kerry and al-Maliki was never expected to be friendly, given that officials in Washington have floated suggestions that the Iraqi premier should resign as a necessary first step toward quelling the vicious uprising.

Brennan says that while the Obama administration has made clear it would not mind seeing a new prime minister in Iraq, it has stopped short of actually asking al-Maliki to step down.

Still, Kerry appeared encouraged after the discussion with al-Maliki. Walking to his motorcade after the meeting, he said "that was good." Kerry also met with the influential Shiite cleric, Ammar al-Hakim, and with Parliament Speaker Osama al-Nujaifi and Deputy Prime Minister Saleh al-Mutlaq, the nation's two highest-ranking Sunnis.

Speaking to reporters at a news conference later Monday, Kerry stressed the importance of making all of Iraq's sects and religions feel invested in the country's leadership. He said it was a "critical moment" for Iraq's future, and called on all of Iraq's leaders to come together and "stand united" against the militants.

There was little hope, however, that Kerry's visit could bring any immediate, tangible results, as al-Maliki has shown no sign of leaving and Iraqi officials have long listened to -- but ultimately ignored -- U.S. advice to avoid appearing controlled by the decade-old specter of an American occupation in Baghdad.

A U.S. official told Brennan on Monday that it "remains to be seen" whether al-Maliki is capable of forming a new, inclusive government to ease the tensions tearing his country apart.

Still, having suffered together through more than eight years of war -- which killed nearly 4,500 American troops and more than 100,000 Iraqis -- the two wary allies are unwilling to turn away from the very real prospect of the Mideast nation falling into a fresh bout of sectarian strife.

"This is a critical moment where, together, we must urge Iraq's leaders to rise above sectarian motivations and form a government that is united in its determination to meet the needs and speak to the demands of all of their people," Kerry said a day earlier in Cairo. He was there in part to meet with Egyptian President Abdel-Fattah el-Sissi to and discuss a regional solution to end the bloodshed by the insurgent Islamic State of Iraq and Syria (ISIS).

"No country is safe from that kind of spread of terror, and none of us can afford to leave that entity with a safe haven which would become a base for terror against anyone and all, not only in the region but outside of the region as well," Kerry said in Cairo.

Mr. Obama last week said he would send about 300 special forces troops to Baghdad to advise and train local security forces. Mr. Obama has not ruled out the possibility of also launching airstrikes against the insurgents, but that is not expected anytime soon, if ever, and he has adamantly said he will not send combat forces back to Iraq.

Iraqi officials briefed on the Kerry's talks with the Iraqi prime minister said al-Maliki urged the United States to target the militants' positions in Iraq and neighboring Syria, citing training camps and convoys with airstrikes. The officials said Kerry responded by saying a great deal of care and caution must be taken before attacks are launched to avoid civilian casualties that could create the impression that Americans are attacking Sunnis.

"There's no magic airstrike that's going to change the entire situation," the U.S. official told Brennan on Monday. He said there was "a lot of anxiety, a lot of looking to the U.S. for help," among officials in Baghdad, and noted that a U.S. intelligence operations center was already being set up in the country with the aim of collecting information and sharing it with reliable Iraqi military units that are well supplied and equipped.

In a remark which conveyed the Obama administration's real worry about ISIS' advance and capabilities in western Iraq, the official who spoke to Brennan on Monday described the group as "an army," saying the battle for one of the recently fallen cities along the Syrian border lasted three days and started with artillery barrages every morning followed by a three-pronged offensive conducted with military proficiency.

Since the start of this year, and peaking this month, ISIS (also known as the Islamic State of Iraq and the Levant, or ISIL) has overtaken several major cities in Iraq's west and north. The militants now control all major border crossing points between Iraq and Syria, seizing al Qaim on Saturday, and finally on Sunday, al-Walid, the last major border station under Iraqi control, was overrun by gunmen.

There were unconfirmed reports Monday that a major border crossing with Jordan, in the south, had also been seized by Sunni fighters. Many smaller Sunni tribal militias have joined ISIS to fight against government forces in recent weeks, but the level of trust and cooperation between those groups and ISIS remains unclear, and likely varies greatly depending on the location.

CBS News correspondent Clarissa Ward reported from Baghdad that the seizures will allow ISIS to move heavy weapons and large numbers of fighters quickly and easily between their territory in both countries.

The U.S. official who spoke to Brennan on Monday put the losses down to a lack of "force density" by the Iraqi military in the area, because they've had to shift forces elsewhere as the government focuses on protecting the capital and key Shiite cities in the south.

Even before U.S. troops left Iraq for good at the end of 2011, a merciless Sunni insurgency was pounding the country with car bombs, roadside explosions, suicide bombings and drive-by assassinations, mainly targeting the Shiite government, its security forces and Shiite pilgrims.

The three-year civil war in Syria -- where Sunni rebels are fighting to overthrow President Bashar Assad, whose Alawite sect is an offshoot of Shiite Islam -- emboldened Iraqi insurgents who regularly traverse the porous border to gain recruits, funding and weapons, and battlefield confidence. Years of political instability in Baghdad fueled anger against the Shiite-led government from Sunnis who felt powerless and saw their leaders targeted by al-Maliki's security forces.

A senior State Department official said the insurgents' recent march on Baghdad has been slowed, although concerns remain that ISIS will attack the golden-domed Shiite shrine to the Imam al-Askari in Samarra. That city, in Sunni territory in north-central Iraq, was the site of a 2006 bombing that triggered the worst of the war's sectarian fighting. Last week, Senate Majority Leader Harry Reid declared that Iraq is currently in a civil war.

The official said Kerry on Monday will not ask al-Maliki to resign, as some in the U.S. and Sunni Arab states in Mideast have demanded, because "it's not up to us." However, Kerry is expected to urge al-Maliki to quickly create a new government that is far more sensitive to Sunni and Kurdish demands for jobs, power and a fair legal system.

Currently, Baghdad is operating under a lame-duck government, as a new parliament that was elected in April has not yet selected its Cabinet ministers. It took more than nine months to seat a new government the last time Iraq underwent the process, in 2010. This time around, the State Department official said, al-Maliki and other Iraqi officials cannot risk exacerbating the political instability, and further inflaming the insurgency, by stalling a new and more inclusive government.

Both President Obama and Iraq's top Shiite cleric, Grand Ayatollah Ali al-Sistani, also have urged al-Maliki to quickly form an inclusive government that promotes the interests of all of Iraq's ethnic and religious groups.

Brennan reports that U.S. officials understand Iran's Shiite clerical leadership has enormous influence in Iraq, but say it is sending mixed signals about who should run the neighboring country.