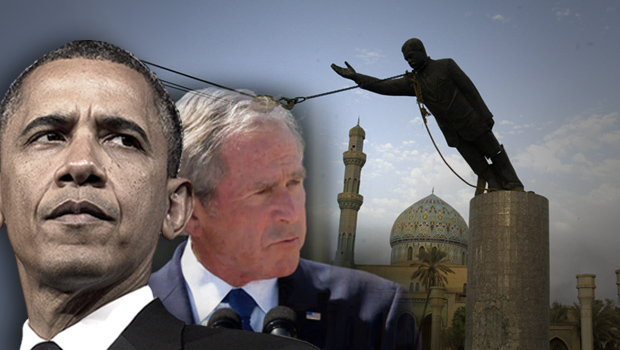 Discussions of U.S. involvement in stemming the violence in Iraq are occurring amid a backdrop of highly negative views of the Iraq war, a new CBS News/New York Times poll out Monday reveals.

Just 18 percent of Americans think the result of the war in Iraq was worth the loss of American lives and other costs of attacking Iraq, the lowest percentage ever recorded in CBS News Polls. Seventy-five percent do not think the Iraq War was worth it, up eight percentage points since 2011 (just before all U.S. troops were removed), and up 30 points since August 2003.

Republicans, Democrats and independents alike view the Iraq war as not worth the costs.

More Americans from households with either an Iraq or Afghanistan War veteran think the U.S. should have left some troops behind in Iraq (43 percent), but they agree with Americans overall (20 percent) that the Iraq War was not worth the loss of life and other costs.

When Americans are asked about a range of military options in Iraq, there is support for some actions, but not others. A slim majority of Americans (51 percent) favor sending military advisers into Iraq to train and advise the Iraqi military and collect intelligence, which President Obama has proposed. Forty-two percent oppose it. There is bipartisan support for this plan.

Nevertheless, four in 10 don't think that will have much of an effect on the violence there. Twenty-eight percent think sending advisers will increase the violence there, while 23 percent expect it to decrease.

In addition to sending military advisers into Iraq, there is public support for using unmanned aircraft or drones to target militants in Iraq - something the president has not ruled out. But there is less support for airstrikes using manned aircraft.

Large majorities (77 percent), however, oppose sending U.S. ground troops into Iraq -- something President Obama has said the U.S. will not do.

Republicans are more likely than Democrats or independents to support the use of drones and as well as manned airstrikes (although most oppose sending ground troops).

Two-thirds of Americans have heard or read at least some about the recent violence in Iraq, but just 36 percent have heard or read a lot about it. Those who have been paying the most attention to news about Iraq are more inclined to think the U.S. has a responsibility there and that the President should be doing more about it.

Americans express concern that U.S. intervention in Iraq now will lead to a long and costly involvement there. More than eight in 10 are at least somewhat concerned about that, including 54 percent who are very concerned.

Fifty-three percent of Americans favor the U.S. working with Iran in a limited capacity to resolve the situation in Iraq. Republicans divide on this course of action, but 62 percent of Democrats favor it.

Eight in 10 Americans think what happens in Iraq is at least somewhat important to the interests of the United States, though just a third think it is very important.

Still, many Americans are concerned that the violence in Iraq will lead to a more widespread war in neighboring countries and other parts of the Middle East. Forty-two percent are very concerned, and another 37 percent are somewhat concerned.

Most Americans think the situation in Iraq will impact prices at the pump. Eighty-three percent expect gas prices in the U.S. to go up in the wake of the violence in Iraq. Americans across partisan lines hold this view.

The Threat of Terrorism

Some expect there to be repercussions in the U.S. from the violence in Iraq. Forty-four percent of Americans think the threat of terrorism against the U.S. will increase as a result of the current violence there, but more - 50 percent - think it will remain unchanged. Most Republicans (60 percent) think the terrorism threat against the U.S. will increase, while Democrats and independents are more doubtful.

Broadly speaking, most Americans (58 percent - including most Republicans, Democrats, and independents) do not think the U.S. should take the leading role among all other countries in the world in trying to solve international conflicts. Support for U.S. involvement in international conflicts has declined since the beginning of the Iraq War, when nearly half thought the U.S. should take the lead role.

This poll was conducted by telephone June 20-22, 2014 among 1,009 adults nationwide. Data collection was conducted on behalf of CBS News and The New York Times by SSRS of Media, PA. Phone numbers were dialed from samples of both standard land-line and cell phones. The error due to sampling for results based on the entire sample could be plus or minus three percentage points. The error for subgroups may be higher Results based on the sample of veterans is plus or minus eight points. Interviews were conducted in English and Spanish. This poll release conforms to the Standards of Disclosure of the National Council on Public Polls.