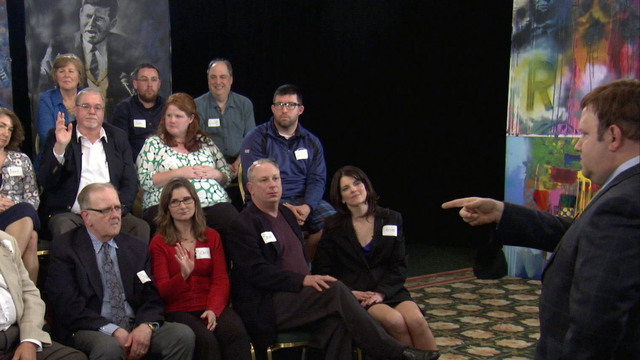 Former Florida Governor Jeb Bush has not convinced Republicans in New Hampshire that he has what it takes to defeat Hillary Clinton in 2016, if a focus group conducted by Republican strategist and CBS News contributor Frank Luntz is any indication.

Asked outright by Luntz who would win in a head-to-head general election matchup between the two, his group of New Hampshire Republicans and independents largely responded with a one-word prediction - "Hillary" - although none in the room would support her.

So what's the objection to Bush, who declares his candidacy Monday? Much of it is the name.

"I think the uninformed voters will not vote for him 'cause they're not gonna know what his stances are. They're gonna know he's a Bush and he's not gonna be electable," a member of the focus group named Karen said.

Even Bush, who's been asked about his brother repeatedly during the pre-campaign phase, seemed to acknowledge the disadvantages inherent in his surname, as he revealed his campaign logo over the weekend, "Jeb!" sans surname.

The group also agreed that they're a little tired of hearing about both Bush and Clinton, and are still looking for other names to enter the race.

"I think the comment that his mother made several months ago -- out of all the people that can run for president, we really need just the Clintons and the Bushes running?" one member of the panel said.

But the other observation from Luntz is that GOP voters are concerned Bush is "a little too gentle." Having the "heart to help people rise up," one of the themes of his announcement Monday, isn't winning over his base.

Members of the panel also complained that Bush doesn't have enough charisma.

"He doesn't inspire the next generation. I think we've experienced Bushes and we've experienced old, white men running for the Republican party," Glen said. "But, I mean, to Obama's credit, he inspired the youth. And I think Rubio did that. I think Walker's story could do that. I don't see Jeb Bush doing that," Glen said.

Bush's entrance into the race Monday will focus on his experience as governor. While several members praised his eight years as Florida governor, Luntz said that focus could also prove troublesome, largely because it's also been eight years since he held office.

"We've asked questions, 'Do you want a candidate who's focused on bringing America forward or do you want a candidate that's focused on bringing American back?' And by two to one they're looking at the future rather than the past and that's a challenge for Jeb," Luntz said. And that future may be easier to imagine with candidates who are currently in office, like Sen. Rubio or Gov. Walker.

"At this point either Marco Rubio or Scott Walker are capturing greatest percentage of those in the future. And they both -- very passionate, very strong," Luntz said.

Why the Louisiana coastline is "being eaten away fast"

Teen climate activist on how Asperger's helps her cause