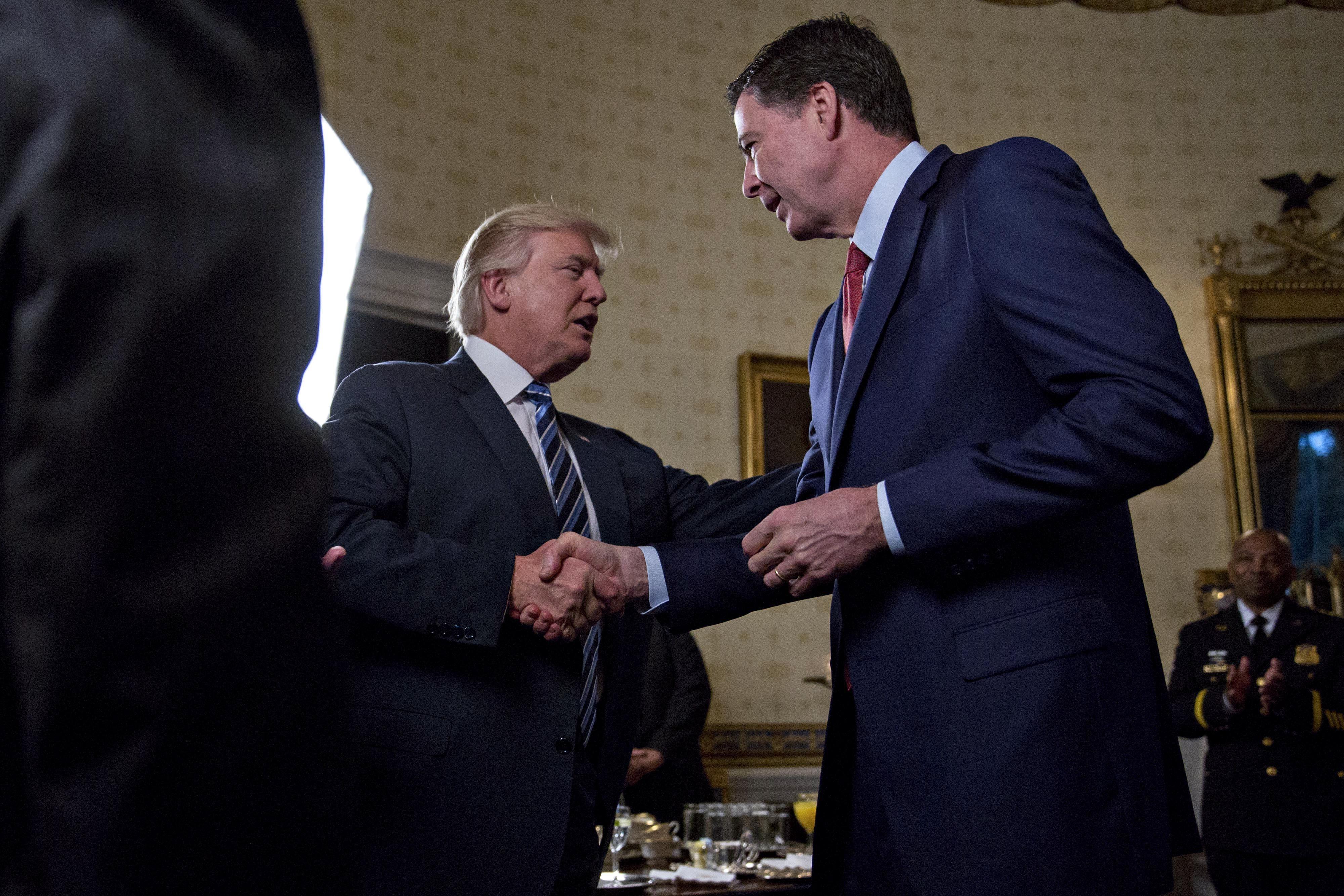 Fired FBI Director James Comey testified before the Senate Intelligence Committee Thursday about his interactions with President Trump and his role in investigating potential Russian interference in the presidential election.

In prepared remarks released by the committee Wednesday, Comey offered a detailed account of his conversations with the president before his abrupt May 9 firing and the contemporaneous memos he created from them. Comey wrote in the remarks that he spoke directly with Mr. Trump a total of nine times -- three times in person and six times over the phone. According to the prepared remarks, Comey "felt compelled" to keep contemporaneous notes after each conversation, the first of which occurred before Mr. Trump took office.

The private interactions between Mr. Trump and Comey are laid out in explicit detail in Comey's testimony. In one conversation, Mr. Trump told him, "I need loyalty. I expect loyalty," according to Comey's testimony. After a meeting at the White House in February, Mr. Trump urged him to drop the FBI's investigation into former National Security Adviser Michael Flynn, Comey wrote in his testimony.

But the history between Mr. Trump and Comey long predates Thursday's testimony. Here is a timeline of the events that led to Comey's conversations with the president, his ultimate ouster and his long-awaited testimony.

July 2016: The FBI, under James Comey, opens its investigation into Russian meddling into the 2016 U.S. presidential election.

July 5, 2016: Comey publicly announces he will not recommend charges be filed against Democratic nominee Hillary Clinton for her use of a private email server while secretary of state. Comey's announcement draws fire from members of both parties, including Mr. Trump:

"Russia, if you're listening, I hope you're able to find the 30,000 emails that are missing," he said. "I think you will probably be rewarded mightily by our press."

Oct. 28, 2016: Comey sends his famous letter to Congress informing members the FBI is investigating a new batch of emails related to Clinton's personal email server. Mr. Trump immediately seizes on the disclosure, telling a crowd, "We must not let her take her criminal scheme into the Oval Office."

Nov. 6, 2016: Comey writes in another letter to Congress that nothing in the new emails changes the conclusion the FBI made about Clinton's emails in July.

Nov. 13, 2016: In his first interview as president-elect, Mr. Trump tells "60 Minutes" he hasn't decided whether to keep Comey as FBI director.

Dec. 29, 2016: President Obama announces new sanctions against Russia for its interference in the campaign, expelling 35 Russian diplomats. Ret. Lt. Gen. Michael Flynn, a senior Trump campaign adviser and transition official, makes five phone calls to Russian Ambassador to the U.S. Sergey Kislyak, in which the two discuss the new round of sanctions.

Jan. 6, 2017: Comey and other intelligence officials travel to Trump Tower in New York to brief the president-elect on the intelligence community's findings about Russian interference in the campaign. According to Comey's prepared Senate testimony, he is chosen to inform Mr. Trump privately of salacious material gathered by a former British intelligence official that the U.S. had not verified.

This is the first time Comey meets Mr. Trump. He begins a practice of taking notes about their private conversations, typing his recollections on a laptop in the car immediately after leaving Trump Tower, according to his testimony.

Jan. 22, 2017: During a reception for law enforcement at the White House, Mr. Trump shakes hands with Comey and jokes that Comey has "become more famous than me."

Jan. 27, 2017: Comey is invited to dinner at the White House with Mr. Trump. According to Comey's account, he had expected others to attend, but found himself alone with the president in a dining room. Further, the dinner progressed into a "very awkward conversation," with Mr. Trump telling Comey, "I need loyalty, I expect loyalty," according to Comey, who "didn't move, speak, or change" his facial expression "in any way during the awkward silence that followed."

"We simply looked at each other in silence," Comey says.

Comey writes a "detailed memo" immediately after the dinner, sharing it with senior FBI leadership but keeping it unclassified.

Feb. 9, 2017: Investigators learn that Flynn did discuss U.S. sanctions on the phone with Kislyak, despite Vice President Pence's public denial. A source close to the vice president tells CBS News that his statement was based on what Flynn personally told him.

Feb. 14, 2017: Following a meeting in the Oval Office, Mr. Trump asks Comey to stay behind to "talk about Mike Flynn," according to Comey's testimony. Mr. Trump allegedly tells Comey that Flynn "is a good guy," saying he hopes Comey "can let this go." Comey is noncommittal and briefs senior FBI leadership on the "very concerning" interaction, Comey writes. Comey does not inform DOJ officials about what Mr. Trump said, but implored Attorney General Jeff Sessions to prevent future one-on-one discussions between the two, according to the testimony. Sessions does not reply, Comey says.

Feb. 24, 2017: Mr. Trump takes to Twitter to criticize the FBI for failing to find the source of leaks in the administration, a concern Mr. Trump also raised with Comey, according to Comey's testimony.

March 2, 2017: Attorney General Jeff Sessions recuses himself from the Russia investigation after previously undisclosed meetings with Kislyak come to light. The deputy attorney general is now responsible for overseeing the department's involvement.

March 6, 2017: Law enforcement sources tell CBS News that Comey was angered by the president's tweets, and asked the DOJ to refute the claims. The department did not act.

March 20, 2017: Comey confirms the investigation into Russian interference in the presidential election during a hearing before the House Intelligence Committee. Comey also says he has "no information" to support Mr. Trump's allegation that Mr. Obama wiretapped him.

March 30, 2017: According to Comey's testimony, Mr. Trump calls him at the FBI to ask if Comey could "lift the cloud" of the Russia investigation. Comey allegedly tells the president the investigation is proceeding as quickly as possible.

Mr. Trump also asks Comey about the March 20 hearing, Comey says. Comey allegedly tells Mr. Trump that he informed congressional leaders the FBI is not "personally investigating" Mr. Trump. The president says, "We need to get that fact out," according to Comey's testimony, and says "the cloud" of the investigation is harming his ability to "make deals for the country."

April 11, 2017: Mr. Trump calls Comey again to follow up on his directive to "get that fact out," according to Comey. Comey tells Mr. Trump the White House counsel's office should make the request with the Justice Department, Comey writes.

According to Comey, the president says he would do that, adding, "Because I have been very loyal to you, very loyal; we had that thing you know." Comey says he doesn't know what "thing" Mr. Trump is referring to, according to Comey's account.

"That was the last time I spoke with President Trump," Comey writes in his testimony.

May 2, 2017: Mr. Trump tweets that Comey was "the best thing that ever happened to Hillary Clinton."

May 3, 2017: Comey testifies before the Senate Judiciary Committee to discuss the circumstances surrounding the Clinton email investigation. Comey tells the committee it makes him "mildly nauseous" to think he affected the outcome of the election, but that had no regrets and would do the same again.

May 8, 2017: Mr. Trump meets privately with Sessions and Rosenstein about Comey. Rosenstein expresses concerns about Comey, and the president asks Rosenstein to put those concerns in writing so that he could review them.

A pool report sent to the press at 5:42 p.m. says that White House press secretary Sean Spicer told reporters in the briefing room that Mr. Trump accepted recommendations from the attorney general and deputy attorney general regarding Comey's dismissal.

Comey is in Los Angeles, addressing agents in the LA field office. He sees news of his firing on televisions playing in the room, at first thinking it must be part of a prank.

The White House releases three documents: a memo from Rosenstein, a letter from Sessions to Mr. Trump and an official statement from Spicer, saying Mr. Trump acted "based on the clear recommendations" of the two DOJ officials.

"When I decided to just do it, I said to myself, I said, 'You know, this Russia thing with Trump and Russia is a made-up story,'" Mr. Trump said. "'It's an excuse by the Democrats for having lost an election that they should have won.'"

May 12, 2017: Mr. Trump hints at the existence of "tapes" of his conversations with Comey.

May 16, 2017: The New York Times reports Mr. Trump asked Comey to end the investigation into Flynn, revealing the existence of Comey's contemporaneous memos.

May 17, 2017: Rosenstein, the deputy attorney general, appoints former FBI Director Robert Mueller as special counsel to take over the investigation into Russian meddling.

May 22, 2017: The Washington Post reports Mr. Trump asked Director of National Intelligence Dan Coats and NSA Director Rogers to "publicly deny the existence of any evidence of collusion during the 2016 election" after Comey's March testimony.

June 1, 2017: The Senate Intelligence Committee says Comey will testify in closed and open hearings on June 8.

June 7, 2017: In testimony before the Senate Intelligence Committee, both Coats and Rogers refuse to comment on conversations they've had with Mr. Trump, though Rogers said he's never "been directed to do anything illegal, immoral, unethical or inappropriate."