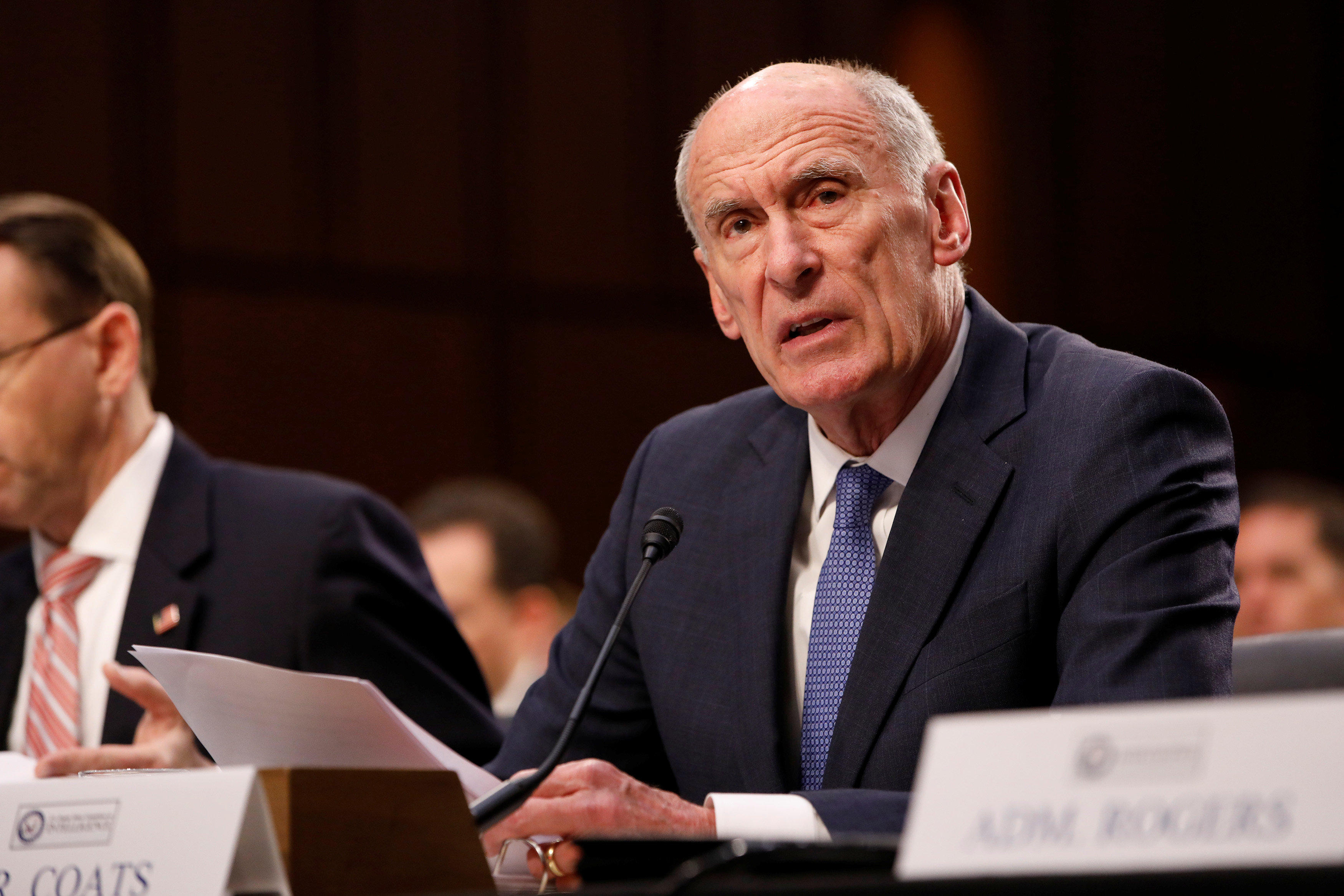 The hearing was focused on the Foreign Intelligence Surveillance Act (FISA), though there were a slew of questions involving the firing of former FBI Director James Comey and Russian interference in the 2016 U.S. election.

This comes a day before Comey is set to testify publicly before Congress for the first time on Thursday since President Trump fired him as FBI director last month.

Burr said he had one final message that he wants the witnesses to deliver to the Trump administration. He said that in cases where there's sensitivity of activities, there is a mechanism for congressional oversight whereby officials can brief and notify the Gang of Eight, which includes congressional leadership in both the House and Senate and on both sides of the aisle.

"At no time, should you be in a position to come to Congress without an answer," Burr warned them.

Warner says "the president is not above the law"

Warner said that he's come out of the hearing "with more questions than when I went in." He said that Coats and Rogers were both willing to characterize their conversations with the president, arguing that they didn't feel pressure, but Warner ridiculed them for not sharing the content of those discussions.

Warner said he's "pretty frustrated" that there is a deference to a special prosecutor and he said while their "feelings response" is important, so is the contents of their communications with Trump.

"The president is not above the law," Warner said.

Warner asked if it would be concerning if the president intervened in an investigation.

"If anybody obstructs an investigation, that would be a subject of concern," Rosenstein said, adding that it would investigated appropriately.

Cotton seeks to clarify how 702 works with U.S. citizens

Cotton, who has introduced a permanent extension of FISA, asked the officials if FISA's Sec. 702 allows the intelligence agencies to collect information on U.S. citizens. Rogers explained that they collect intelligence on foreigners outside the U.S. since NSA is a foreign intelligence organization. Rosenstein explained that if a foreigner is inside the U.S., the intelligence agencies have to rely on other provisions of FISA. Cotton asked McCabe what happens if an ISIS terrorist comes to the U.S., and he said that the NSA notifies the FBI and they work together to pursue coverage under a FISA statute.

King grills Rogers and Coats about why they're not answering questions

Sen. Angus King, I-Maine, who caucuses with Democrats, spent several minutes grilling Rogers and Coats about why they aren't answering questions regarding the Comey firing or the Russia probe.

Asked if the White House was invoking executive priviledge, Rogers said he wasn't aware of that. King then asked why he isn't answering questions. Rogers said, "I feel it isn't appropriate, senator" and added that he stands by his comment and he's not going to repeat himself and he said he doesn't mean it in a contentious way. King said that his questions are intended to be contentious.

Sen. Roy Blunt, R-Missouri, asked McCabe what happens when the FBI wants to follow up on or pursue a U.S. person in or outside the U.S. McCabe explained that they would seek a FISA warrant under Title I. Asked if the FBI ever seeks collection under 702, McCabe said that if the FBI has a full investigation on a foreign person in a foreign place, the bureau would nominate that person for 702 coverage at the NSA.

McCabe is asking about his conversations with Comey

Sen. Martin Heinrich, D-New Mexico, asked McCabe if he had a conversation with Comey about the president asking for Comey's loyalty. McCabe said he isn't in a position to comment because those matters fall within the scope of the special counsel's investigation. McCabe said he wants Comey to speak for himself when he testifies before the Intelligence panel on Thursday morning.

Coats said he doesn't take notes, Rosenstein said he rarely takes notes and that he's not going to answer questions on the Russia investigation. McCabe said he's not going to comment on any conversations he's had or if he wrote any notes. Rogers echoed that answer.

The Florida Republican asked if Coats and Rogers have ever been asked to influence an ongoing investigation. Coats said he's not prepared to answer in an open session. Rubio asked them if anyone ever asked them to issue a statement that wasn't true and Rogers and Coats refused to answer.

The unmasking process for the NSA, Rogers said, is defined in writing and in terms of who has the authority to unmask, he said there are 20 individuals in 12 different positions including Rogers. He said that the NSA outlines in writing what criteria will be applied in the request to unmask.

Rogers said that when a U.S. person is referenced in an intelligence report, they don't identify the person. Some of the recipients of the report, he said, will sometimes come back to the NSA and ask who the unnamed individuals are.

The criteria: He said that the recipient must request in writing that the person's identity be unmasked, the request must be made on the basis of the official's duties and the basis of the request must be that the official needs the identity to understand the intelligence he or she is reading. One of the 20 individuals, he said, would then agree or disagree to unmask and if the NSA unmasks, the unmasking goes back only to the person who made the request.

Coats also declines to comment on specific conversations with Trump

Warner brought up reports about the president asking Rogers and Coats to downplay the Russia investigation and that the president asked him and the CIA director to intervene with then-FBI Director James Comey.

Coats said he doesn't believe "it's appropriate for me to address that in a public session."

Warner raised reports about the president asking Rogers and Coats to downplay the Russia investigation. He asked Rogers whether in his experience, if it would be typical for the president to ask questions, to bring up an ongoing FBI probe, particularly if that probe involves people associated with the president or his campaign.

Rogers said he's "not going to discuss theoreticals" and he's not going to discuss specific conversations with the president. But, he said he would make one comment. He said in the more than 3 years that he has served as NSA director, he said, "I've never been directed to do anything illegal, immoral, unethical or inappropriate." He said he does not "recall feeling pressured" to do something.

Coats reveals case that he classified to illustrate the value of Sec. 702

He said that as a result of 702, the U.S. was able to find and kill ISIS's finance minister, Haji Iman, in March 2016. Coats said that the NSA, along with its intelligence community partners, spent over two years from 2014 to 2016 looking for Iman.

He explained that the NSA learned of a person "closely associated" with Iman and collected intelligence on the associate, forming a robust network. The NSA and its tactical partners, Coats said, combined the information and was able to identify Iman and track his movements. This allowed U.S. forces, he said, to attempt an apprehension of Iman in March 2016. The operation led to shots being fired at U.S. forces, which led to the killing of Iman and other associates at that location.

Coats, the director of national intelligence, in his opening joint statement, said that intelligence collection under 702 has produced and continues to produce "significant intelligence" that he said is "vital" to protect the nation from international terrorism, cyber threats and proliferation. He said it contains strong protections for privacy.

Coats said that since FISA was implemented a decade ago, there has been rigorous oversight over the program.

"We have never, not once, found an intentional violation of the program. There have been unintended mistakes," he said. "None of these mistakes has been intentional."

Warner, the top Democrat on the panel, acknowledged reports that Trump was thinking of the Russia probe when he fired Comey as FBI director. He said that lawmakers will have the opportunity Wednesday to ask Rosenstein about his role in the Comey firing. He highlighted reports that said that the president asked at least two leaders of the intelligence agencies to publicly downplay the Russia investigation and asked Coats and CIA Director Pompeo to pull back on the Russia probe.

"If any of this is true, it would be an appalling and improper use of our intelligence professionals," Warner said.

The chairman said that the panel's hearing highlights the most critical foreign intelligence tool -- FISA -- which he said expires on Dec. 31 unless Congress reauthorizes it. He spoke about Sec. 702 of Title 7 which he said provides the capability to target foreigners located outside the U.S. but whose foreign communications happen to be routed to and acquired in the U.S.

Burr said that the program is "exceptionally critical" to protecting Americans at home and abroad and in preventing terror attacks.

He acknowledged that there may be discussion about Russian interference in the 2016 election.

Milley defends himself over calls to China