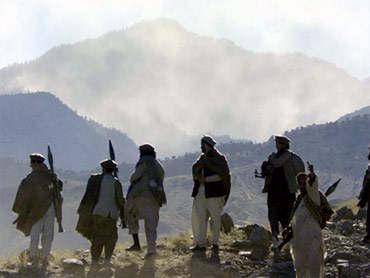 KABUL, Afghanistan -- The Islamic State of Iraq and Syria (ISIS) said its fighters had captured Osama bin Laden's infamous Tora Bora mountain hideout in eastern Afghanistan, but the Taliban on Thursday dismissed the claim, saying they were still in control of the cave complex that once housed the former al Qaeda leader.

Earlier, ISIS released an audio recording, saying its signature black flag was flying over the hulking mountain range. The message was broadcast on the militants' Radio Khilafat station in the Pashto language late on Wednesday.

It also said ISIS has taken over several districts and urged villagers who fled the fighting to return to their homes and stay indoors.

A Taliban spokesman denied ISIS was in control, claiming instead that the Taliban had pushed ISIS back from some territory the rival militants had taken in the area.

The Tora Bora mountains hide a warren of caves in which al Qaeda militants led by bin Laden hid from U.S. coalition forces in 2001, after the Taliban fled Kabul and before he fled to neighboring Pakistan.

According to testimony from al Qaeda captives in the U.S. prison at Guantamo Bay, Cuba, bin Laden fled from Tora Bora first to Afghanistan's northeastern Kunar province, before crossing the border into Pakistan. He was killed in a 2011 raid by U.S. Navy SEALs on his hideout in the Pakistani garrison town of Abbottabad.

Pakistan complained the raid violated its sovereignty while bin Laden's presence -- barely a few miles from the Pakistani equivalent of America's West Point military academy -- reinforced allegations by those who accused Pakistan of harboring the Taliban and al Qaeda militants. Pakistan denies such charges, pointing to senior al Qaeda operatives it has turned over to the United States.

Meanwhile, Taliban spokesman Zabiullah Mujahid told The Associated Press in a telephone interview that Taliban fighters had pushed back ISIS militants from areas of Tora Bora that they had earlier captured.

Mujahid claimed that more than 30 ISIS fighters were killed in the battle. He also claimed a U.S. airstrike on Taliban positions on Wednesday that killed 11 of its fighters had benefited ISIS.

The remoteness of the area makes it impossible to independently verify the contradictory claims.

Afghan officials earlier said that fighting between ISIS and the Taliban, who had controlled Tora Bora, began on Tuesday but couldn't confirm its capture.

While the United States estimates there are about 800 ISIS fighters in Afghanistan, mostly restricted to the eastern Nangarhar province, other estimates say their ranks also include thousands of battle-hardened Uzbek militants.

Last week Russia announced it was reinforcing two of its bases in Central Asia, in Tajikistan and Kyrgyzstan, with its newest weapons because of fears of a "spill-over of terrorist activities from Afghanistan" by the Afghan ISIS affiliate.

"The (ISIS) group's strategy to establish an Islamic caliphate poses a threat not only to Afghanistan but also to the neighboring countries," Russian Defense Minister Sergei Shoigu said.