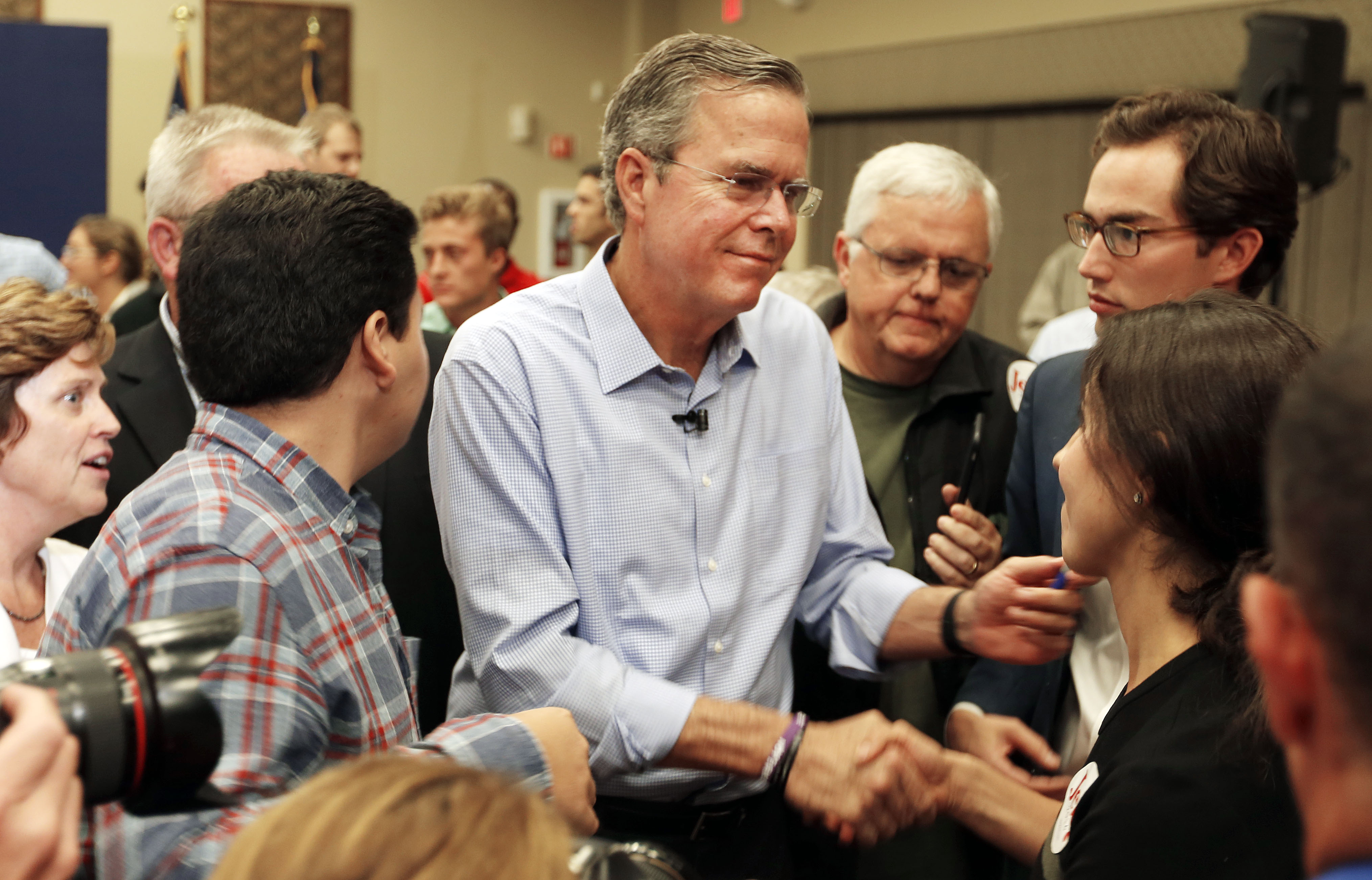 In recent days, New Hampshire polls have made clear what Republicans around the state have been whispering about for weeks: Jeb Bush hasn't exactly been a hit in the Granite State.

Bush's slipping poll numbers -- a CNN/WMUR New Hampshire survey released last week showed the former Florida governor falling from his second place standing in July poll to fifth place now -- have unsettled his supporters here and financial supporters around the country who know how important the Granite State is to Bush's candidacy.

That sentiment prompted this question to Bush at a town hall in Bedford on Thursday: "What would you have done differently," a young voter asked, "if you knew you would be struggling in the polls at this point in the race?"

"Polls don't matter," Bush fired back. "The guys back there with the cameras and the people who follow me around, they love the horserace because that's what kind of creates the tension to create the content for some of the shows and I respect that. I want to give them a little fodder once in awhile to keep them happy, but this is a long-haul race."

Bush went on to share the story of John McCain's upward battle to win New Hampshire and then the nomination - after his resources had dwindled during the 2008 campaign.

At 7 percent in the CNN/WMUR poll, Bush is trailing more outspoken 2016 candidates, including Donald Trump, Carly Fiorina, Ben Carson and Marco Rubio, R-Florida, in New Hampshire. A separate Wall Street Journal/NBC poll last week had more problematic news: a 15-point drop in his support among moderate and liberal conservatives -- the very GOP voters he is counting on to carry his campaign.

Bush supporters dismiss the polls as mere speed bumps in a state long known for bucking polls and conventional wisdom. It's only October, they say, and people are just starting to tune in to the election. Bush has 13 campaign staffers in the state - more than any other rival - and he has the most money in the bank.

So what's going on? New Hampshire campaign veterans say Bush has his challenges - mainly a surname that hurts more than it obviously helps and surprisingly lackluster campaign skills. His sometimes stiff presence on the stump contrasts with political performers like Rubio, whose upward tick in the polls has started to excite donors and potentially draw support from Bush.

That dynamic was evident at a Republican National Committee donor retreat in Washington this week. During a donor training session with GOP consultant Frank Luntz, the mention of Rubio's name generated huge applause in the crowd, eclipsing the more tepid reception for Bush when his name was mentioned. This worried Bush's financial supporters in the crowd, multiple GOP sources told CBS News. "It wasn't even close," one source familiar with the donor training told CBS News of the applause differential between the two.

The source added that the retreat prompted Sally Bradshaw, one of Bush's top advisors, to make a trip to DC Wednesday to calm donors nerves. The Bush campaign confirmed that Bradshaw was in D.C. but said that she makes periodic trips to the nation's capital.

Nevertheless, Bush is expected to surpass his $11.4 million second quarter fundraising total in the third quarter, according to a report from the Wall Street Journal - a number that may quiet the circuit of donor unease. Bush held 29 fundraisers from the beginning of August through September and his son, Jeb Jr., and his wife, Columba, hosted 7 fundraising events.

One prominent New Hampshire kingmaker has already placed his bet on someone else. Tom Rath, the longtime Republican fixer here who served as an adviser to the presidential campaigns of former President George W. Bush and 2012 GOP nominee Mitt Romney, has decided to back Ohio Gov. John Kasich this time around.

"I think there was in Kasich an optimism and a record of accomplishment both in Washington at the state level that was unmatched and there was a currency to him that others don't have in terms of dealing with issues," Rath told CBS News.

Unaffiliated Republicans say Bush is an obvious target for his rivals, given his significant bank account and perceived status as the favorite of the Republican establishment.

"All campaigns go through ebbs and flows here, and because he is considered a leading candidate, everyone is after him all the time," said Steve Duprey, a former John McCain adviser and Republican National Committeeman from the state. "If they can knock off Jeb here, every other candidate sees an easier path to winning, so everyone is gunning for Jeb."

While weak poll numbers cast a cloud over his campaign, there is one silver lining: Bush is still the leading candidate among New Hampshire voters on the question of having the right experience to be president.

"There is a lot of volatility in the race right now," Tim Miller, Bush's communications director, told CBS News. "Support on the ballot is really soft, so we are focused on the ground game and building the fundamentals."

Longtime observers of New Hampshire politics say it's too early to write anybody off - especially four months out from the first-in-the-nation primary.

Andy Smith, polling director at the University of New Hampshire, told CBS News that 2012 exit polls showed that almost 40 percent of voters made up their minds in the final three days of the primary race. And 15-20 percent waited to make up their minds until Election Day.

"Polling at this point tells you something about the state of the race, but it doesn't tell you anything about who people are going to end up supporting," Smith said.

Miller said that only now are voters "just beginning to see advertising and started to get engaged." The Bush campaign started advertising in New Hampshire two weeks ago, but it's planning for over $4 million in TV ads to go up in the state in January and February, closer to primary day.

Rival campaigns and strategists are eager to try to damage Bush before January. Even opponents who are ahead of him are piling on. Donald Trump has savaged him as low-energy and unelectable, thanks to a last name associated with the past.

Bush's last name cuts both ways, though - name I.D. is one of the most prized assets in politics.

"I don't believe in Bush fatigue," said one New Hampshire operative working for a rival campaign. "Name I.D. always helps. There is no way around it. Having a name like Trump or Bush helps."

There are other criticisms, though: that Bush is stiff and sometimes goofy on the campaign trail, and that he is a weak debater.

Bill Greiner, a Bedford businessman supporting Chris Christie, pointed to the most recent GOP debate in California. Trump attacked Bush forcefully and even factually inaccurately -- only to have Bush offer a conciliatory high-five to Trump as the three-hour affair came to an end, Greiner said.

"It was a little surreal," Greiner said. "Here he is getting the tar beat out of him, with Trump picking on his wife saying inappropriate things, and he then high fives him at the end? He was so awkward."

Duprey, who is not supporting a candidate in the race, countered that Bush is working harder than his brother or father ever did in the state. His father won the New Hampshire primary in 1998 and 1992, while his brother lost the 2000 primary to Sen. John McCain.

"People like him when they meet him, and they see he has serious proposals about important issues," Duprey stated. Once people start paying attention, he believes Bush "will be one of the top contenders to win."

But in this crowded field, Bush has competition coming in the form of John Kasich, Rubio and Chris Christie, all of whom speak to the same mainstream GOP voters that Bush is trying to attract. Kasich in particular has climbed in New Hampshire pitching himself as a successful governor with high approval ratings in his own state of Ohio, eating into Bush's support in the process. Rubio, too, is climbing in the polls.

Bush lobbed a subtle critique at Rubio, whom he considers a friend, during an interview with CNN, implying that he'd been a follower in the Florida legislature and not a leader, and perhaps had too much in common with President Obama.

"I relied on people like Marco Rubio and many others to follow my leadership," Bush said of his time as governor.

"We've had a president who came in and said the same kind of thing, new and improved, hope and change," he added. "And he didn't have the leadership skills to fix things. In fact, he's been the greatest most divisive president in modern history. What we need is someone with proven leadership to fix things."

Publicly, Bush's financial backers are projecting confidence. Kent Lucken, for one, said he's read the stories of dissatisfied Bush fundraisers, but he said he hasn't encountered any in his conversations.

"We are five months out. Jeb is in a very good position on many levels and donors like him for all the right reasons. He has an enviable donor list - the envy of the field. The truth of the matter is that every candidate would die to have the list of donors and resources that Jeb has," he said.