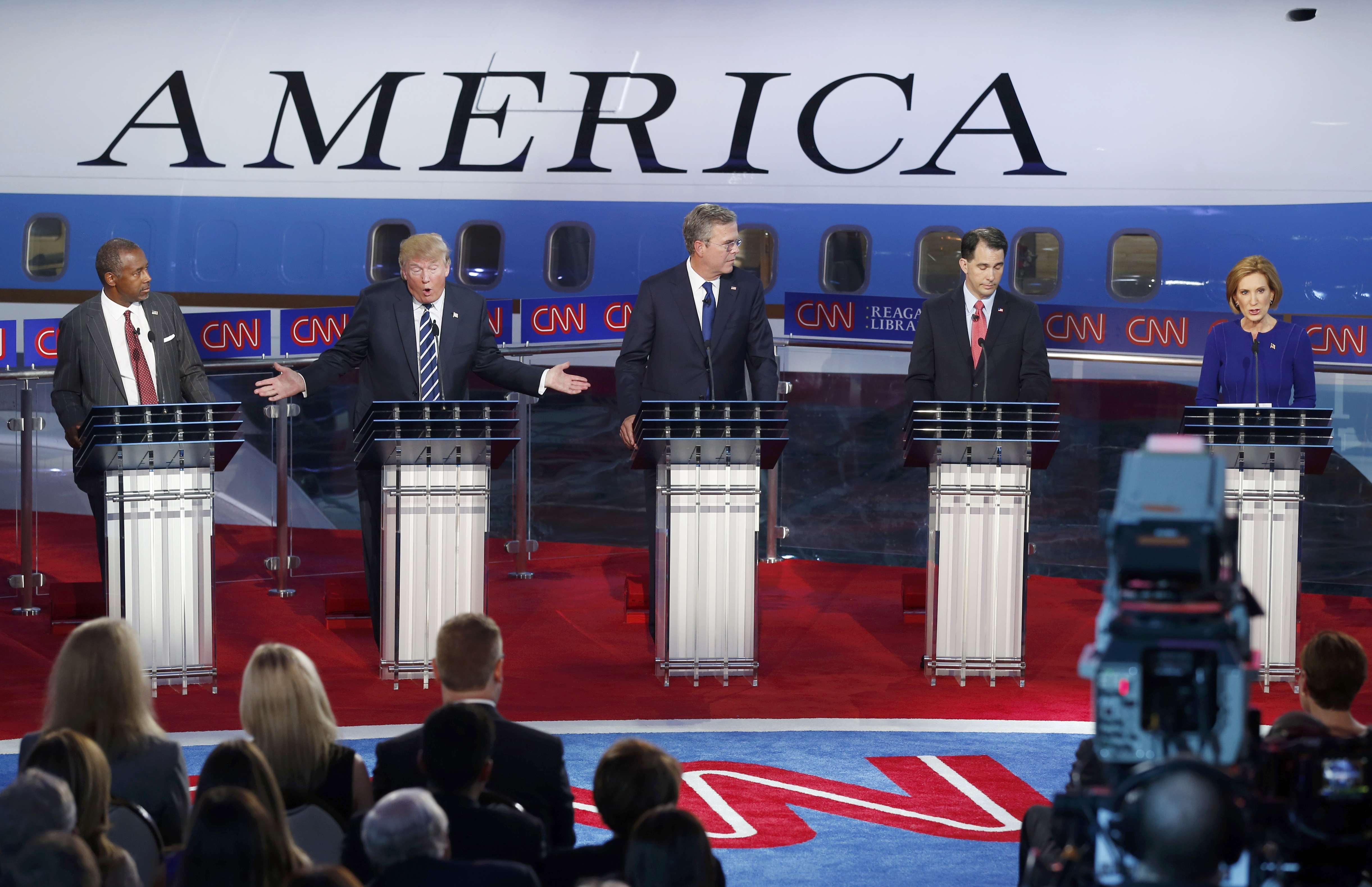 Over three hours on the debate stage Wednesday night, the 11 presidential candidates in Wednesday night's primetime Republican debate bickered with one another and talked over each other. The real standout moments came when the candidates attempted to rise above the fray. In most cases, that meant attempting to show an even temperament in a tiff with frontrunner Donald Trump.

Former Hewlett-Packard CEO Carly Fiorina, for instance, delivered one of the strongest moments of the debate with a restrained, yet succinct response to Trump's apparent criticism of her appearance.

"I think women all over this country heard very clearly what Mr. Trump said," Fiorina said without any further elaboration, eliciting cheers from the audience at the Ronald Reagan Presidential Library in Simi Valley, California.

The businesswoman only earned 4 percent support in this week's CBS News poll of Republican primary voters, but she has been building traction. Out of the five GOP candidates relegated to the "second-tier" debate in August, Fiorina was the only one to move up to Wednesday night's primetime debate, thanks to her growing support.

Fiorina also made impassioned comments in this debate on issues like defunding Planned Parenthood and marijuana legalization. She personalized the drug debate by talking about her daughter's death from drug addiction. "We are misleading young people when we tell them that marijuana is just like having a beer. It's not," she said.

Fiorina went toe-to-toe with Trump on multiple issues, including their respective business records. Slammed for her questionable record at the helm of HP, Fiorina said, "When you challenge the status quo, you make enemies. I made a few. Steve Jobs told me that when he called me the day I was fired to say 'hey, been there, done that - twice.'"

The exchange between Trump and Fiorina gave New Jersey Gov. Chris Christie an opportunity to seemingly take the high road. "You're both successful people, congratulations," he said sarcastically, adding that the average, out-of-work construction worker could "care less" about their success. He told them to "stop this childish back-and-forth."

At the start of the debate, Christie took a similar tack, asking CNN, the debate host, to literally turn the spotlight from him to the audience. "Leadership is not about me, it's about our country," he said. "It's not about us, it's about the people in the audience tonight. [President Obama] has stripped away their trust... their belief their children will have a better life."

Former Florida Gov. Jeb Bush also tried to shame Trump, at one point asking him to apologize to his wife, Columba Bush, for dragging her into the debate over immigration reform. "To subject my wife into the middle of a raucous political conversation was completely inappropriate, and I hope you apologize for that." Trump responded, "I won't do that because I said nothing wrong, but I hear she's a lovely woman."

Bush found himself in more rancorous exchanges with Trump -- over issues like casino gambling in Florida -- as did several other candidates in the debate.

Sen. Rand Paul of Kentucky slammed Trump for "his visceral response to attack people on their appearance." He added, "My goodness, that happened in junior high."

Trump retorted, "I never attacked [Paul] on his look, and believe me, there's plenty of subject matter right there."

Trump also sparred with Wisconsin Gov. Scott Walker, needling him for his declining poll numbers. "You have right now a huge deficit," Trump incorrectly alleged. "When the people of Iowa found that out, I went to Number One, and you went down the tubes."

While Trump inspired plenty of acrimony on the debate stage, all of the debate participants seemed to understand why the real estate mogul is leading in the polls -- voters prefer a political outsider. In this week's CBS poll, 48 percent of Republican primary voters said they prefer a candidate who has experience in business or the private sector.

Just about every candidate tried to cast himself as an outsider. When the 11 candidates had the opportunity to introduce themselves at the start of the debate, there was hardly any mention of any political experience. Sen. Rand Paul, for instance, introduced himself as "an eye surgeon from Bowling Green, Kentucky."

Sens. Marco Rubio and Ted Cruz similarly left out their official titles. And when Trump accused Rubio of having the worst voting record in the Senate, Rubio admitted his attendance was poor, but he excused his frequent absence by blaming Congress for being a place where nothing gets done. "I've figured out very quickly that the political establishment in Washington, D.C. in both political parties is completely out of touch with the lives of our people.

Later in the debate Christie declared, "I am a Republican in New Jersey -- I wake up every morning as an outsider."