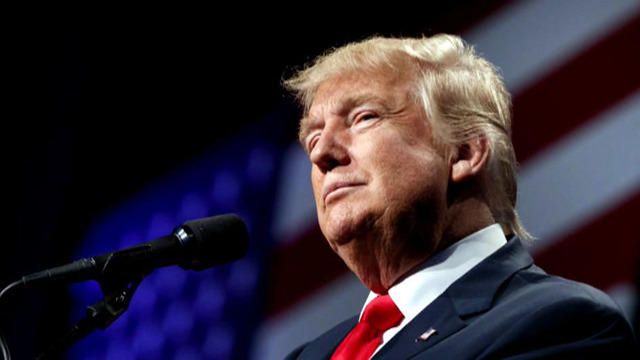 GETTYSBURG, Pa. -- Donald Trump is pushing ahead with a to-do list for the first 100 days of a Trump administration even as his path to the White House narrows.

Beset by weeks of controversy, the Republican presidential nominee tried to shift attention back to his core priorities with an address Saturday in Gettysburg, Pennsylvania. Aides said it would offer a first glimpse at the closing argument Trump will make in the next two weeks before the Nov. 8 vote, but before Trump could get to the policy portion of his speech, he drew outsized attention instead to how he would deal with his sexual assault accusers -- at least 10 women who have come forward with allegations of sexual misconduct against Trump.

“Every woman lied when they came forward to hurt my campaign,” Trump said in Gettysburg, reading from a teleprompter. “Total fabrication. The events never happened. Never. All of these liars will be sued after the election is over.”

“But a simple phone call placed to the biggest newspapers or television networks gets them wall-to-wall coverage with virtually no fact-checking whatsoever,” he added.

Trump spoke briefly about various policy issues as well, including how he would regulate and break up corporate mega mergers, tying his trust-busting agenda to what he claimed was the outsized power of the “crooked” mainstream media.

“As an example of the power structure I’m fighting, AT&T is buying Time Warner and thus CNN, a deal we will not approve in my administration because it’s too much concentration of power in the hands of too few,” he said.

“Likewise, Amazon, which through its ownership controls the Washington Post, should be paying massive taxes but it’s not paying,” Trump continued.

The GOP nominee was wrong, however, about the Washington Post’s ownership: Amazon does not own the D.C.-based paper. Jeff Bezos, who is the CEO of Amazon, personally owns the Post.

“Additionally,” Trump said, “Comcast purchase of NBC concentrates far too much power in one massive entity that is trying to tell the voters what to think and what to do. Deals like this destroy democracy and we’ll look at breaking that deal up and other deals like that. This should never ever have been approved in the first place. They’re trying to poison the mind of the American voter.”

In policies unrelated to his personal feuds with sexual assault accusers, Trump also called for slight reforms in immigration policies and the federal workforce.

The GOP nominee, who has touted a new “Drain the Swamp!” phrase to allude to the corruption in Washington, D.C., also proposed a hiring freeze on all federal employees.

Trump wants to use the freeze to “reduce federal workforce through attrition, exempting military, public safety and public health.”

Trump’s team has heavily hyped the speech as his campaign struggles to regain ground lost to Democrat Hillary Clinton.

Stephen Miller, Trump’s national policy director, said the speech was meant to “set the tone” for the campaign’s final days and that Trump would try to make the case as “the change-agent our country needs.”

The GOP nominee also emphasized his differences with Clinton and accused her of being rudderless and under the control of corporate interests. It’s an argument Republicans have tried to reinforce by pointing to stolen emails from her campaign chairman that cast light on the Clinton Foundation’s reliance on wealthy foreign governments.

Clinton was getting a campaign boost on Saturday from singer Katy Perry, who planned to push early voting during an event in Las Vegas. The pop icon has been a vocal Clinton backer and was the featured entertainment at the Democratic National Convention.

Clinton’s campaign headquarters in New York was back up and running after an envelope containing a white powdery substance arrived on Friday. Police said initial tests showed the substance wasn’t harmful, and Clinton spokesman Glen Caplin said four people who received a full medical examination reported no health issues and were released.

With the debates now behind them, Trump and Clinton have few natural opportunities to significantly alter the course the race, especially with early voting already underway in 34 states. Yet neither candidate wants to overlook any opportunity to secure a few more votes. Though he acknowledged the possibility he may lose, Trump said Friday he would keep up an aggressive schedule in the final days so that he could end the race with no regrets.

“I will be happy with myself,” Trump said.

More than 4.4 million votes have already been cast. Data compiled by The Associated Press showed that Clinton appeared to be displaying strength in crucial North Carolina and Florida, and may be building an early vote advantage in Arizona and Colorado.

Trump appeared to be holding ground in Ohio, Iowa and Georgia, although those states would not be sufficient for him to win the presidency if he trails Clinton in Florida or North Carolina.

The symbolism of delivering his message in Gettysburg was not lost on Trump’s aides, who said they chose the location because of its historical significance as the site of the battle that is seen as the turning point in the Civil War. It was also meant as a nod to President Abraham Lincoln’s abolition of slavery and his efforts to expand the Republican Party tent.

Trump has often pointed to Lincoln as he’s tried, with little luck, to expand his appeal with African-American voters and other minority groups. To Trump’s dismay, many of those groups have written off his efforts as condescending and cynical, and he trails Clinton by wide margins among minority voters.

Pennsylvania has been a hotbed of campaigning by both candidates in the final days of the race. Trump was spending his second consecutive day in the state, while Clinton had two events of her own in Pittsburgh and Philadelphia. The AP analysis of the most competitive states rates Pennsylvania as leaning Democratic in the presidential race.