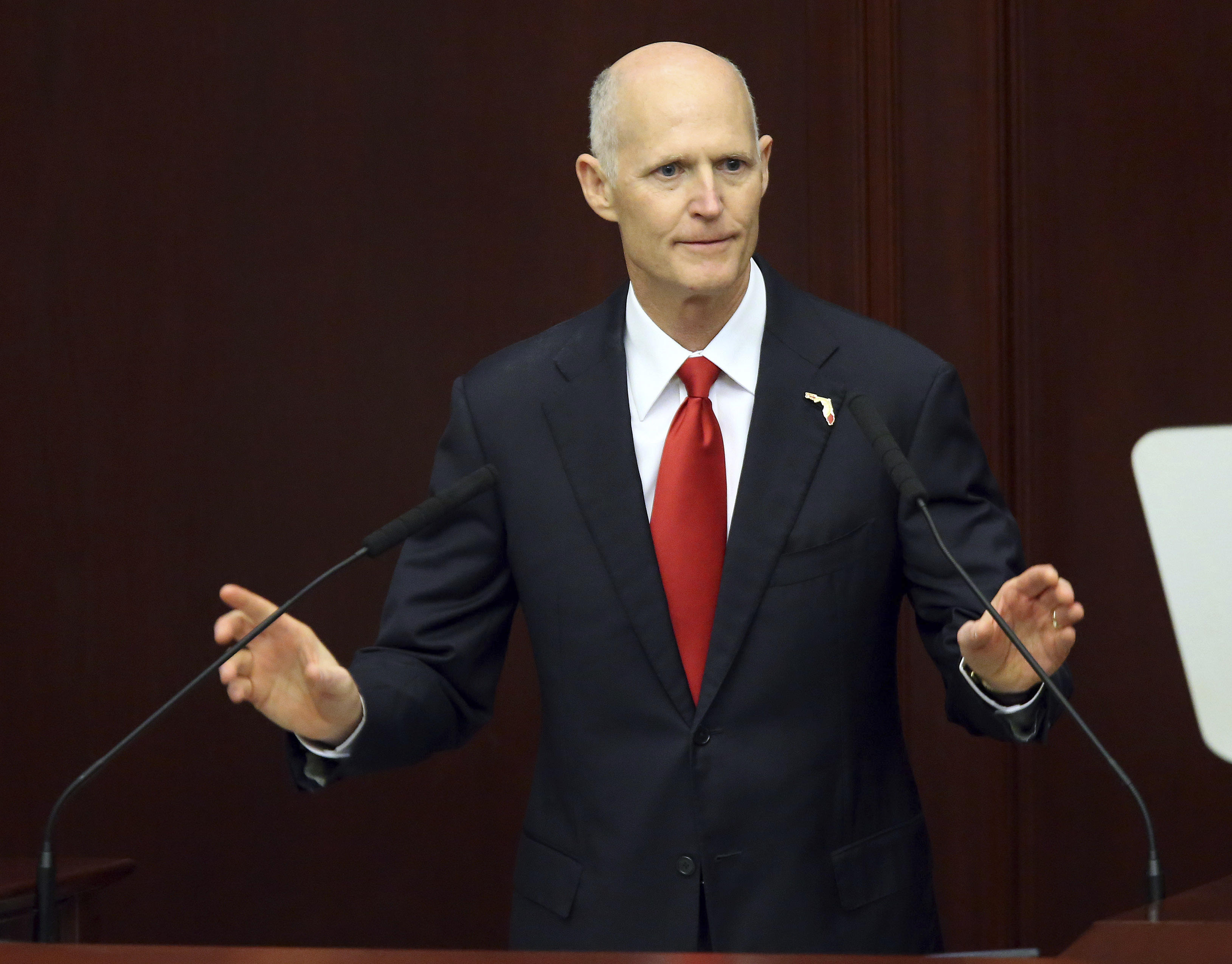 Even as primary season continues, several Senate races are taking shape, with some incumbent Republicans and several incumbent Democrats in danger of losing their seats. The "blue wave" may be coming for the House of Representatives, but it is less likely to crash over the Senate, where Democrats are likely to lose seats and widen the gap between the majority and the minority. Here is an updated look at Senate races to watch as November approaches.

The race to replace departing Sen. Jeff Flake will put the theory that demographic changes are turning Arizona blue to the test.

Phoenix-area Rep. Kyrsten Sinema, the likely Democratic nominee, has tried to carve a niche as a more moderate Democrat. According to FiveThirtyEight, Sinema votes in line with President Trump's policies around 60 percent of the time. She is also a member of Democrats' Blue Dog Coalition, a group of more moderate congressional Democrats. However, local Democrats see Sinema as the party's best chance of taking a still-red state.

Three Republicans are vying to become the Republican candidate for Senate: Rep. Martha McSally, the choice of the party establishment, conservative firebrand Dr. Kelli Ward, and former Maricopa County Sheriff Joe Arpaio. Arpaio, who recently received a presidential pardon, will likely leech votes away from Ward, a former state senator who ran in the Republican primary against Sen. John McCain in 2016.

Sinema would likely prefer to face a more extreme figure like Ward or Arpaio. However, McSally is the front-runner to win the nomination, making it less likely that moderates will flock to Sinema.

Arizona's primary election is on August 28.

Republican Gov. Rick Scott, who is prevented from seeking a third term due to term limits, is challenging Democratic Sen. Bill Nelson in one of the country's most contentious races. State and national Democrats are concerned about the prospects of victory for Nelson, who has been in office since 2001.

Scott raised $22 million in his first quarter as a candidate for Senate, with $8 million of those funds coming from individual contributions, while Nelson raised $4.4 million in the second quarter. Scott is also extremely wealthy, and could potentially pour millions of his own funds into his campaign in the final stretch of the race.

Polling has shown the race to be close, with Scott leading Nelson by 3 percentage points in a CBS News poll from July. Florida is one of the states where a loss would be devastating for Democrats, as it would widen the narrow gap between the current majority and minority in the Senate.

Sen. Joe Donnelly is perhaps the most vulnerable Democrat in the Senate this election season. Donnelly is running for re-election in a state Mr. Trump won by nearly 20 percentage points. The Democrat has been nervously hewing to the center in recent months, denouncing recent progressive battle cries like implementing Medicare for All and abolishing U.S. Immigration and Customs Enforcement.

Donnelly is facing a challenge from Mike Braun, a Republican business executive who sailed to his primary victory as an outsider candidate and spent $4.5 million in the final weeks of the race.

Mr. Trump campaigned against Donnelly during a May rally in Elkhart, Indiana, calling the incumbent "Sleepin' Joe." Meanwhile, Donnelly continues to steadfastly project an image as a moderate, and even Trump-friendly. In July, Donnelly released an ad that quotes Mr. Trump's praise of the senator at a bill signing later in May.

In an age of hyper-partisanship, it's unclear whether Donnelly's tactics will be successful, or whether ruby-red Indiana will elect a Republican senator in November.

Sen. Claire McCaskill is yet another endangered Democrat seeking re-election in a state Mr. Trump won by an overwhelming margin. McCaskill has lucked out in her Republican opponents in previous years; in 2012, the candidacy of Republican Todd Akin was tanked by his comment that "legitimate rape" could not result in pregnancy.

McCaskill received another political godsend in 2018 thanks to the meltdown of the state Republican Party. GOP Gov. Eric Greitens, a conservative rising star, resigned earlier this year amid after being accused of blackmailing and assaulting a woman with whom he had had an affair.

McCaskill's Republican opponent, state Attorney General Josh Hawley, has been criticized by some in his own party for being too distant, and not campaigning with sufficient vigor. McCaskill has also outraised Hawley, raking in over $4 million in donations during the second quarter, compared to Hawley's $1 million. Early polling has generally shown McCaskill ahead, although a poll from the Republican firm Remington Research in July showed Hawley edging out McCaskill by two percentage points. McCaskill has also recently been knocked by Hawley for using a private plane during a campaign tour.

The November election will test McCaskill's luck, and her campaigning skills.

Sen. Dean Heller is widely considered the most vulnerable senator in the majority and is the only Republican senator seeking re-election in a state that Hillary Clinton won in 2016. Although he avoided a potentially tricky primary with Mr. Trump's help, his close ties with the president and his agenda could be fatal to his campaign. In 2017, Heller co-sponsored a bill to repeal and replace the Affordable Care Act, which would have reportedly cost Nevada $250 million in federal health care funding. Heller said in August that Republicans made a "big mistake" by tackling Obamacare as their first major legislative move with Trump in office.

The incumbent is facing Democratic Rep. Jacky Rosen, who was first elected in 2016 in a district that Mr. Trump won. However, Rosen lacks name recognition across the state. Early polling shows a tight race, with different polls showing either candidate ahead by one percentage point or less.

Democratic Sen. Heidi Heitkamp is a major target for national Republicans, although she has a relatively close relationship with Mr. Trump for a Democrat. Heitkamp was considered for a cabinet position, and has sat next to the president at bill-signings and ridden on Air Force One. Mr. Trump once called her a "good woman." Heitkamp released an ad touting her bipartisanship, noting that she voted over half the time in line with Mr. Trump's policies.

Mr. Trump's chumminess with Heitkamp has evoked the annoyance of her Republican opponent, Rep. Kevin Cramer, who has suggested that Mr. Trump was not targeting Heitkamp forcefully because of her gender. However, in a June rally, Mr. Trump went after Heitkamp, saying that she was liberal who voted in line with Senate Minority Leader Chuck Schumer and House Minority Leader Nancy Pelosi.

Even with Trump's hot-and-cold behavior, Heitkamp is seriously vulnerable.

Blackburn is focusing her campaign on her support for Trump, who endorsed her in May. At a rally in Nashville in May, Mr. Trump portrayed Bredesen as a tool of "Chuck and Nancy." Blackburn has promised to wholeheartedly support Mr. Trump's agenda if elected. Blackburn used clips from that rally in a recent campaign ad touting Trump's endorsement.

Despite Blackburn's Trumpworld cred, the race remains competitive. Bredesen's campaign recently released an ad highlighting praise that he received from Republicans when he was governor. Blackburn is trying to make the election a referendum on Trump, a strategy which may not work in her favor.

Smart money in Texas is not betting that Rep. Beto O'Rourke, the telegenic Democratic congressman from El Paso, will defeat Sen. Ted Cruz. However, despite Mr. Trump's nearly 10-point margin of victory in 2016 and Cruz winning by 16 percentage points in 2012, the buzz around O'Rourke is loud enough to suggest that the conservative incumbent may be in trouble.

O'Rourke's tour of the state has garnered large crowds nearly everywhere he goes. He has also raised $10 million in the second quarter, compared to Cruz's $4 million. The Cook Political Report has even rated the Texas Senate race as "lean Republican," which means they don't believe it is a lock for Cruz.

Nonetheless, O'Rourke is a long shot. No Democrat has been elected statewide in Texas in 20 years. As in Arizona, O'Rourke's candidacy is a test of how much demographic changes have shifted a solid Republican state to the left, and whether it's enough to elect a Democrat.

Sen. Joe Manchin is an endangered species: the last statewide Democrat standing in West Virginia, which voted for Mr. Trump by over 40 percentage points. If anywhere can truly be defined as "Trump country," it is West Virginia, where formerly Democratic Gov. Jim Justice switched to the Republican Party in 2017 at a rally Mr. Trump.

Manchin has made his reputation as a conservative Democrat, voting to confirm Justice Neil Gorsuch to the Supreme Court in 2017 and Gina Haspel as director of the Central Intelligence Agency in 2018. He is a major target of Republican efforts to get vulnerable Democrats to vote for Supreme Court nominee Brett Kavanaugh. Manchin hasn't ruled out voting for Mr. Trump in 2020.

His willingness to embrace Mr. Trump may be enough to save Manchin, who is facing Republican state Attorney General Patrick Morrisey in the general election. Recent polling has shown Manchin to be several points ahead of Morrisey. However, if Republicans - with the help of Trump - are successfully able to portray Manchin as just another Democrat, that lead could narrow very quickly.

It's unlikely that Democratic Sen. Bob Menendez is going to lose his re-election effort in New Jersey in November, but it is not outside the realm of possibility. After a hung jury was unable to come to a verdict on federal corruption-related charges, the government dropped the case against Menendez, but the specter of his alleged misdeeds overshadows his campaign.

Menendez won his primary with only 62 percent of the vote against a primary candidate who barely campaigned. Menendez will probably prevail against Republican Bob Hugin, but the margin of victory may be smaller than expected, depending on how many people cast a protest vote. Hugin has also injected over $15 million in his own campaign.

Democratic Sen. Doug Jones' victory Alabama proved that the Deep South is indeed vulnerable to a blue wave. Sen. Cindy Hyde-Smith was appointed to replace Sen. Thad Cochran in April, and is now trying to win a December special election. She facing a challenge from the right from conservative state Sen. Chris McDaniel. Democrat Mike Espy, a former congressman and secretary of agriculture under President Bill Clinton, is also in the race.

California's Senate seat will definitely remain in Democratic hands. Incumbent Sen. Dianne Feinstein overwhelmingly won her primary against state Sen. Kevin De Leon, who challenged Feinstein from the left. However, Feinstein and De Leon are both on the November ballot, due to California's practice of advancing the top two vote-getters in a primary, regardless of party.

Despite decisively losing the primary, De Leon was endorsed by state Democratic Party, and some progressives in the state hope that he can ride an insurgent campaign to victory over the 85-year-old incumbent.