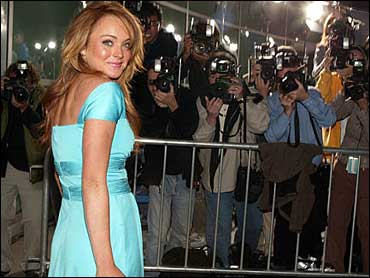 The comedy starring Lindsay Lohan as a student who gets swept up in the backstabbing politics of fashion, love and popularity among high school cliques earned $25 million, according to studio estimates Sunday.

Although it starred 17-year-old Lohan, the presence of "Saturday Night Live" star Tina Fey, who also wrote the screenplay, appealed to grown-up moviegoers. Overall, "Mean Girls" got its strength from girl power.

"The teenage-girl audience has a lot of clout and a lot of discretionary income from somewhere. They've got a lot of fun money and go to see movies in groups," said Paul Dergarabedian, president of box-office tracker Exhibitor Relations.

Two of last week's top movies continued to perform strongly. The Denzel Washington thriller "Man on Fire" fell to No. 2 in its second week with $15.2 million, and "13 Going on 30," which starred "Alias" TV actress Jennifer Garner as a child in an adult body, ranked third with $10 million.

"We've got a new breed of female stars," according to Dergarabedian, who said the success of "13 Going on 30" and "Mean Girls" establishes Garner and Lohan as major audience draws. "These movies work because they don't talk down to teen girls," he said.

Three new films debuted with modest results. "Laws of Attraction," a romantic comedy with Pierce Brosnan and Julianne Moore as feuding lawyers who fall in love, earned $7 million to come in fourth.

"Godsend," a horror-thriller starring Robert De Niro as a scientist who clones a dead boy, collected $6.9 million, while "Envy," with Ben Stiller as a suburbanite who covets the success of neighbor Jack Black, had $6.1 million. Both films overcame critical pummelings to rank fifth and sixth, respectively.

After the runaway success of "The Passion of the Christ," actor Jim Caviezel followed up his role as Jesus playing a real-life 1930's golfer in "Bobby Jones: Stroke of Genius." That film failed to rank in the top 10 in its debut, earning $1.3 million.

The overall box office returns were $90.5 million, down about 36 percent compared to the same weekend last year. But this weekend's films were smaller in scale compared to last year, when "X-2: X-Men United" was the top movie with $85.5 million.