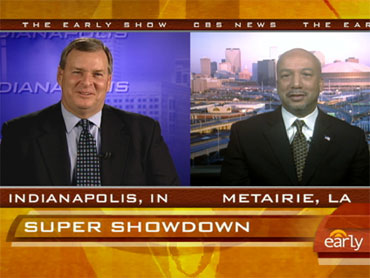 Best known for his role in "The Passion of the Christ," Jim Caviezel has returned to the big screen in the new movie, "Bobby Jones, Stroke of Genius."

In it, he plays the legendary golf icon, Robert Tyre Jones, Jr., who was torn between his family and the game he loved. Jones still remains the only golfer in history to win the prestigious Grand Slam -- all in the same year.

Caviezel discussed his new movie on The Early Show.

As a 14-year-old, Jones overcame a sickly early childhood to becoming a sports phenomenon. He often endured pain and grueling physical strain to achieve victory on the golf course. Of the 13 titles that he collected during his short career, four of them -- the U.S. Amateur, U.S. Open, the British Amateur and the coveted British Open -- were won within four months of the same year. The next year he retired from competitive golf at the age of 28.

Jones was more than a golf player. The family man played golf only in the summer and, by the time he was 24, he had earned a degree in mechanical engineering from Georgia Tech, one in the classics from Harvard and passed the bar after attending classes for a year at Emory. And he spoke six languages.

Some Facts About Jim Caviezel