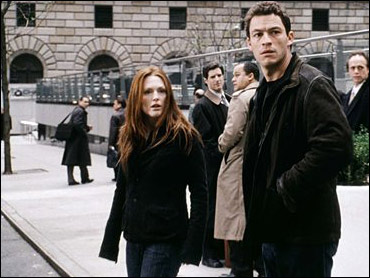 Actress Julianne Moore, who has turned a few heads on the big screen, believes Americans put far too much emphasis on youth and beauty.

Moore tells Early Show co-anchor Harry Smith she was told early in her career that she was not good-looking enough to become an actress.

"That was stuff I dealt with early in my career, and you become more successful, and people say, 'She's really pretty,'" she says. "You realize your looks haven't changed; it's the way people are perceiving you. Beauty is an interesting, subjective kind of thing, and we place much too much importance on it."

Moore says she will never get plastic surgery. She sees it as an epidemic that is making people look the same. "I feel like it doesn't make people look any younger. It makes them look like they've had surgery," she says. "It's an aesthetic that's not human, so I want people to look like themselves."

Moore stars in the new psychological thriller "The Forgotten," playing a mother trying to deal with the death of her son, without the support of anyone, including her husband, played by Anthony Edwards.

Moore's character is tormented by the memory of her 8-year-old son Sam's death in a plane crash 14 months before. She is informed by her psychiatrist that she is suffering from delusions and her son never existed. She tries to find evidence of Sam's existence, but it has all disappeared.

Lobster Recipe From The Iron Chef

Wrestler explains why he wouldn't take on a girl

Moore, a mother herself, says, "The loss of a child is simply unfathomable, a tremendous tragedy, and it affects you so deeply and you can barely comprehend it, so it's an interesting premise for a movie, that it starts with something that emotionally is so fraught, so important."

Some Facts About Julianne Moore