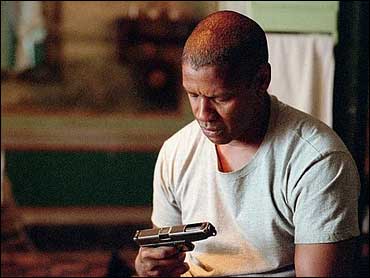 In it, he plays an ex-CIA operative who can't help but open his heart when he becomes a bodyguard to a 9-year-old girl, who is played by Dakota Fanning, in Mexico City where there is an epidemic of kidnappings.

Washington dropped by The Early Show to discuss his new role as a man seeking revenge when the young girl is kidnapped.

Pita and Creasy slowly develop a friendship. But, when Pita is forcibly taken away, Creasy vows to kill anyone involved in or profiting from the kidnapping.

"He has…one hand on the Bible, one on the bottle, very depressed, at the end of his rope," Washington tells The Early Show co-anchor Rene Syler. "She's this little angel who just brings him back to life and gives him a reason for living, literally."

MTV Gears Up For 'Two-A-Days'

In some senses, he takes on the role of a surrogate parent for her. So his world falls apart when the person he has been hired to protect is abducted.

"He becomes a 'man on fire.' He wreaks havoc," Washington explains.

Kidnapping is a widespread problem in Latin American countries. In its original version, in book form, "Man on Fire" was written about 30 years ago, when the kidnapping problem was more prevalent in Italy.

"Man on Fire" was shot in Mexico. Syler asked Washington what kind of issues that presented.

"A lot of security. A lot of fajitas, too," Washington quipped. "It was cool. At first, it was a little bit strange. You know, you go into a foreign country. You get to the airport and…I had six or seven people, two or three cars, following me everywhere. But you start to settle down, and I started sneaking out.

"You know, one of these guys could trip and fall and kill me. Too many guns... We went to a very popular restaurant… You come out of the restaurant, and there's like 45 bodyguards. Everybody in the restaurant has their own bodyguard, own armored vehicle. Heck of a way to live."

Syler wanted to know what it is about Washington that keeps him grounded.

"Well, you know, I've been at it for a while," he said. "I know where my ability comes from, and I don't take myself too seriously. And I have four kids. That will keep you grounded… They could care less. The last place they want to come is on the set, because it's boring. They sit around and do what? Watch me act?"

Don't they know their dad is one of the sexiest men alive?

Some Facts About Denzel Washington