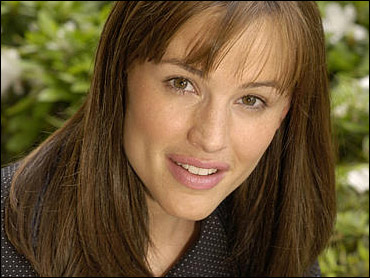 Between takes on the super-serious ABC thriller, Garner says she can't stop giggling, can't stop dancing around. She and her co-stars made a pact this season not to lose their composure, because when everyone is cracking up the days run long and longer.

"I'm definitely a clown. I make faces a lot, I dance for them a lot, I sing to them. I try to make sure they're entertained," she told The Associated Press.

Her new comedy "13 Going on 30," in which she plays a little girl in a grown-up's body, was a chance to turn her standard screen frown upside down.

It's certainly a change from "Alias" and last year's "Daredevil," playing tough, beautiful young women armed with angry eyes and a boot to the face for bad guys.

"It was weird to watch this movie and see myself smile so much," she said. "It felt so personal to see my smile on-screen. I felt like I preserved my smile for my personal life, because I smile all the time."

While considering whether to take the part, Garner got this advice from an "Alias" camera operator: "He said, `When the camera rolls you're 30, and when it cuts you're 13, so you might as well flip it and make some money off of your own personality,"' Garner said.

The 32-year-old actress plays Jenna Rink, a young girl who wishes on her 13th birthday party in 1987 to be "thirty, and flirty and thriving" — a headline from her favorite fashion magazine, Poise. When she opens her eyes, she's living in New York, with a hockey-star boyfriend and serving as editor of the same magazine.

But, she finds, her grown-up life is a mess of shallow selfishness, and she tries to reconnect with the geeky little boy she mistreated years ago, played as an adult by Mark Ruffalo.

As an adult with the mind of a teen, Garner plays her a little too loud sometimes, a little anxious and excitable and blissfully unaware of her own kidlike behavior (such as wrapping a Fruit Roll-Up around her index finger and gnawing it off during an editorial meeting) while trying hard to seem as mature as possible.

"She's living a fantasy," Garner said. "When I was 13 I wasn't particularly girlie, so it was fun to live it through Jenna's eyes. Even the clothes the hair and makeup and shoes and bags. They were all what a 13-year-old's fantasy would be, the ideal of how you would dress when you are 30, this kind of ... larger-than-life, expressionistic clothing."

In the movie's most memorable scene, she saves a prestigious party from being a flop by shamelessly performing all the moves from Michael Jackson's "Thriller" video.

"It was the same kind of adrenaline and the same kind of joy I get from shooting a fight scene. It's just in this one, I was allowed to smile," she said. "I didn't have to grunt and scowl."

Apart from her own memories of awkward childhood, Garner said most of her preparation involved hanging out with a 13-year-old friend named Madeline Sprung-Keyser, the daughter of producer Christopher Keyser, who gave Garner her first notable TV roles on the short-lived shows "Time of Your Life" and "Significant Others."

Her muse even turned up in a sleep-over scene in the movie — which replicated some of the "research" Garner did to prepare during a sleep-over at the producer's house.

"We had pizza and gross food and we played with the Ouija board and called boys," Garner said. "But I fell asleep first."

The key to playing a little kid, she said, is capturing their intense desire to be taken seriously.

"Hanging out with 13-year-olds reminded me that there were times when I would be standing in a store with money I had earned baby sitting and the salesperson would walk by and talk to an adult. It's as though you're invisible in the world. You're just discounted. And 13-year-olds are actually pretty capable and sophisticated. They just can flip and then be children and adolescent and dramatic."

The past few years have been busy for the actress, who in her private life split with husband Scott Foley (they met while working on the TV show "Felicity") and now dates her "Alias" co-star Michael Vartan.

As she wraps up the third season of the spy series, Garner is preparing to dish out more pain over the summer as the resurrected warrior woman in the comic book adaptation "Elektra," a spin-off of her character from "Daredevil."

"She's darker now. She's an assassin for hire. She pretty much died and came back to life, and had a near-death experience that makes her more ruthless than she already was."

In person, the hard-bodied actress — perfectly muscle-toned from so much exercise and stunt work — said she's looking forward to kicking more butt.

"I love fighting," she said. "It is grueling, but that doesn't bother me. It's such an honest kind of tired. I love the discipline of it. It makes me laugh.

"The other day we shot a big fight on `Alias.' It was all we did all day. It was one of the biggest fight scenes ever done. Very rarely can we devote a whole day to a fight. The more the day went on and the more tired we were all getting, the happier I got."

Whether the movie roles keep coming, she said she's happy to stay on TV: different costumes each week, different adventures ...

"I'm still totally happy," she said. "Two weeks ago I was riding a horse in the desert as fast as I could, as fast as the horse could go and I've never galloped on a horse before. And next week, I'm being tossed out of a helicopter 200 feet in the air and rappelling down. That's so fun!"