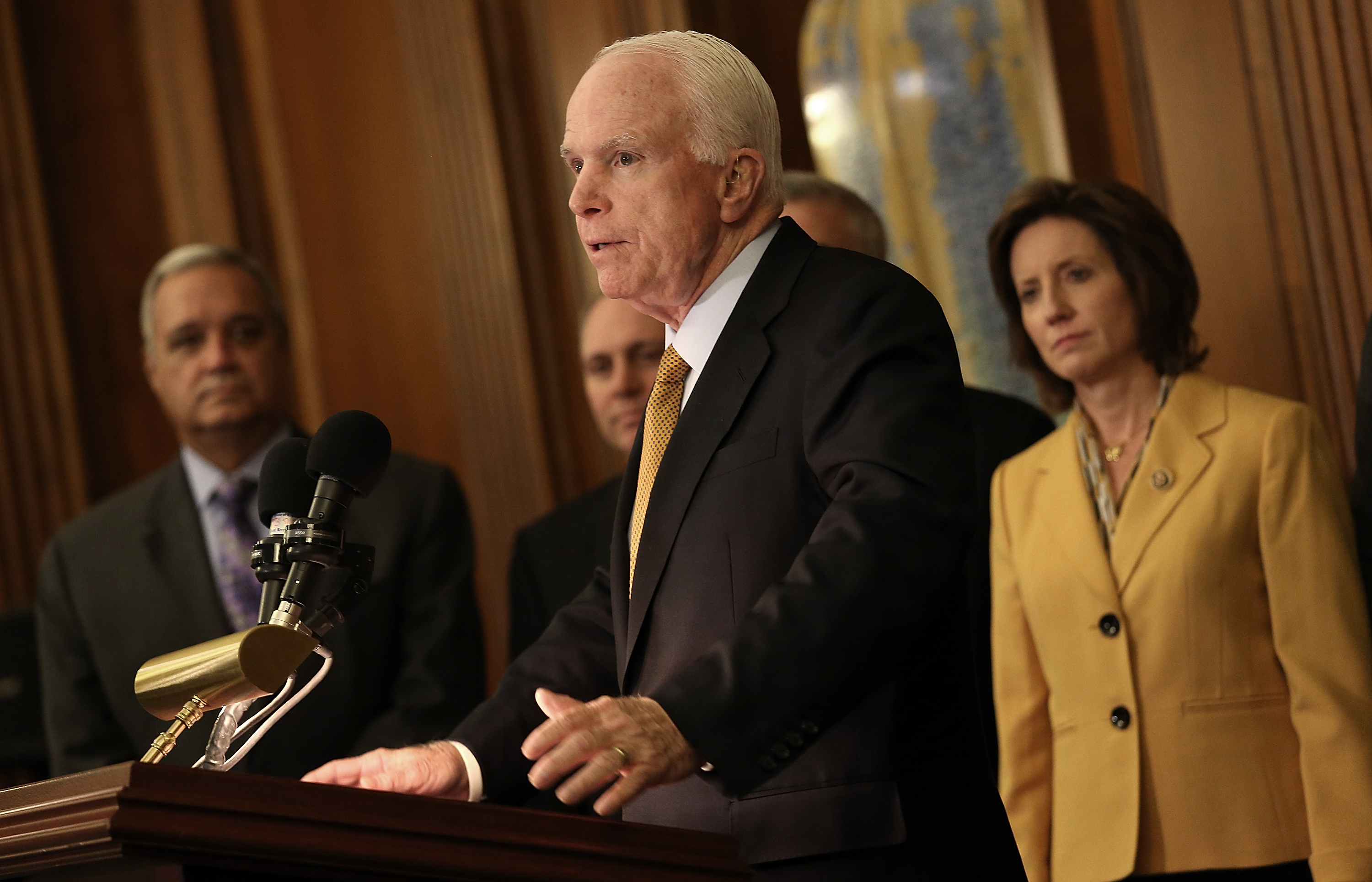 John McCain has served five terms in the U.S. Senate, been elected his party's 2008 presidential nominee and is arguably one of the most prominent lawmakers in the Republican party.

But in his own words, he's facing the "race of his life" this year to get reelected--and in large part, that is because of Donald Trump.

In the wake of Trump's rise as the presumed Republican standard-bearer this fall, there's been a lot of discussion about the ways in which Trump at the top of the ticket could further endanger Senate Republicans who were already in for tough reelection battles, as well as making competitive races that otherwise should have been fairly certain Republican victories.

Nowhere is that second dynamic more true than in Arizona, a red state--increasingly purple--with a growing Latino population that has perennially put the state on Democrats' electoral wish list in recent years. Four years ago, now-Sen. Jeff Flake defeated Democrat Richard Carmona in that year's Senate race by just 4 points; Arizona operatives in both parties suggest this year could be even closer.

Democrats argue that a potential Trump-caused uptick in Latino turnout across the state, coupled with the party getting its top recruit in the race with Rep. Ann Kirkpatrick, could be just what's necessary to give a Democrat a shot at winning statewide and defeating the long-serving GOP incumbent.

McCain does have advantages many other GOP Senate incumbents don't have: he's represented the state for almost 30 years in the Senate, and has both the long-standing relationship with voters and the extensive political network that come along with that kind of electoral longevity. His campaign released a memo in mid-May noting that he has three field offices across the state and his campaign has already made 550,000 voter contacts; in terms of fundraising, he has $5.5 million on hand and had five Senate colleagues come to Arizona to raise cash with him earlier this month.

Publicly, McCain has said he's running his own race and that Trump at the top of the ticket will have little effect on his own reelection bid. But at a private fundraiser earlier this year, he acknowledged the difficulties Trump could cause him back at home in November.

"If Donald Trump is at the top of the ticket, here in Arizona, with over 30 percent of the vote being the Hispanic vote, no doubt that this may be the race of my life," McCain said at the event, according to audio obtained by Politico. "If you listen or watch Hispanic media in the state and in the country, you will see that it is all anti-Trump. The Hispanic community is roused and angry in a way that I've never seen in 30 years."

But Republicans in the state say McCain has a strong relationship with the Hispanic community, and that the race could inspire some of them to split their ticket.

"Is he in the race of his life? Maybe, maybe not," said Sean Noble, an Arizona Republican strategist. "...I think the Trump voter might be slightly different than a McCain voter--you're going to have a number of Hispanics who vote against Trump but for McCain."

There's been little polling in the race, but what numbers do exist from this year tend to put Kirkpatrick within striking distance of McCain: a Public Policy Polling survey taken after Trump became the presumptive nominee, for example, found McCain leading Kirkpatrick by 6 points. Another poll, from April, had them tied.

For his part, McCain hasn't found himself performing quite the same kind of rhetorical gymnastics other GOP Senate incumbents have. Take New Hampshire Sen. Kelly Ayotte, for example -- she's insisting she will "support" the nominee but not "endorse." McCain has been pretty clear that Trump's stances on immigration and national security in particular are unacceptable, and he's said as much: in March, he said they are "uninformed and indeed dangerous."

And when Trump insulted McCain's time as a prisoner of war in Vietnam last summer, opining, "I like people who weren't captured," McCain responded that he himself didn't need an apology, but that Trump should "owe an apology to the families of those who have sacrificed in conflict and those who have undergone the prison experience in serving our country."

McCain said this week that he's "campaigning [on] my own in Arizona," and his campaign says he is running his own race and letting Trump run his. Asked by the Washington Post whether he would campaign with Trump in Arizona, McCain replied: "I've said enough about Mr. Trump."

"He's sort of in a damned if you do, damned if you don't situation," Barr continued. "There is genuine real affection for McCain in the state among some people--there is also very deep loathing of McCain, particularly in his own base. So he needs both groups--Trump is like the gateway to both."

Steve Voeller, a longtime strategist and adviser to Arizona Sen. Jeff Flake, suggested that McCain will be able to walk that line by making it clear that while he is willing to work with Trump, he's also promising not to hold back if and when Trump deserves censure for his positions.

"When he can influence Trump, he will, and I think he'll welcome the opportunity," Voeller said. "But McCain's going to run his own race--that has to kind of be the guiding principle. If there's times when he has to distance himself from [Trump], he'll do that too."

Still, Democrats are already seizing every opportunity they can to tie McCain to Trump, as they're doing with Republican incumbents across the country. Though Kirkpatrick's campaign has not yet gone up on TV, Democrats released a digital ad switching back and forth between clips of Trump saying inflammatory things--including his comments about McCain's war service--with footage of McCain saying repeatedly that he will support the GOP nominee no matter who it is.

"No matter what Donald Trump says, John McCain would support him for president," the ad says. "There was a time when country mattered more than his political party, but 30 years in Washington have changed John McCain. We need leaders to stand up to Donald Trump."

A Spanish-language radio ad this month, from People for the American Way, hit both McCain and Flake over their refusal to take action on President Obama's nominee to the Supreme Court, Merrick Garland. "Is it because they want to see Donald Trump--the man who called Mexican immigrants rapists and drug dealers--get to name our next Supreme Court justice?" the ad asks.

Whether that argument will stick with a quantity as known as McCain remains to be seen. Part of the benefit of being well-known as a straight-talking "maverick" is that, unlike in other states, Arizona voters may look at Trump and McCain and opt to separate the two.

"[Trump] has been so vitriolic about Hispanic people, about the issue of immigration, there's really no room for misunderstanding his stance on this issue," said Catherine Alonzo, a Democratic consultant in the state. Still, she added: "One of the things we've learned from Trump thus far is that we haven't ever, as an industry, been very good at predicting his impact. Who knows?"