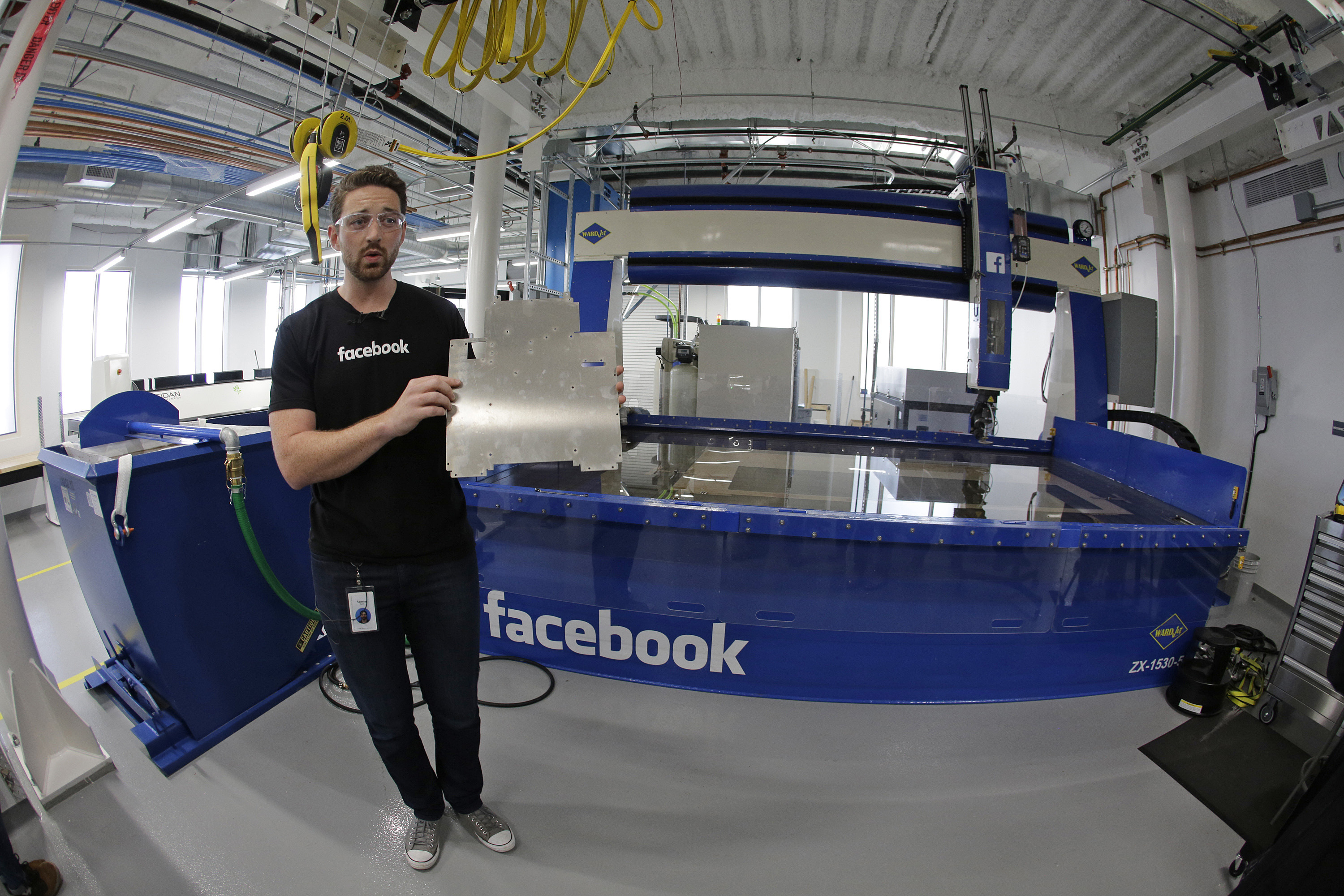 MENLO PARK, Calif. -- Facebook built its fortune on the internet, that non-physical space where people share updates and digital videos with friends. But deep inside its Silicon Valley headquarters, engineers have stocked a new lab with computerized lathes, industrial mills and tools for making physical goods.

It's not a factory for mass-producing smartphones or other consumer products. Rather, it's where engineers will be working on some of the high-tech gadgetry needed for the company's long-term plans to connect people through smart devices, virtual-reality headsets and high-flying drones that deliver internet signals via laser to remote parts of the world.

"When you think about connecting the world, you have to build different types of hardware to help people connect," said Jay Parikh, Facebook's head of engineering and infrastructure.

To get virtual reality right, he added, Facebook needs to refine hardware such as lenses and processors.

The lab will be a space for engineers to design energy-efficient servers for Facebook data centers, test new laser mounts and drone propellers and perfect a prototype 360-degree video camera that Facebook unveiled at a conference in April.

Facebook announced the lab's opening Wednesday and invited journalists for a tour. It's been dubbed Area 404, an inside joke that plays off the "error 404" message internet users see when they try to visit a web page that can't be found. Facebook says its engineers had long talked about wanting such a workspace, but it couldn't be found because it didn't exist until now.

The company won't say how much it spent on the lab, but it took months to build the facility, which is about a third the size of a football field, inside a refitted office building on its main campus.

The lab has long workbenches for electrical engineers to spread out their gear and a room full of the lathes and milling machines, each the size of a small truck. It also has a water-powered cutting machine that can slice sheet metal several inches thick, an electron microscope and a CT scanner to examine how materials react to heat, electrical surges or other stress.

Facebook became a Silicon Valley powerhouse and Wall Street darling because its vast online network is a mecca for digital advertisers. The company sold more than $6 billion worth of ads in the April-June quarter, reaping more than $2 billion in profit.

That offers plenty of leeway to invest in new ventures. Facebook says it spent $4.8 billion on research and development in 2015, nearly doubling its budget from the previous year.

Two years ago, the company spent $2 billion to buy Oculus VR, a startup that makes high-end gear for virtual reality. Facebook CEO Mark Zuckerberg has predicted that virtual reality will be a leading platform for communication, entertainment, education and business in the future. In recent speeches, he outlined a 10-year vision for Facebook that includes services based on virtual reality, artificial intelligence and internet access for the world's most under-developed regions.

The Oculus operation has its own lab in Seattle, while Facebook's drone team is based in Somerset, England. They aren't relocating, but Parikh said engineers from both groups will also use the new facility.

Zuckerberg has hinted at other aspirations, too. This spring, he announced the formation of a mysterious research-and-development group known as "Building 8." It's led by prominent engineer Regina Dugan, a former director of the Pentagon's Defense Advanced Research Projects Agency, or DARPA, the agency that created the internet in the late 1960s.

Before joining Facebook, Dugan ran a Google team that specialized in "rapid innovation" of new tech gadgets. Her projects included a location-tracking smartphone camera for creating 3-D virtual worlds, a technology that Lenovo will include in the Phab2 Pro out this month.

Dugan's group will use the Area 404 lab, but Facebook wouldn't talk about specific projects she will undertake.

Analysts say it's too early to know if these ideas are "vanity projects" or if they will boost Facebook's bottom line. But rivals including Google, Amazon and Microsoft have similar ambitions, some involving drones, tablets or other hardware. Facebook says it spent $4.8 billion on research and development in 2015, nearly doubling its budget from the previous year.

Aside from Oculus, most of Facebook's hardware isn't aimed at the consumer market. Several years ago, the tech industry was abuzz with rumors that Zuckerberg wanted to build a Facebook smartphone. That never happened, although Facebook created special software for an HTC phone that didn't sell well.

Instead, Facebook has led an industry effort to develop more energy-efficient computer centers by sharing server designs with other companies. Similarly, Facebook says it developed the 360-degree video camera to show other inventors what's possible in new camera designs. Those designs could, in turn, produce more video content for the social network to share.

Facebook executives say their solar-powered drones are also meant as prototypes, in the hope that telecommunications companies will use their designs. While Zuckerberg says internet access can spur economic development in poor nations, Facebook also stands to benefit if more people get online.