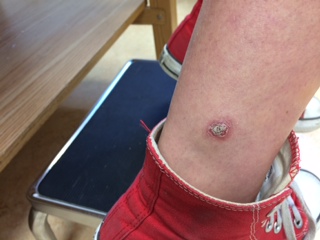 Social media came to the rescue for a dozen teens with an odd-looking skin condition that had stumped some physicians and parents.

It began with a 16-year-old girl who'd spent four weeks on a youth trip in Israel during the summer of 2014, one of her doctors wrote in the journal Pediatric Dermatology. When she came back to the U.S., she noticed a few red lesions on her ankle and thigh that, after a few weeks, became raised, ulcerated and crusty.

A skin biopsy led to an evaluation by a lab at the U.S. Centers for Disease Control and Prevention that revealed a diagnosis: a parasite-related condition called cutaneous leishmaniasis, which is caused by sand flea or sand fly bites.

After her diagnosis, the patient turned to Facebook to spread the word to her friends from the trip, posting a photo of herself with a custom T-shirt design that featured her diagnosis.

"One of her fellow trip participants simultaneously posted a picture of similar skin lesions on the summer trip's group Facebook page," wrote lead author Dr. Kanokporn Mongkolrattanothai, a pediatric infectious disease specialist at Children's Hospital Los Angeles and an associate professor at the Keck School of Medicine at the University of Southern California.

The Facebook posts ignited discussion that helped 12 others in the group identify the same problem, which led the students' parents seek the appropriate medical care.

Mongkolrattanothai told CBS News that leishmaniasis is not common in the United States -- it's typically found in returning travelers from tropical areas where it's endemic -- so diagnosis can lag, taking as long as several months.

"Delay in seeking medical attention usually occurs as lesions go unnoticed or are perceived as ordinary insect bites or stings. In our report, because of the social media, the average time to diagnosis was only 12 days," she said.

Twelve patients were treated with topical medicine and one went without treatment.

"It's a lovely example of a really smart teenager helping her friends. She facilitated and allowed a group of her peers to have more insight and information and seek care that was appropriate," Dr. Wendy Sue Swanson told CBS News. Swanson is executive director of digital health at Seattle Children's Hospital and a pediatrician at The Everett Clinic in Mill Creek, Washington.

It's well known among medical experts that the internet is full of inaccurate medical advice. Pediatrician Dr. David Pollack, a senior physician at The Children's Hospital of Philadelphia's Delaware County primary care locations, said his office is inundated weekly with parents worried about some condition they read about online.

"How can we modulate common sense with unwarranted anxiety when postings originate from both reputable as well as biased sources?" Pollack asked.

He expressed concern that social media may spread misinformation or confusion.

"Beyond that small circle of travelers, how many other parents might look at the photos, see something similar on their own son or daughter, and immediately rush to a conclusion that he/she may have the identical problem? Skin photos can be notoriously misleading, unclear, suggestive, but not necessarily definitive, and many skin rashes and lesions may look alike and be very difficult to distinguish," he said.

But this case shows that social media can be used in a positive way, too. The medical community needs to figure out how to better harness the power of patient communication, like these teens did, Swanson said.

"We don't know how to incorporate patient communities into traditional medicine yet, but it's our obligation to do it," Swanson said.

Author Mongkolrattanothai added, "Our study highlights the powerful role of social media as a resource that can be used to improve healthcare by facilitating rapid access and real-time dissemination of healthcare information, as well as serving as a tool for early detection."