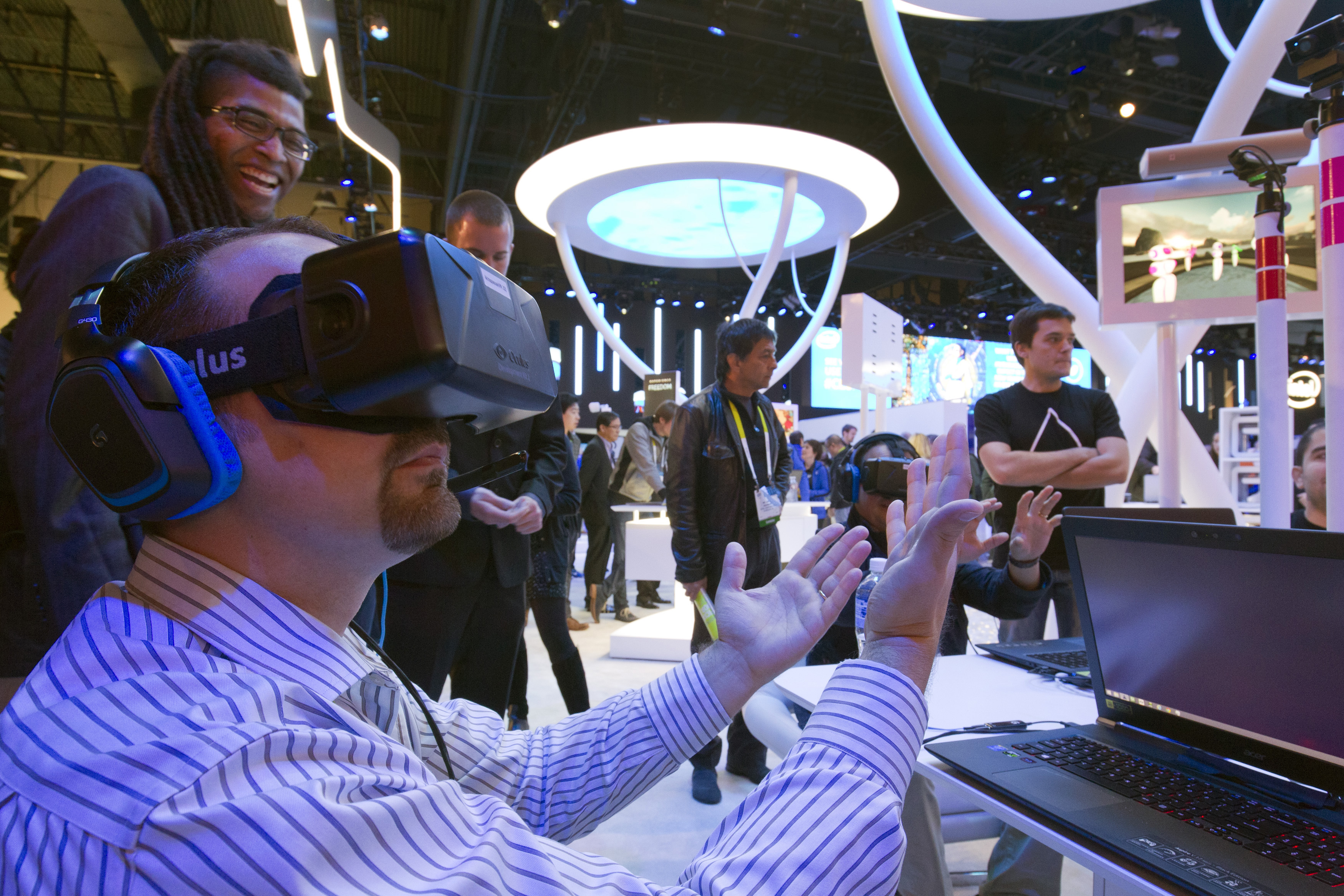 It's finally here -- the Oculus Rift virtual reality system hit the market Monday after months of hype and anticipation. This is the first VR product of its kind to reach consumers. The company that created it, Oculus, was acquired by Facebook for $2 billion in 2014, and now flash forward two years later, its signature headset system is on the market with a $599 price tag.

Oculus Rift charges out of the gate, getting an earlier release than competitors like the HTC Vive, which starts shipping April 5 and the Sony PlayStation VR, due in October. So, now that it's out, what do the critics think? So far, the device -- hailed by Facebook CEO Mark Zuckerberg as the start of a virtual reality-heavy future -- is getting mixed reviews.

CNET Senior Editor Jeff Bakalar views the Oculus as a promising product that could improve over time.

"As of right now, Oculus can only detect head movement. It will get the 3D functionality later this year (with an add-on). For me, the most compelling thing about VR isn't necessarily where it's at right now, but the notion of what is possible in the future five to 10 years down the road," Bakalar told CBS News in an email. "We know the tech's limitations right now -- viewing angle, resolution, bulkiness -- but we see a future where all of those shortcomings are addressed in more comfortable gear, higher-res images, and even the idea that the image could be projected right onto your retina, instead of looking through a lens at a small screen."

From what he's seen, Bakalar thinks the upcoming Vive may offer "the best overall experience," given that it "allows for the detection of movement and body tracking in a 3D space," he said. Of course, that's not a definitive take, given that the Oculus competitor has yet to be released.

Bakalar's take echoes Zuckerberg's comments that this device is just the first wave of virtual reality viewing experiences that will enhance all aspects of entertainment and daily life.

Here's a roundup of some of first reviews:

"May not be as much fun as you think"

CNET Executive Editor Ian Sherr was somewhat underwhelmed by the virtual reality headset. He wrote that while the "future of tech is here," that future "may not be as much fun as you think."

Strap the 1.5-pound headset onto your face and you "can have an out-of-body-like experience that might make you vomit," he wrote. He also found the 13-foot-long cord connecting the device to a PC unwieldy.

That being said, he found the virtual reality experience effective, adding that as soon as the headset is on "it really can make you feel like you're in a different place" transporting you from your living room to beneath a Tyrannosaurus rex or climbing Mt. Everest.

The device is mainly useful for video game play at the moment, with available games like "Eve: Valkyrie" and "Job Simulator: The 2050 Archives" designed to give players an immersive gaming experience.

For their part, Sherr's CNET colleagues Scott Stein and Sean Hollister found the device's actual virtual reality experience to be effective in their joint review.

"This is not like having a tiny TV strapped to my face. Nothing like the Google Glass or Virtual Boy of yore. This feels like I've inserted my head into another world. Admittedly, it's a world where I'm wearing a big, black goggle-cap that keeps me from seeing as clearly as I'd like. At least the straps are fairly comfortable and you only have to adjust them once.The visual artifacts don't always bug me," Hollister wrote. "Like the drops of water on my car's windshield on a rainy day, I usually find myself ignoring the slightly blurry vision and the glowing halos that constantly appear around any bright object in the world. Other times, they're all I can think about."

Hollister sees room for improvement, comparing the Oculus Rift to tests of the HTC Vive, which has motion controllers that give you the chance to "add your hands and feet to virtual reality" and "walk around a room."

While Hollister presented the more concrete review, Stein gives an impressionistic take on what the virtual experience was like.

"My eyes aren't here anymore. They're somewhere else. Once the eyepiece is over my face, I'm gone. Like looking through a window into another world," Stein wrote. "It's a dream I've had since I was a child, that I've read about in science fiction books. To cast myself somewhere else."

"A clunky portal to a promising virtual reality"

The New York Times's Brian X. Chen found the device promising but clunky to work with.

"While the Rift is a well-built hardware system brimming with potential, the first wave of apps and games available for it narrows the device's likely users to hard-core gamers," Chen wrote. "It is also rougher to set up and get accustomed to than products like smartphones and tablets."

Chen wrote that some of the technology needed to operate the Rift might be seen as "anachronistic" by some users. Given that a user needs to operate the headset with a Windows PC, a monitor, and a mouse, he suggested that some users accustomed to tablets and smartphones might scoff at this now-old-fashioned technology.

"In my modest San Francisco apartment, I set up the system in the living room next to my television set. What an eyesore," he wrote.

Chen suggested that a user has to get used to what he deemed an unflattering look.

"The aesthetic of the headgear -- it looks like a pair of black ski goggles with air traffic controller headphones built into the sides -- is not designed to get you a date," he cracked. "And since wearing the Rift makes users less aware of the outside world, videos and photos of them donning the contraption -- and taken without their knowledge -- may end up on Instagram or Facebook."

Self-conscious concerns aside, the tech reviewer is looking forward to what Oculus has in store for the future. The company delayed the release of Touch, its motion-based controllers, until later in 2016.

"When it comes down to it, I don't disagree with Mr. Zuckerberg that this is just the beginning of virtual reality," he wrote. "With about 30 games and a few apps available at Rift's introduction, there isn't much to do with the system yet. Oculus will eventually need a larger, more diverse set of content to transcend its initial audience of gamer geeks."

"The future is finally here, and it's beautiful"

One of the more enthusiastic reviews came from Steven Tweedie of Business Insider, who declared that with the release of the Oculus Rift comes "the next chapter of entertainment and art."

"After using the Rift on and off for the last week, it's clear that this is the virtual reality experience we've been waiting for," Tweedie wrote. "This isn't the low-cost Google Cardboard or even the mid-range Samsung Gear VR headset. Armed with Facebook's war chest of funding and the smartest minds in the VR industry, the Oculus team has crafted the best tool for escapism since the television and internet were born."

Unlike some of his peers, Tweedie did not find the device itself inelegant and clunky.

"The Oculus team has had years to fine-tune the design and ergonomics of the Rift headset itself, and it shows in the overall hardware design and experience of using it. Clad in sleek fabric, the Rift goggles feel lightweight and polished, a huge improvement over the developer kits that it evolved from," he wrote.

One negative is the fact that the device requires so much other tech gear in order to operate. He said that the "beefy computer" needed to power the rift will shoot the overall cost somewhere between "1,400 and $1,500, which is a hefty sum for something that is, so far, mainly meant to be a video game console.

"That price tag is undoubtedly the biggest thing keeping more people from getting the chance to try virtual reality how it's intended to be experienced," he added. "But like the first color televisions, computers, or iPhone, the cost of the headset and necessary computer will only go down over time before converging with mobile around a decade from now. With the Rift's stellar design and top-notch technology hiding beneath the faceplate, Oculus is ensuring that early adopters will be able to show curious newcomers an experience that's uncompromising in its pursuit of virtual reality's holy grail -- 'presence' -- that sliding-scale measurement of how fully fooled your brain is into believing you're somewhere you're not."

Some other points of contention? Tweedie thought that the resolution could be better, and the front-facing camera that was initially tested did not make the final cut -- a feature he was looking forward to.

Peter Rubin of Wired found setting up and using the device a "remarkably glitch-free process."

He found the headset to be heavier than initially rumored, but the "weight is distributed," making it not uncomfortable.

As with other critics, he found the promise of what the Rift could have in store in the future more appealing than the actual product.

"There's a rift (no, seriously) between what the Rift can do and what you can do with the Rift. Oculus has never been quiet about the fact that it's depending on software companies to create the compelling experiences that bring people back to VR again and again. But right now? On the eve of release? Many of the best experiences I've had in the Oculus ecosystem either aren't in the Oculus Store yet, or won't be available until the company's Oculus Touch handheld controllers arrive later this year," he wrote. "That's in stark contrast to the Gear VR, which launched with more 100 games, apps, and experiences. Granted, the technical lift to make something run at 90Hz--twice, for stereo 3D--is much tougher for a PC than it is for a phone, but the difference in launch-day content is noticeable."

He said that consumers will have to determine whether they want to pay the high-end price tag for the device now, look at competitors that are soon on their way, or wait for improvements to this device that will surely come.

"The only thing you need to ask yourself is what your personal tipping point is. Is it the Netflix or Hulu apps that are available on the Gear VR? Not on the Rift yet, sorry. A VR web browser? Not on the Rift yet, sorry. Social networks that let you share virtual sunsets with friends, or psychedelic meditation tools to unlock your third eye? Not on the -- OK, you get it," Rubin wrote. "But here's the thing: They'll all be here. It's just a matter of when you want to come in."