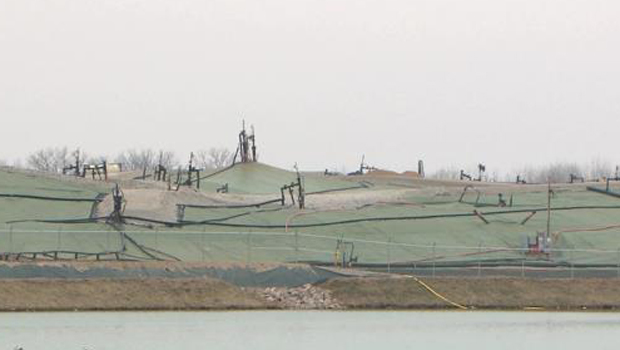 The order by EPA Region 7 Administrator Mark Hague requires companies associated with West Lake Landfill in Bridgeton to come up with a plan within three weeks to remove trees and brush, place non-combustible material on the surface, and take other steps to prevent future fires.

A faulty utility pole was blamed for an Oct. 24 fire that ignited brush on the landfill's grounds. Hague said the EPA found no evidence the fire created any hazard for nearby homes or businesses.

But it was particularly concerning because of existing problems at the landfill. Nuclear waste dating to the Manhattan Project was dumped there in 1973. Meanwhile, an underground fire smolders no more than 1,200 feet away at the adjoining Bridgeton Landfill.

"This EPA order requires swift action by the parties to ensure that the risks of a surface fire, and the effects of any potential surface fire, are greatly reduced," Hague said. "EPA will continue to use its authority at the site to protect surrounding communities from any potential threats posed by the West Lake Landfill."

The EPA order applies to two subsidiaries of Republic Services, which owns both landfills, and Cotter Corp. A contractor working for Cotter Corp. illegally dumped the nuclear material.

Republic Services spokesman Richard Callow said the company "will complete the job in a safe and timely manner."

Ed Smith of the Missouri Coalition for the Environment said the EPA is 20 years late in its new order.

"Common-sense would have been for the EPA to do this in 1995 when a surface fire was reported to them," Smith said.

"I don't know why they ignored it for so long, I really don't," Dawn Chapman, who lives less than two miles away from the landfills, told CBS News correspondent Vinita Nair in October. Chapman helped start a citizen activist group to educate her neighbors.

"I cannot believe that somebody and anybody in their right mind would think that you can leave the world's oldest nuclear weapon's waste sitting on the surface of a landfill for over 40 years and there not be a consequence to that," Chapman said.

CBS News spoke with other residents of St. Louis County who blame the high prevalence of cancer in their neighborhoods on radioactive waste dumped in the area.

West Lake was declared a Superfund site in 1990. In 2008, the EPA announced a remediation plan to cap the nuclear waste with rock, clay and soil. The plan drew enough opposition that the EPA decided to reconsider.

Seven years later, a new plan has not been announced. Last month, four members of Missouri's congressional delegation called for the Army Corps of Engineers to take over, saying they were frustrated with the pace of the EPA effort.

Hague declined comment on the effort to take control of the project from the EPA. He said a final remediation plan is expected to be complete by December 2016.

Republic Services opposes the oversight change, saying it would set back the effort even further.

Republic Services is spending millions on interceptor walls and other safeguards to ensure that the underground smoldering does not reach the nuclear waste. The company insists there is no risk, but environmentalists disagree.

The cause of the underground fire is unknown. It has been burning for years, creating an odor that prompted Missouri Attorney General Chris Koster to sue Republic Services in 2013. The case is scheduled for trial in March.