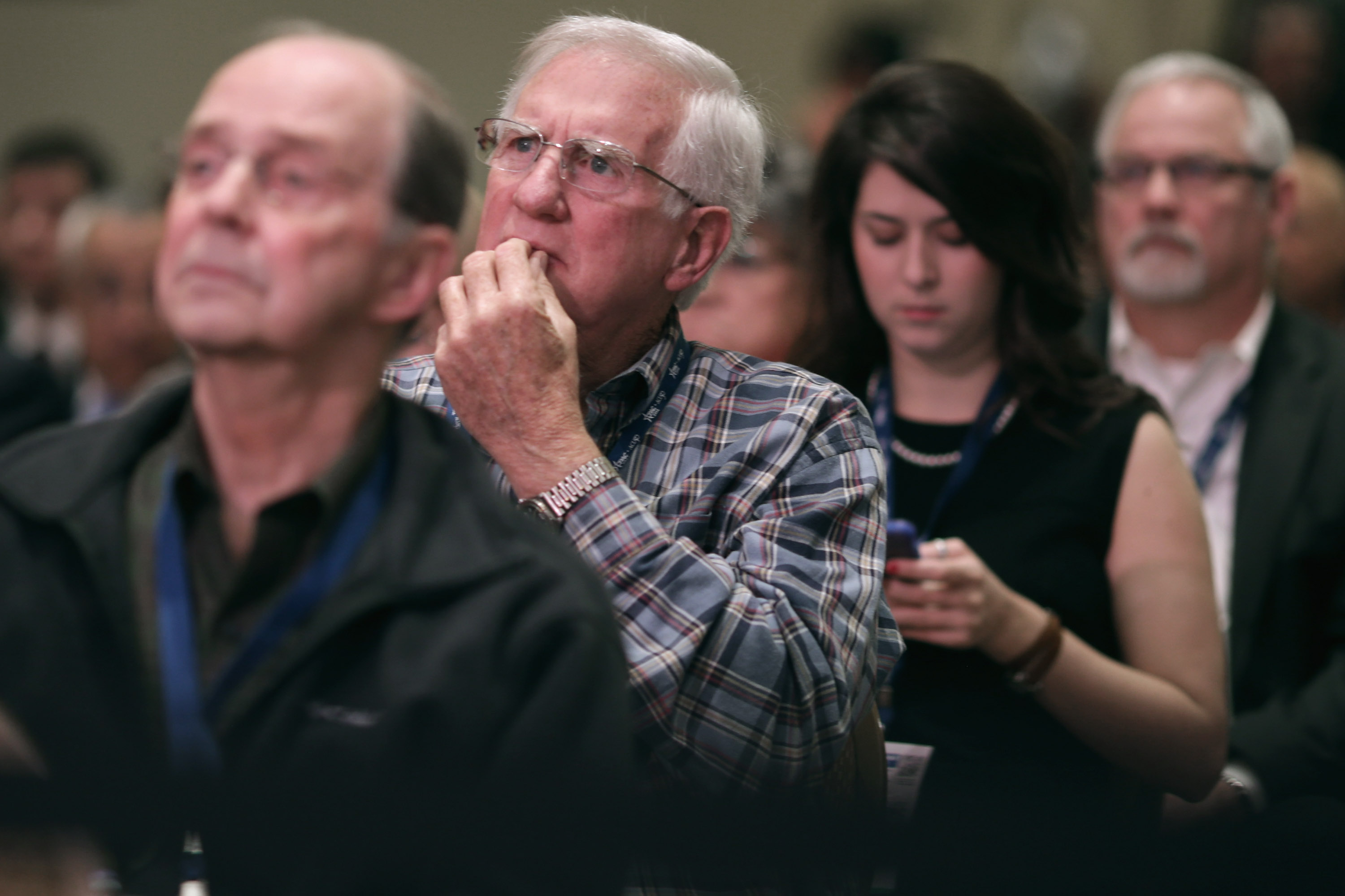 The field of announced Republican candidates has recently doubled to six, with the entry of Ben Carson, Carly Fiorina, and Mike Huckabee. When you add the candidates who are almost certain to soon join the race--Jeb Bush, Gov. Scott Walker, Rick Perry, and Gov. Chris Christie--and the others who might, the field will be big enough to fill an airport shuttle van. The stage at the first Fox News debate in early August will have so many people on it, the organizers may need to put everyone on bleachers.

The Republican presidential pageant is vastly more diverse than the Democratic coronation. The GOP field includes a female CEO, a black surgeon, two Cuban Americans, a lawyer, and a preacher.

This all-but-a-candlestick-maker group is the most robust Republican field in history. But while some Republicans celebrate their diversity and strength, some conservatives see it as a challenge. "If we continue to split the vote, we'll lose to the establishment candidate," says Fran Wendelboe, a former seven-term New Hampshire state representative who now heads an effort to consolidate the conservative vote in the Granite State. Named the 603 Alliance, after the state's area code, the group is committed to picking a Republican candidate who shares its members' views about limited government and who promises to be an executive operating within a strict interpretation of the Constitution. The Alliance hopes to bring candidates together in an October caucus where members will agree to gather behind one horse.

This has been tried before, Wendelboe admits, but "this time the numbers are on our side. We've tried it time and again with the moderate candidate. We've sacrificed our principles and we still haven't won." After going down so many wrong roads, she argues, conservatives will see the wisdom of being tactical and coalescing, not simply following their passion.

That is exactly the message Sen. Ted Cruz has been selling for months, criticizing the soggy-bread candidates of recent nominees like Sen. John McCain and Mitt Romney. But this is the same message many conservatives have delivered before. Illinois Sen. Everett Dirksen stood up at the 1952 convention and said the party was on the way to committing suicide if it nominated a moderate again and not a true conservative like Robert Taft. "We've followed you before and you took us down the road to defeat and don't do this to us," he said, unleashing pandemonium in the hall.

Social conservatives tried this in 2012, when a week before the South Carolina primary, a group of 100 evangelical leaders gathered at a ranch near Houston to put their shoulders behind one candidate to block Mitt Romney's march to the nomination. They backed Rick Santorum, which helped give him an infusion of cash, but ultimately wasn't enough.

The challenge with these efforts is that a lot of voters give more weight to a candidate's electability than to a candidate's ideological compatibility. Ideology can get sticky, too. In New Hampshire, the 603 Alliance isn't taking social issues into account when making its decisions about which candidate to unite behind. But there's a separate effort by social conservatives to find their own one true candidate. In mid-May, National Journal reports, the Council on National Policy will hold meetings to vet candidates. It's not certain that these distinct efforts to pick one candidate will settle on the same one. "Whoever they will pick will be a conservative. Whoever 603 picks, will be a conservative," says Wendelboe. "If their person and our person are in the top three, that is OK. What matters most is that there not be a dozen candidates people will split their votes over."

Bob Vander Plaats, a social conservative leader in Iowa, says the process of uniting is a delicate one. "The people are as excited as I've ever seen them in the conservative base," he said, "so I'd hate to short-circuit the process." Vander Plaats' organization, the Family Leader, will hold a series of events this summer to help its members and other social conservatives "do a thorough job of vetting candidates on their character and competency and the company they keep--who they are putting around them--on cash--do they have the resources to go the distance--and prayer. We pray that God would lead the one that we would be behind."

While the process is playing out, the challenge is keeping the voters and activists from peeling off to support candidates. "Hopefully there are enough of us not committed by Thanksgiving to say we can get behind a candidate," says Vander Plaats. "If I break early for Huckabee and someone breaks for Santorum and Jindal, we're going to fail by division."

In the end, the greatest challenge to all the efforts to unite behind one candidate is that leaders are asking people of passion to act tactically. That's not only hard for them to do as a matter of personal constitution, but it's exactly the kind of behavior that you'd expect from people who value pragmatism over principle. In other words, moderates.