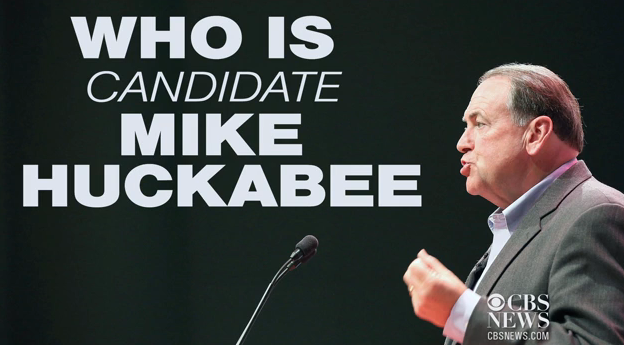 Huckabee kicked off his campaign with a speech in his hometown of Hope, Arkansas. "I always believed that a kid could go from Hope to higher ground," he said. "It seems perfectly fitting that it would be here that I would announce that I am a candidate for president of the united states of America."

Huckabee first ran for president in 2008, beginning the race a virtual unknown and emerging as a real force in the GOP by the end of the primary. He ultimately lost the nomination to Arizona Sen. John McCain, but his sudden rise to prominence served him well after the election, landing him a weekly show on Fox News and a talk radio gig.

Now, though, Huckabee has dropped his day jobs and he's ready to re-enter the political fray. He's pitching himself as an unapologetic social conservative who can also make inroads with blue-collar voters on bread-and-butter economic issues. With no strong ties to the GOP establishment, Huckabee will have to count on a strong showing among grassroots activists if he hopes to become a real player in 2016.

"I'm gonna let you in on a little secret: I never have been, and I'm not gonna be the favorite candidate of those in the Washington-Wall Street Corridor of power," Huckabee said Tuesday. "I will be funded and fueled not by the billionaires, but by working people across America."

"Rest assured: If you want to give a million dollars, please do it," he added.

Though his campaign has just begun, Huckabee is already throwing punches. During his speech on Tuesday, he implicitly criticized Republican candidates who have decided to keep their day jobs during the campaign, like Sens. Marco Rubio, Ted Cruz, and Rand Paul. "If someone is elected to an office, then give the taxpayers what they're paying for and the job that you said you wanted," he said. "If you live off the government payroll and you want to run for an office other than the one you've been elected to, then at least have the integrity and decency to resign the one that you don't want anymore and to pursue the one you've decided you 'd rather have."

Here are five things you need to know about Mike Huckabee:

Huckabee is considered a long shot for the 2016 GOP nomination. But unlike some of the other Republicans facing long odds, Huckabee has run for president before - and he was pretty good at it.

After languishing in the single digits for much of 2007, Huckabee's first bid caught fire at the end of the year, when he rode a wave of Christian conservative support to claim victory in the Iowa caucuses. As the race progressed, Huckabee won seven additional states, most of them in the Deep South.

By the time the primary ended, Huckabee found himself in second-place: According to RealClearPolitics, he won 282 delegates, narrowly outpacing Mitt Romney, who won 272, but still falling far behind McCain, who won 1,563.

That strong showing has given him the kind of bragging rights some other Republican candidates might envy. Huckabee is in the middle of the pack in early 2016 GOP primary polls - a Quinnipiac survey last month pegged his support at 7 percent, for example. But there's evidence to suggest that number has room to grow: In a recent CBS News survey, 42 percent of Republicans said they'd consider supporting Huckabee for the nomination. Only former Florida Gov. Jeb Bush, at 51 percent, enjoyed broader potential support than Huckabee in that poll.

He's a jack of many trades

Huckabee is a politician, but that's only one of the many roles he's played during his 59 years. Before he was elected governor, for example, he was a high-profile Baptist preacher during the 1970s and 1980s- an experience that continues to inform his political outlook.

He's also a successful author and something of a lifestyle guru. Before 2015's "God, Guns, Grits, and Gravy," Huckabee wrote several books, including "Quit Digging Your Grave with a Knife and Fork," a 2005 volume chronicling his drastic weight loss (over 100 pounds) and offering advice on healthy living.

After the 2008 campaign, as noted before, Huckabee embarked on a lucrative career in media, netting a weekly talk show show on Fox News and a daily talk radio show. Both platforms allowed Huckabee to nurture his public profile and keep his name in the minds of conservative voters as he plotted his return to politics.

And not to be forgotten: Huckabee is an avid musician with a taste for blues and classic rock. He plays the bass guitar, a skill he often flaunted on his Fox News show, and he's a member of a band called "Capitol Offense," which he and members of his gubernatorial staff formed in 1996. The band is not just a vanity project: they've opened for artists like Willie Nelson, REO Speedwagon, and the Charlie Daniels Band.

As some Republicans have advised their party to downplay social issues like gay marriage and abortion to appeal to moderate voters, Huckabee has taken the opposite approach, warning Republicans not to take the votes of social conservatives for granted.

He's opposed to abortion in all circumstances, recognizing no exceptions for rape, incest, or maternal health. In a speech last November, he suggested abortion in the U.S. has been a bigger tragedy than the Holocaust.

He's even threatened to leave the GOP altogether if Republicans begin softening their tone on social issues.

"If the Republicans want to lose guys like me - and a whole bunch of still God-fearing Bible-believing people - go ahead and just abdicate on [same-sex marriage], and while you're at it, go ahead and say abortion doesn't matter, either," Huckabee said on the American Family Association's radio show last year. "Because at that point, you lose me. I'm gone. I'll become an independent. I'll start finding people that have guts to stand. I'm tired of this."

He continued in that vein on Tuesday. "We've lost our way morally," he declared in his debut speech. "We've witnessed the slaughter of over 55 million babies in the name of choice and we are now threatening the foundation of religious liberty by criminalizing Christianity and demanding that we abandon biblical principles of natural marriage....Many of our politicians have surrendered to the false god of judicial supremacy."

He's trying to broaden his appeal

Despite a well-earned reputation as a culture warrior, Huckabee insists his appeal spans beyond the religious right.

"The untold secret is that a lot of the support that I had, and I anticipate that I will have, is from the working-class, blue-collar people who grew up a lot like I did - not blue blood, but blue collar," Huckabee told "Face the Nation" in March. "There's a real sense in the Republican Party that there's no one speaking, not only to them, but speaking for them. And if someone can capture both the blue-collar, working-class Republicans, the conservatives, many of them even union members, as well as evangelicals, there's a real pathway to the nomination."

He's made an effort to expand his pitch in recent years, counseling Republicans to speak not just to big business, but to the concerns of American workers and blue-collar voters as well.

It's "as if we're talking to a bunch of people in a corporate boardroom," Huckabee explained on "CBS This Morning" in 2012 after Republicans lost the 2012 election. "We have failed to explain how a good conservative economic policy helps that person live his or her dreams."

That type of populism echoes the case made by Republicans like former Minnesota Gov. Tim Pawlenty and former Pennsylvania Sen. Rick Santorum, who both argued in 2012 that the GOP needs to shed its "country club" image to win a national election. It's also earned Huckabee some foes among the GOP's ardent supply-siders, who see it as a coded admission that a President Huckabee would be an imperfect ally on fiscal issues like taxes, trade, and labor unions.

He's another "man from Hope"

Then-Arkansas Gov. Bill Clinton was famously introduced as the "man from Hope" during the 1992 Democratic convention. It was an allusion to Hope, Arkansas -- the small town where Clinton was born and spent the first few years of his life.

Huckabee, as noted before, hails from Hope as well, and he returned to the town on Tuesday for his big announcement. "Folks, it is a long way from a little brick rent house on second street in Hope, Arkansas to the White House," he said. "But here in this small town called Hope, I was raised to believe that where a person started didn't mean that's where he had to stop."

Huckabee, no fan of Clinton's politics, has made light of his connection to the former president. "I've got a great slogan: give us one more chance" he said of his hometown in 2007 on Bill Maher's show.

In a way, though, it was the original "man from hope" who cleared the way for Huckabee's political rise -- after Clinton won the presidency in 1992, Huckabee won Arkansas' lieutenant governor post in the special election that resulted. When Clinton's successor as governor, Jim Guy Tucker, was indicted on federal fraud charges in 1995, Huckabee was ushered into the governor's post. (The charges against Tucker, for what it's worth, were even related to the same Whitewater land deal that plagued the Clinton White House.)

As Hillary Clinton appears likely to seize the Democratic nomination in 2016, Huckabee has sought to turn his history with the Clintons to his advantage. "Every time I ever ran for public office, I ran against the Clinton political machine," he told a gathering of New Hampshire Republicans last month. "I ran against their money. I ran against them."