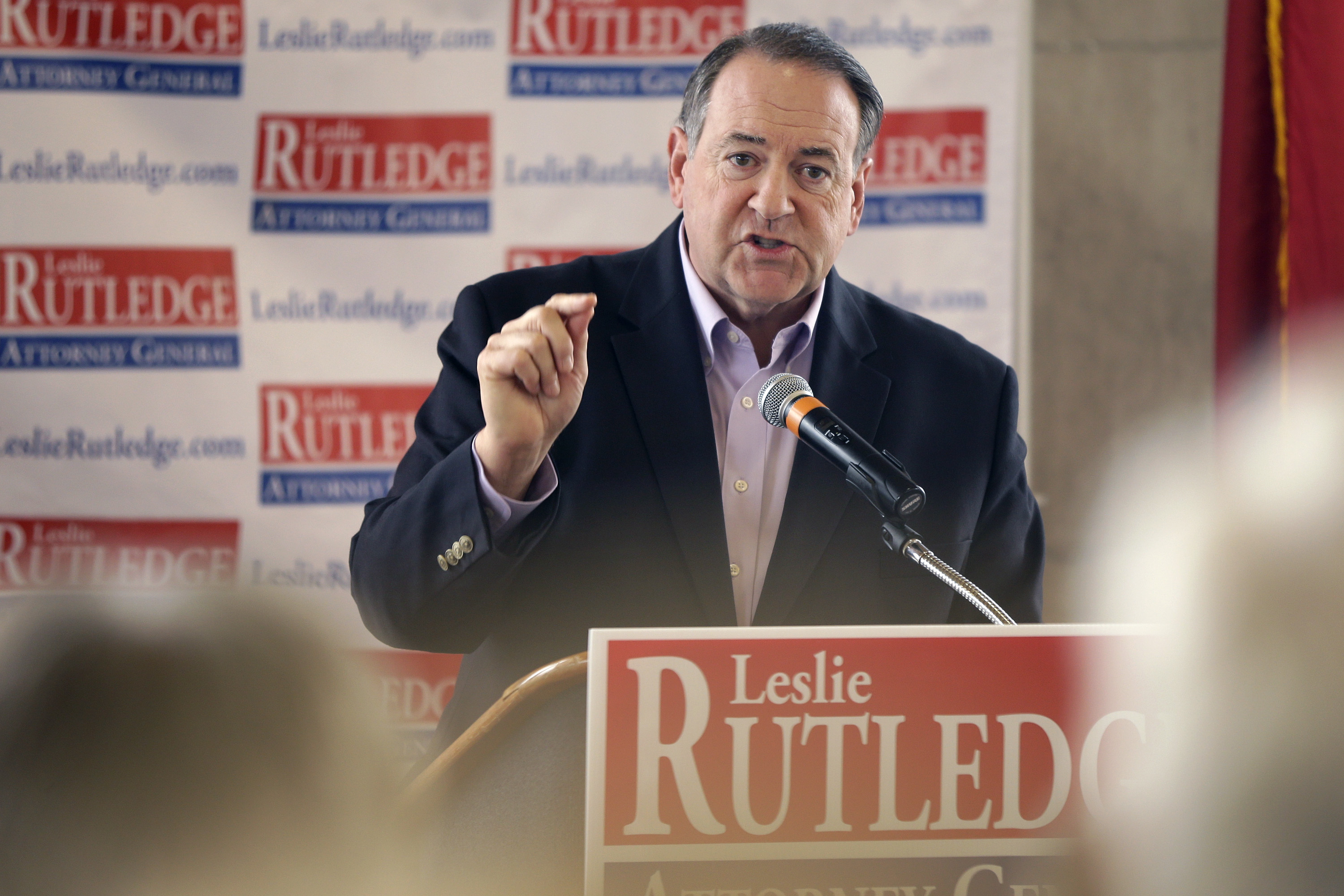 With the first 2016 presidential primary just over a year away, former Arkansas Gov. Mike Huckabee is making all the moves a would-be presidential candidate would make: he's gathering key staff at a non-profit group in advance of a possible run, he's beefing up his foreign policy credentials with a trip to Europe this week, he's written a new, campaign-friendly book extolling America's greatness, and he's scheduled to meet with some of the GOP's top donors across the country later this month.

His advisers are even scouting locations for a potential campaign headquarters in Little Rock, Arkansas, according to the Washington Post.

But Mike Huckabee is more than just a potential candidate--he's also a successful broadcaster with a weekly show on Fox News who will need to avoid sounding too much like a politician unless and until he decides to launch another presidential bid.

Noting his "obligations in broadcasting," Huckabee told the Post, "I have to be very careful, about this...I am not doing anything official at this point."

Huckabee, who was governor of Arkansas between 1996 and 2007, began his presidential campaign as a longshot, but gained momentum in the last couple of months to win the Iowa caucuses in 2008, stunning political observers. His bid eventually flamed out, outpaced by better-funded establishment rivals, but he remains a favorite among the religious conservatives who play an outsized role in the caucuses--the first presidential nominating contest in the country.

That appeal has endured for the better part of a decade, with Huckabee still ranking at or near the top of early polls of the 2016 GOP presidential field. A CNN poll released in September, for example, found Huckabee at the head of the pack in Iowa, nabbing 21 percent support. His closest competitor, Rep. Paul Ryan, R-Wisconsin, earned only 12 percent.

Numbers like that, Huckabee acknowledged, are pretty hard to ignore--especially when reinforced by polls conducted by allies in early primary states showing him in the lead.

"There were polls done that surprised me and got my attention and led my friends to urge me to think of this again," he told the Post.

To that end, Huckabee formed America Takes Action, a nonprofit advocacy group, earlier this year. The group has absorbed several veterans of Huckabee's past runs, including his 2008 campaign manager Chip Saltsman, his daughter and adviser Sarah Huckabee, and communications director Alice Stewart.

Raising money and organizing his staff under a nonprofit rather than a political action committee could allow him to, at least temporarily, continue hosting his show at Fox News, which must necessarily cut ties with any host or contributor who takes a step into elected politics.

But whether Huckabee will be able to keep his day job much longer is an open question, given the glut of near-political activity that he's attached his name to in recent weeks. His book, titled "God, Guns, Grits, and Gravy," is an exploration of "small-town people and families" featuring "Huckabee's brand of optimistic patriotism," according to Amazon. In other words, it sounds to be exactly the kind of inoffensive fare a prospective presidential candidate would write.

Huckabee's trip to Europe, for example, was billed as a "spiritual awakening" and organized by a Christian political strategist named David Lane, according to the Post. But Huckabee will be joined on this "awakening" by a conspicuous number of pastors from early primary states--20 from Iowa, 22 from South Carolina, two from New Hampshire, and eight from Nevada.

If he dispenses with the wink-and-nod approach and decides to take the plunge, Huckabee may find the GOP has changed in the years since 2008. For one, there are a number of candidates vying for the mantle of social conservatism that Huckabee was able to claim for himself exclusively in 2008. Sens. Ted Cruz, R-Texas, and Rand Paul, R-Kentucky, Govs. Rick Perry, R-Texas, and Bobby Jindal, R-Louisiana, and former Sen. Rick Santorum, R-Pennsylvania, who narrowly won the Iowa caucuses in 2012, have all made an effort to court Iowa's influential religious voters in recent months. They're unlikely to allow Huckabee to corner that market this time around.

Bob Vander Plaats, an influential Christian conservative who chaired Huckabee's 2008 effort in Iowa, told the Post he's a fan of Huckabee's, but he can't promise an endorsement.

"Governor Huckabee and I have been friends for a number of years, but he knows that today I have a lot of friends who might run for president," Vander Plaats said.

Huckabee, for his part, isn't sweating the competition--at least not yet.

"That's part of the whole process of having a primary election period," he told the Post. "It provides an opportunity for comparisons."

Senate to vote on final passage of landmark marriage equality bill
Thanks for reading CBS NEWS.
Create your free account or log in
for more features.
View CBS News In
CBS News App Open
Chrome Safari Continue
Be the first to know
Get browser notifications for breaking news, live events, and exclusive reporting.