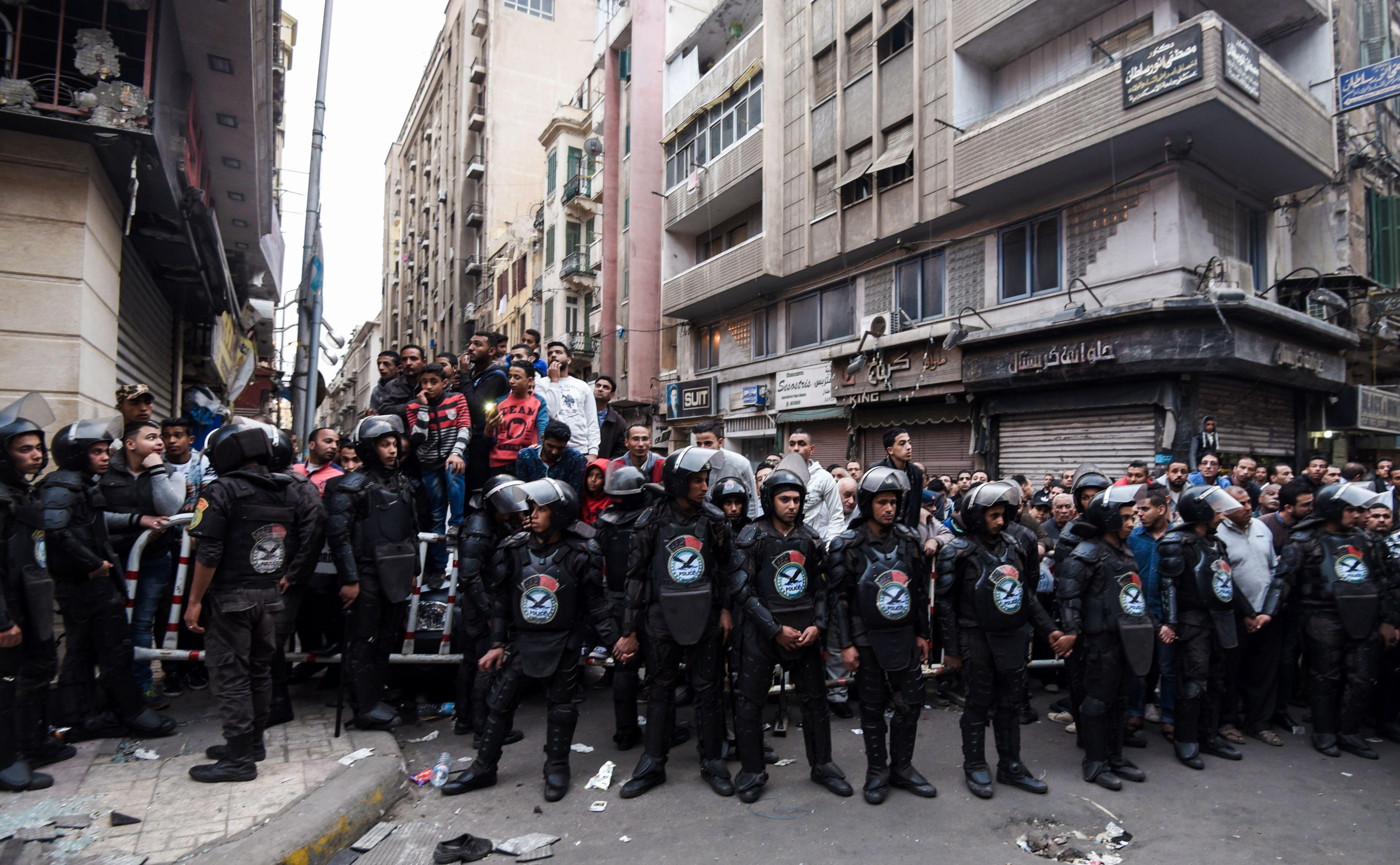 TANTA, Egypt -- Suicide bombers struck hours apart at two Coptic churches in northern Egypt, killing 44 people and turning Palm Sunday services into scenes of horror and outrage at the government that led the president to call for a three-month state of emergency.

The Islamic State of Iraq and Syria (ISIS) claimed responsibility for the violence, adding to fears that extremists are shifting their focus to civilians, especially Egypt’s Christian minority.

The attacks in the northern cities of Tanta and Alexandria that also left 126 people wounded came at the start of Holy Week leading up to Easter, and just weeks before Pope Francis is due to visit.

Pope Tawadros II, the leader of the Coptic church who will meet with Francis on April 28-29, was in the Alexandra cathedral at the time of the bombing but was unhurt, the Interior Ministry said.

It was the single deadliest day for Christians in decades and the worst since a bombing at a Cairo church in December killed 30 people.

While Egypt’s Christians have been frequent targets of jihadi bombers, CBS News correspondent Mark Phillips says this attack seemed also designed to shake the government of strongman President Abdel-Fattah el-Sissi, who has promised security, but has clearly been unable to provide it.

Late Sunday night, el-Sissi called for a three-month state of emergency. According to Egypt’s constitution, parliament must vote in favor of such a declaration -- a virtual certainty since it is packed with supporters of the president. It cannot exceed six months without a referendum to extend it.

President Donald Trump spoke out after the deadly bombings in Egypt on Palm Sunday, tweeting that he had “great confidence” Egyptian President Abdel Fattah el-Sissi would handle the situation “properly.”

The army chief-turned-president also dispatched elite troops across the country to protect key installations and accused unidentified countries of fueling instability, saying that “Egyptians have foiled plots and efforts by countries and fascist, terrorist organizations that tried to control Egypt.”

The attacks highlighted the difficulties facing el-Sissi’s government in protecting Christians, who make up about 10 percent of Egypt’s population.

“Where is the government?” screamed an angry Maged Saleh, who rushed to the church in the Nile Delta city of Tanta where his mother escaped the carnage. “There is no government!”

Video from inside the church broadcast by CBC TV showed people gathered around what appeared to be lifeless, bloody bodies covered with papers. Several doors had been blown off. Women wailed outside.

“After the explosion, everything became dark from the smoke,” said Edmond Edward, attending Mass with his brother, Emil, who suffered head wounds and leaned on him for support at a nearby hospital.

“There was a clear lapse in security, which must be tightened from now on to save lives,” he told The Associated Press. The blast appeared to be centered near the altar, he said.

Susan Mikhail, whose apartment balcony across the street has a clear view of the church and its front yard, said the explosion violently shook her building.

“Deacons were the first to run out of the church. Many of them had blood on their white robes,” she told the AP. The more seriously wounded then were carried out by other survivors and taken to hospitals in private cars, she said.

Hundreds of residents gathered in the area, and church members blocked people from entering the church as police cordoned off the area.

A few hours later, a suicide bomber rushed toward St. Mark’s Cathedral in the coastal city of Alexandria, the historic seat of Christendom in Egypt, killing at least 17 people and wounding 48.

CCTV images showed a man with a blue sweater tied over his shoulders approaching the main gate to St. Mark’s and then being turned away by security and directed toward a metal detector. He passed a female police officer talking to another woman, and entered a metal detector before an explosion engulfed the area.

The Health Ministry said six Muslims were among the dead in Alexandria.

Pope Tawadros II had held Palm Sunday services at the cathedral and the timing of the attack indicated the bomber had sought to assassinate him.

Pope Francis marked Palm Sunday in St. Peter’s Square by expressing “deep condolences to my brother, Pope Tawadros II, the Coptic church and all of the dear Egyptian nation.”

Magdy George Youssef, a deacon at St. George’s, said the church was almost full when the blast occurred and threw him under a pew.

“All I could think of was to find my wife, and all I could see was smoke, blood and completely charred bodies,” the distraught 58-year-old said. Youssef, who suffered only an injured ear, later found his wife at home, with burns to her face.

“What happened is a dangerous indicator that shows how easy it is to attack a large gathering of people in different places,” said researcher Ishaq Ibrahim with the Egyptian Initiative for Personal Rights. “There is a complete government failure in taking the ISIS threat seriously.”

El-Sissi said in a statement that Sunday’s attacks would only strengthen the resolve of Egyptians against “evil forces.” He held an emergency meeting of the National Defense Council, which includes the prime minister, the defense and interior ministers, the speaker of parliament and top army commanders and security chiefs.

Grand Sheikh Ahmed el-Tayeb, head of Egypt’s Al-Azhar -- the leading center of learning in Sunni Islam -- also condemned the attacks, calling them a “despicable terrorist bombing that targeted the lives of innocents.”

Both Israel and the Islamic Hamas movement ruling neighboring Gaza condemned the bombings as well.

An ISIS affiliate claimed the December bombing as well as a string of killings in the northern Sinai that forced hundreds of Christians to flee to safer areas. The militants recently vowed to step up attacks against Christians, whom they regard as infidels.

Egypt has struggled to combat a wave of Islamic militancy since the 2013 military overthrow of an elected Islamist president.

The Sinai-based ISIS affiliate has mainly attacked police and soldiers, but has also claimed bombings including the downing of a Russian passenger jetliner in the Sinai in 2015, which killed all 224 people aboard and devastated Egypt’s tourism industry.

Egypt’s Copts are one of the oldest Christian communities in the Middle East and have long complained of discrimination and that the government does not do enough to protect them. Security at churches is routinely increased around religious holidays.

The Copts largely supported the military overthrow of Islamist President Mohammed Morsi, and incurred the wrath of many of his followers, who attacked churches and other Christian institutions.

While the Copts have stood steadfast alongside the government, an increase in attacks on Christians has tested that support.

Egyptian media had previously reported that the church in Tanta had been targeted before, with a bomb defused there in late March.

As night fell, hundreds of Christians, mostly clad in black, streamed to the church to offer their condolences. Scuffles broke out between the mourners and church volunteers guarding the church’s doors as many pushed and shoved to get in.