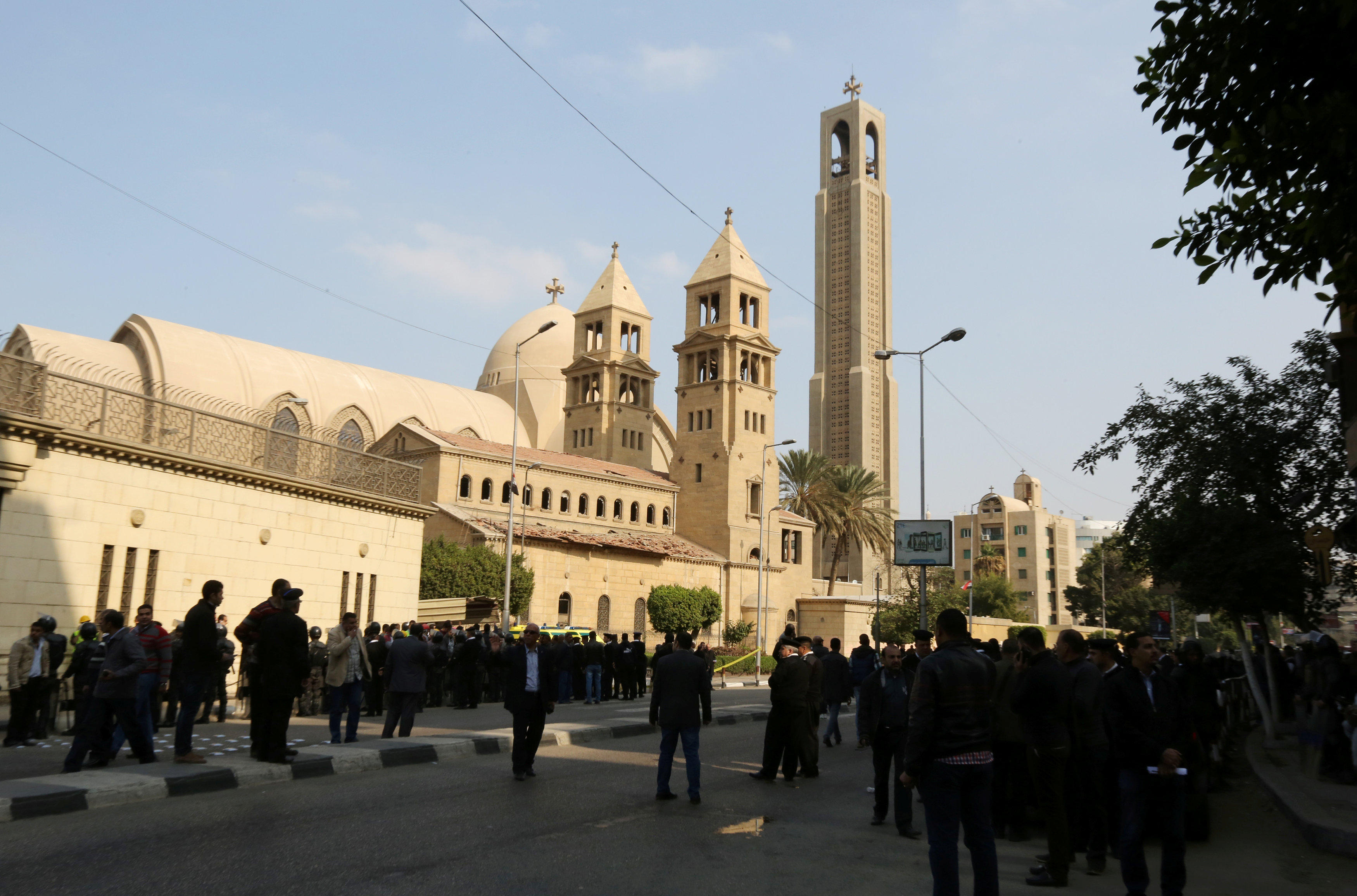 CAIRO -- Sunday morning Mass was drawing to a close at the chapel next to St. Mark’s Cathedral, the seat of Egypt’s ancient Coptic Orthodox Church, when Magdy Ramzy said there suddenly was a “shattering explosion like nothing I had ever heard before.”

A bomb ripped through the chapel in the cathedral complex in central Cairo, killing 25 people and wounding another 49, mostly women and children, one of the deadliest attacks on the country’s Christian minority in recent memory.

“It felt like the world has turned upside-down,” said the 59-year-old Ramzy, who was wounded behind the ear by shrapnel. He frantically searched the wrecked chapel, and then outside, for his wife, Sabah Wadie, Only later did he learn that she was killed, and his daughter-in-law and three of his grandchildren were wounded.

Ramzy sobbed uncontrollably at the hospital as he leaned on relatives for support.

“This is one of the acts of terror that we used to watch on television. Now, we saw it with our own eyes,” he told The Associated Press.

The bombing of the Boutrossyia chapel -- and another one Friday that killed six police -- were grim reminders of Egypt’s struggle to restore security and stability after nearly six years of turmoil.

Egypt has seen a wave of attacks by Islamic militants since 2013, when the military overthrew President Mohammed Morsi, a freely elected leader and a senior Muslim Brotherhood official. Many of his supporters blamed Christians for supporting his ouster, and scores of churches and other Christian-owned properties in southern Egypt were ransacked that year.

Since 2013, authorities have waged a sweeping crackdown, outlawing the Muslim Brotherhood, jailing thousands of mostly Islamist dissidents and killing hundreds in street clashes.

There was no immediate claim of responsibility for Sunday’s attack.

One of the worst previous attacks against Christians by Islamic militants was a 2011 bombing at a church in the Mediterranean city of Alexandria that killed 21.

The Islamic State of Iraq and Syria (ISIS) also has targeted Christians in the Sinai Peninsula, where it primarily goes after security forces. Most IS attacks in Egypt have been confined to security personnel and judicial officials.

Friday’s police bombing was claimed by a group that authorities say is linked to the Muslim Brotherhood. That group -- called “Hasm,” or “Decisiveness” -- distanced itself from Sunday’s attack in a statement that said it does not as a principle kill women, children, the elderly or worshippers. The Brotherhood, in a separate statement, condemned the attack.

The bombings are almost certain to undermine the modest recovery in recent months by the vital tourism sector after years of slumping that followed the 2011 popular uprising that toppled autocrat Hosni Mubarak.

They also could bolster the argument used by the government of President Abdel-Fattah el-Sissi that stability and security are top priorities if Egypt is to prosper economically and avoid sliding into the kind of chaos and violence now seen in countries like Libya, Syria and Yemen.

Sunday’s bombing was condemned by government and religious leaders, and drew calls for unity between Egypt’s Muslim majority and Christians, who account for about 10 percent of the country’s 92 million people.

Witnesses said the blast probably was caused by a bomb planted in the chapel. Bishop Moussa, a senior cleric, said there were unconfirmed reports of a woman posing as a worshipper leaving a bag in the women’s section before slipping out.

AP reporters who went in the chapel noted that the side where women are routinely seated suffered the worst damage. Pews were smeared with blood and stained glass windows and wooden cabinets were blown out. A broken pair of glasses lay next to a girl’s boots with leopard spots and a pink ribbon. A chandelier dangled precariously and a wall clock was stopped at 9:57 a.m.

“I found bodies, many of them women, lying on the pews. It was a horrible scene,” said church worker Attiya Mahrous, who rushed to the chapel after the blast. His clothes and hands were stained with blood and his hair was matted with dust.

Men and women wailed and cried outside.

“I saw a headless woman being carried away,” Mariam Shenouda said as she pounded her chest in grief. “Everyone was in a state of shock.”

“There were children,” she added. “What have they done to deserve this? I wish I had died with them instead of seeing these scenes.”

“The pain felt by Egyptians now will not go to waste, but will instead result in an uncompromising decisiveness to hunt down and bring to trial whoever helped - through inciting, facilitating, participating or executing - in this heinous crime,” a presidential statement quoted him as saying.

Several hundred angry people gathered outside the cathedral, chanting anti-government slogans and calling for the firing of the interior minister, who is in charge of security.

“We sacrifice our soul and blood for the cross,” some chanted. Others sang hymns and, raising their hands, shouted, “Lord, have mercy.”

Scuffles broke out when protesters tried to push police lines to move closer to the cathedral, but there were no immediate reports of arrests. Police in full riot gear arrived later.

Egypt’s Christians have long complained of discrimination, saying they are denied top jobs in many fields, including academia and security forces.

The church and many Christians have rallied behind el-Sissi, although there have been growing voices of dissent in the community. They say little has changed under his rule, with authorities failing to halt attacks on their churches and property.

“This government must resign, and if the president insists on keeping it, then he’d better resign as well,” said Gerges Wadie, the brother of Ramzy’s wife. He said he initially supported el-Sissi but now sees him as a “failure.”