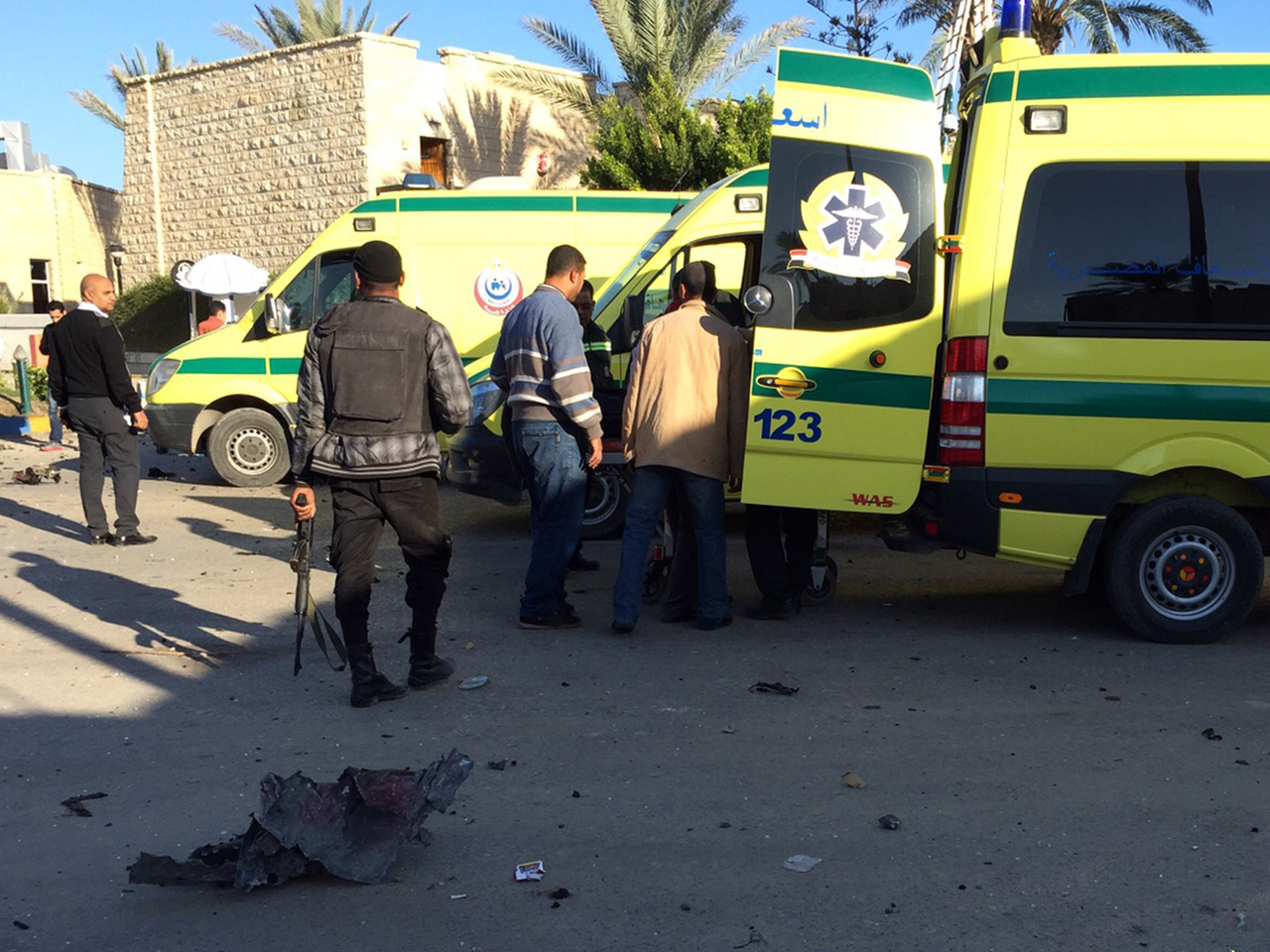 The attack on the Swiss Inn hotel in the coastal city of El-Arish was the latest violence convulsing the troubled peninsula, where Egyptian troops are struggling to put down an Islamic insurgency. The attack was quickly claimed by the Islamic State's affiliate based in Sinai.

The assault came a day after Egypt held the second round of parliamentary elections. Judges who supervised the vote in Sinai were staying in the heavily guarded hotel.

MENA's report said four policemen and a civilian were also among the seven killed, and that at least 10 people were wounded. The agency cited an unnamed security official as it often does.

MENA gave a higher death toll than the casualty tolls provided by the military and police in statements issued earlier in the day. The military said 12 people were wounded in the attack. It was not immediately clear why the army did not update its tolls later on Tuesday.

The attack began as Egyptian troops and policemen guarding the Swiss Inn opened fire on a suspicious, explosives-laden car approaching the building, blowing it up before it reached the hotel, the military said.

In the meantime, two militants slipped inside the hotel. One detonated an explosives vest in the hotel's kitchen, while the second opened fire in a hotel room. The military said all militants involved in the attack were killed, but gave no other details.

The Sinai branch of the Islamic State claimed responsibility for the attack in a statement posted by sympathizers on social media accounts. It said the attack was carried out by two militants: the suicide car bomber and a gunman, who is alleged to have opened fire inside the hotel before blowing himself up.

The group also posted pictures of the two attackers and identified them as Abu Hamza al-Muhajer and Abu Wadhaa al-Muhajer. Al-Muhajer means migrant in Arabic and is used by militant groups to refer to foreign fighters, an indication that they could have been from outside Egypt.

The militant group's account did not mention the third attacker cited in the military statement, and ISIS offered no evidence to back up the claim. The authenticity of the claim could not be verified.

Sinai was additionally shaken last month when a Russian passenger airliner crashed in the north of the peninsula, killing all 224 people onboard. Russia has said an explosive device placed onboard the Airbus 321-200 was to blame for the Oct. 31 crash, which took place 23 minutes after takeoff from the resort town of Sharm el-Sheikh in southern Sinai.

The local ISIS branch claimed responsibility for the crash and posted a photo purportedly showing the bomb used to down the plane. The crash led Russia to suspend all flights to and from Egypt, while Britain suspended flights to Sharm el-Sheikh. The suspensions have dealt a severe blow to Egypt's vital tourism industry, deepening the country's economic woes.

Egypt has been battling militants in Sinai for years, but their insurgency has gained steam since the ouster in 2013 of the Islamist Mohammed Morsi, Egypt's first freely elected president. His ouster by the military was led by then-defense minister Abdel-Fattah el-Sissi, who last year was elected presi