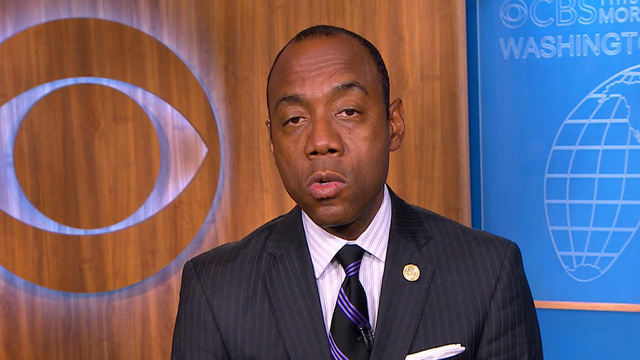 What began as a peaceful protest in Dallas Thursday night over fatal police shootings of black men had a tragic -- or as NAACP President and CEO Cornell William Brooks put it, "ironic"-- ending, when snipers opened fire, killing five police officers.

Brooks said mourning the deaths of Alton Sterling and Philando Castile -- two black men who were gunned down by police this week -- and honoring the fallen police officers were not "mutually exclusive."

"It's clear that we can appreciate and have respect for the work that law enforcement does day in and day out, where they put their lives on the line for their fellow citizens, even as we hold them to the highest standards of accountability, so we can grieve for the loss of their lives. But we can also grieve for the loss of Mr. Castile and Mr. Sterling and their families," Brooks told "CBS This Morning" Friday. "At the end of the day... our lives matter, whether your skin is black or your uniform is blue."

The deaths of Alton Sterling in Louisiana and Philando Castile in Minnesota this week -- both captured on camera -- triggered protests nationwide Thursday night. According to the Washington Post, at least 105 fatal shootings by police were recorded on camera in the first six months of 2016 -- up from 76 in the same time span last year.

Brooks said the growing number of videos of police brutality spoke to the apprehension of "citizens who are living in fear and apprehension because of a minority of officers, who defile the profession by their conduct."

Comparing it to the NAACP's campaign against lynching, Brooks described police misconduct as a form of modern "racialized violence," and said it could be fixed with some "political will" at the federal, state and municipal levels.

"We have to respond to the problem, not with hand-wringing but with policy. What that means at the federal level certainly is passing the End Racial Profiling Act, it means passing the Law Enforcement Trust and Integrity Act, it means establishing a national standard for excessive use of force," Brooks said. "We can, when we will -- when we purpose within ourselves to do so with a strategy and a plan -- bring police misconduct to an end."

Seven other police officers as well as two civilians were wounded in the deadly ambush, said to be the deadliest day for U.S. law enforcement since the Sept. 11, 2001 terrorist attacks.

While details on the number of suspects are still unclear, one has been confirmed. Twenty-five-year-old Micah Xavier Johnson was killed after police detonated a robot explosive in a parking garage where he was holed up after exchanging gunfire with officers.

For Brooks, this calls for another conversation that adds to "the talk" he and his wife have already had with their two sons about the police and their interaction with civilians.

"What we will say to them, as we have said to them, is in the same way that you do not judge all African Americans in a stereotypical way or Latinos or Jews or Gentiles or any group in the country, we cannot judge law enforcement through the prism of stereotype, of generalization," Brooks said. "That being said, law enforcement is in a state of crisis, racial profiling is real, police misconduct and police brutality is real. So we say to them 'be hopeful, be confident about our ability to affect change but also be vigilant and be aware that we face a crisis in the country.'"