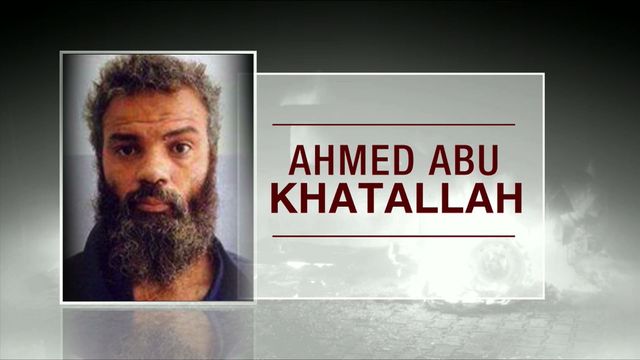 WASHINGTON The capture of an alleged leader of the deadly 2012 attacks on Americans in Benghazi, Libya, gave U.S. officials a rare moment of good news. Now, they are preparing to try the captured Libyan in the U.S. court system and pledging to double down on catching others responsible for the deaths of the U.S. ambassador and three other Americans in the attacks.

Khattalah is talking and is being described as being "somewhat cooperative," reports Orr. One official suggested it's a mixed bag - he's answering some questions but not others.

He had not been read his Miranda rights as of Wednesday afternoon. Once Khattalah is read his rights, a "clean team" of FBI interrogators will start over with fresh questioning in an effort to obtain information that would be admissible in court, Orr reports.

Khattalah, who was captured Sunday on the outskirts of Benghazi by U.S. special forces, was headed to the United States to face what President Barack Obama called "the full weight of the American justice system."

The Benghazi attacks, and the Obama administration's conduct in the aftermath, have long been a source of festering political discord. And some Republicans on Capitol Hill were quick to voice skepticism about the administration's plans to try Khattalah like a civilian.

They urged the administration to get as much intelligence out of him as possible before anyone reads him his rights to remain silent, supplies him with a lawyer and prepares him for trial in a U.S. courtroom. In fact, Sen. Saxby Chambliss of Georgia, top Republican on the Senate Intelligence Committee, said interrogation of the Libyan already was underway and "we hope to find out some positive things."

Some Republicans said Obama should be sending Khattalah to the U.S. military prison at Guantanamo Bay, Cuba, instead of U.S. soil, so that he could be interrogated at length.

"The president is more focused on his legacy of closing Guantanamo Bay than preventing future terrorist attacks like what happened in Benghazi," Sen. Jim Inhofe, R-Okla., said.

Senate Judiciary Committee Chairman Patrick Leahy, D-Vt., countered that Khattalah can be brought to justice in U.S. courts "just as we have successfully tried more than 500 terrorism suspects since 9/11." He said sending the Libyan to Guantanamo would be taking "the easy way out."

National Security Council spokeswoman Caitlin Hayden said in an email statement: "We have not added a single person to the GTMO (Guantanamo) population since President Obama took office, and we have had substantial success delivering swift justice to terrorists through our federal court system."

Meanwhile, the Libyan government denied that it had prior knowledge of the U.S. capture of Khattalah and demanded his return. It condemned the seizure in a statement read on television Wednesday. The statement said: "The government stresses its right to try Abu Khattalah on its territories and according to its laws."

Khattalah is charged with terror-related crimes in U.S. District Court in Washington. The Obama administration's policy is to treat terror suspects as criminals when possible and not send them to Guantanamo, like hundreds of terror suspects captured during the administration of President George W. Bush.

Republican Senate leader Mitch McConnell of Kentucky said the U.S. should skip the legal niceties and focus on interrogation.

"The most valuable thing we can get from this terrorist is information about who else was involved in this," McConnell told reporters. "We'll be watching closely to see how much information they glean from him and how they're handling it."

According to a criminal complaint unsealed Tuesday, Khattalah is charged with killing a person in the course of an attack on a federal facility and conspiring to do so; providing, attempting and conspiring to provide material support to terrorists that resulted in death; and discharging, brandishing, using, carrying and possessing a firearm during a crime of violence. Officials said he could face the death penalty if convicted of the first charge.

His arrest may not be the last.

FBI Director James Comey, speaking in Minnesota, said Khattalah's arrest sends a message to others who need to be held accountable for the Benghazi attacks.

A witness interviewed by The Associated Press following the attack said Khattalah was present at the building when it came under attack nearly two years ago, directing fighters. Abu Khattala acknowledged being there but said he was helping rescue trapped people. The Libyan was the commander of a militant group called the Abu Obaida bin Jarrah Brigade and is accused of being a senior leader of the Benghazi branch of Ansar al-Shariah in Libya, which the U.S. has designated a terror group.

As recently as last August, Khattalah told the AP that he was not in hiding nor had he been questioned by Libyan authorities about the attack at the diplomatic compound. He denied involvement and said he had abandoned the militia. Administration officials said Tuesday that despite his media interviews, he "evaded capture" until the weekend, when military special forces, including members of the Army's elite Delta Force, nabbed him.

The Pentagon press secretary, Navy Rear Adm. John Kirby, said that regardless of how openly the Libyan was said to have been living, the important point was that he now is in custody.

People should not think this was a situation where "he was going to McDonald's for milkshakes every Friday night and we could have just picked him up in a taxi cab," Kirby said. "These people deliberately try to evade capture."

The Sept. 11, 2012, attack in Benghazi, on the 11th anniversary of the attacks on the World Trade Center and the Pentagon, killed U.S. Ambassador Chris Stevens and three other Americans. Stevens was the first U.S. ambassador to be killed in the line of duty in more than 30 years. In the immediate aftermath, political reaction formed along sharply drawn lines that hold fast to this day.

With the presidential election near, Republicans accused the White House of intentionally misleading voters about what sparked the attack by portraying it as one of the many protests over an anti-Muslim video made in America, instead of a calculated terrorist attack on the president's watch. Obama, for his part, accused the Republicans of politicizing a national tragedy.

After 13 public hearings, the release of 25,000 pages of documents and 50 separate briefings, more congressional hearings are yet to come. One element in the ongoing political situation: The attacks unfolded while Hillary Rodham Clinton, now considered a likely Democratic presidential candidate, was secretary of state. Republicans have faulted her words and actions in many respects.