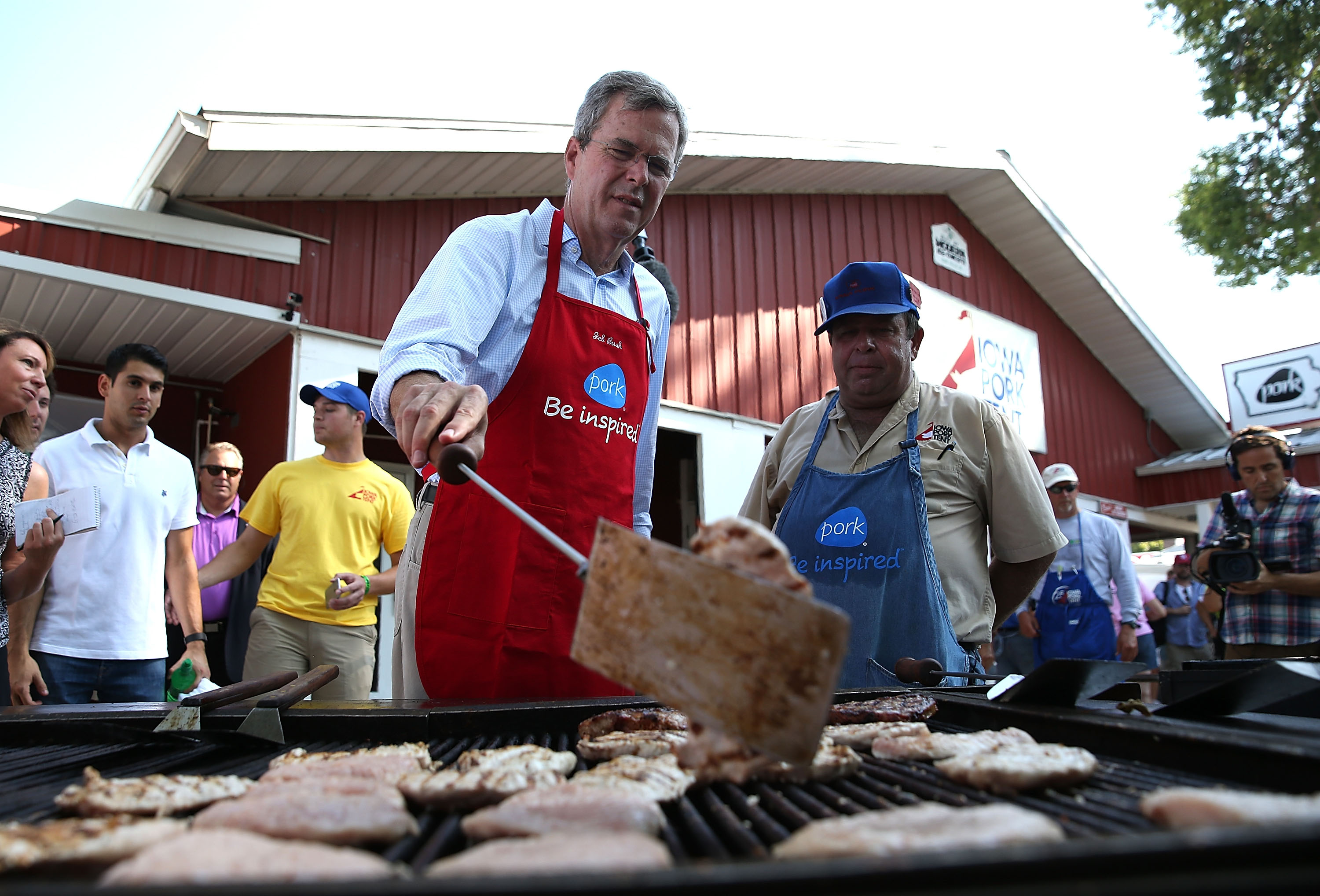 Over the past couple of weeks at the Iowa State Fair, thick crowds have engulfed most of the presidential candidates, and it was mostly the fairgoers with sharp elbows or cute babies who were able to get close enough to talk to and snap selfies with the candidates. Engaged voters jockeyed for position against reporters to get their questions in.

Kelsi Wolever, a petite 20-year-old junior at Iowa State University, had more success than most in getting close to the candidates. The environmental sciences and economics major was able to question six presidential candidates at the fair before she returned to school this week.

Admittedly, Wolever was also very determined, and she had a plan: to get candidates on the record about sustainability, renewable energy and preserving natural resources. Her aim wasn't to be confrontational - she just wanted to ask them questions formulated while she was a summer intern at the Environmental Law and Policy Center.

Energy is a big focal point in Iowa, where 28 percent of the state's energy comes from wind and where more than 60,000 jobs come from the ethanol and biofuel industry. Presidential candidates generally land in Iowa prepared for this line of questioning.

But Wolever was surprised to find the candidates' specific policy prescriptions left a fleeting impression. Instead, she was struck by the personal exchanges - the candidates' attitudes, the way they treated her, and their level of interest in renewable energy and sustainability.

"You never know how someone is going to respond and that was a little intimidating when I first started doing it but now I don't mind," Wolever explained. "When you are at home watching candidates on TV or reading about them, it is so easy to think of all these things about them in your head."

Wolever remembers which candidates who took the time to engage with her and those who brushed her off.

"With Mike Huckabee, we were walking while we were talking, and with Jeb Bush, you know, he will stop and talk to you," Wolever said, adding that she expected Huckabee to be "sweet," but walked away with a bad taste in her mouth because he seemed to lack passion. Huckabee also said he did not know the details of Sen. Grassley's federal wind energy Production Tax Credit (PTC) plan.

Wolever understood that her interactions with some candidates would be cut short because of their tight schedules. But even if they were being rushed along, their passion - or lack of it - was evident.

When Wolever finally fought her way through one particularly rambunctious crowd to get to Carly Fiorina, their conversation felt stunted. Fiorina would not stop moving as Wolever asked for her thoughts on alternative energy.

"She was the hardest person to talk to," Wolever recalled. Fiorina wouldn't make much eye contact. The former Hewlett-Packard CEO said she dislikes the idea of incentivizing groups to use alternative energy sources. Jeb Bush on the other hand was happy to talk about his own work on sustainability and the environment in Florida and seemed enthusiastic about the topic.

When Wolever spied Scott Walker, she had to dive into a feisty crowd, filled with both Walker supporters and protesters alike.

"He had a quieter voice and I think he was a little bit in a hurry," Wolever recalled.

She was also unable to talk much with Marco Rubio, but she recalled his friendly disposition as she took her photo with him.

Jindal on the other hand, the only candidate that Wolever met this summer before the Fair started, and he talked with her for 10-15 minutes. Wolever does not agree with Jindal on policy, and she assumed she was "going to hate him." But when they did talk, she was impressed by his thoughtful list of reasons not to support the Obama administration's push for renewable energy sources.

"After him taking the time and looking me in the eye, I was like, I can really respect this guy," Wolever explained.

Meeting candidates in person, she said, "can change some of the stereotypes you form and you create when you are in your house or seeing them and perceiving them in some other form besides face-to-face."

Here are some of the answers the candidates gave to Wolever below. The Environmental Law and Policy Center will continue its "caucus campaign" over the next few months.

BUSH: On a conservative approach to protecting natural resources

"When I was Governor, we started the most ambitious restoration project in the country, the restoration of the Everglades. There is a way to grow the economy and balance that out with also conserving wild, in this case, wild Florida."

FIORINA: On a conservative approach to protecting natural resources

"We must be responsible stewards of our resources, of our land, and of our planet."

"Senator Grassley has talked about a phase-out over time. I want to level the playing field across the board."

RUBIO: Wolever caught up with Rubio at a trip to Iowa before the State Fair - she wasn't able to talk with him at the fair

"One of the best ways to grow the economy is through the energy industry. Wind and solar should be a part of that portfolio. God blessed America with abundant coal, oil and natural gas. Let's open up more federal lands for safe and responsible exploration."

"If we're going to take action, it needs to be in concert with countries we trade with, the countries we compete with... Otherwise all that's going to happen is the energy-intensive industries are going overseas and the good paying jobs are going with them and we'll do nothing to help the environment and we'll hurt the economy."