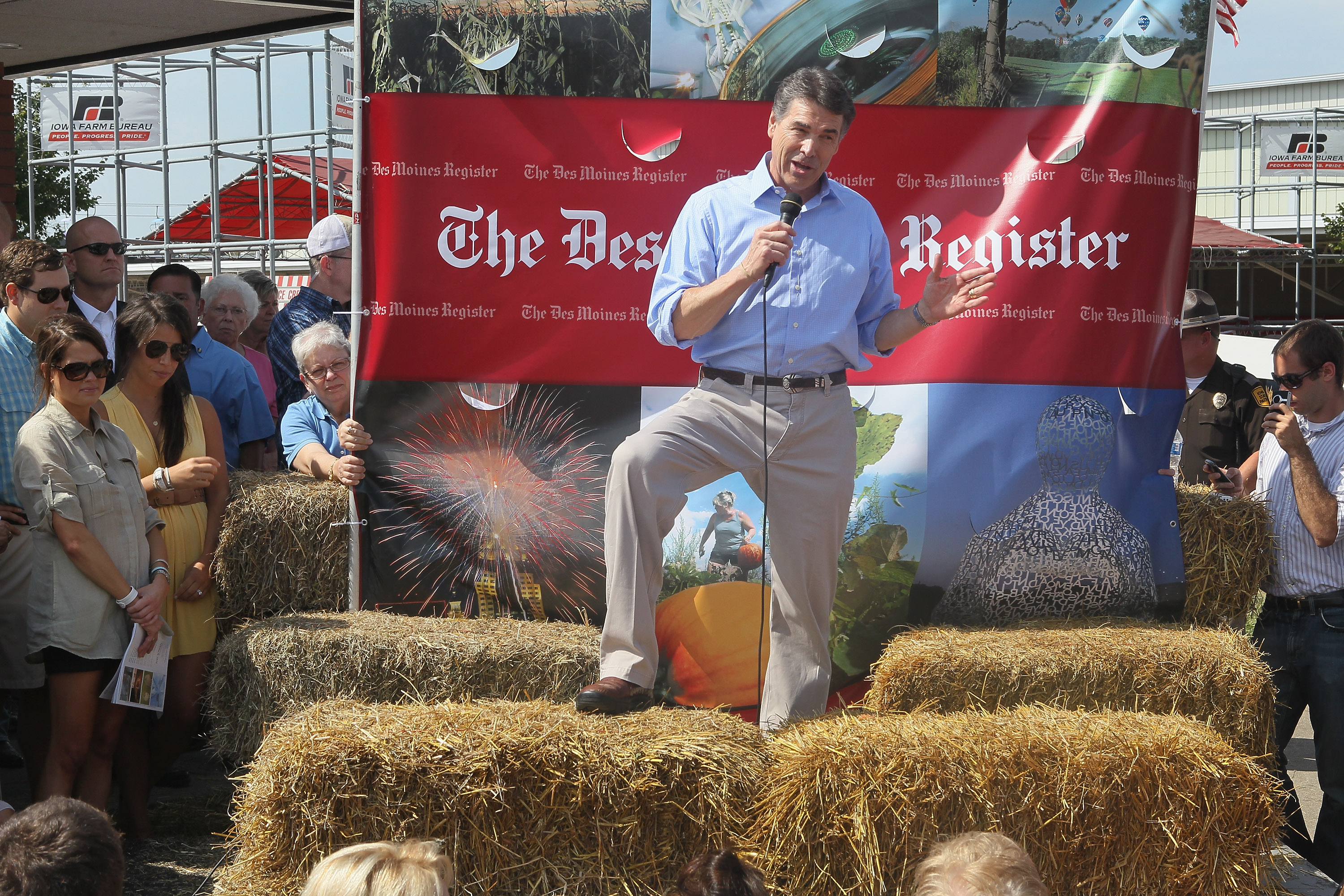 Des Moines Over the next 10 days more than 1 million people will descend on the Iowa State Fair, where they will have a chance to hear from 19 presidential contenders on the official stage known as the "soapbox."

The setup has all the fixings of a quintessential stump speech: 20 minutes, a wooden platform surrounded in hay bales, a mic and a motley, uncontrolled audience.

As candidates prepare for their 20 minutes in the Iowa spotlight and plot out their path around the fairgrounds, they must decide what their message will be, how to handle hecklers, what to wear and, of course, what to eat.

"Be mindful that everything you do will be photographed and everything you say will spread like wildfire," explains Craig Robinson, editor of The Iowa Republican.

Characterizations of candidates' past messages range from "broad brushstrokes" to "typical stump speech" -- Iowan political operatives agree that this is not a time for candidates to roll out a shiny new speech or a detailed policy plan. In 2007 then-candidate Barack Obama made a typical stump speech, accepted a beer at the Bud Light Booth and smashed bumper cars with his daughters and wife. According to Don Greiman, the Iowa State Fair Ambassador, Mr. Obama handled the situation like a champ. Ultimately, the fair is an exercise in face-to-face politicking.

The audience at the fair is consistently a mixed bag, meaning that Republican candidates will be faced with Democratic opposition and visa-versa for Democratic candidates. Consequently, candidates will interact with everyday people who love them and they must decide how to confront (or not) everyday people who loathe them. In years past the bellicose hecklers have presented a minefield for candidates. This year will be no different.

"If protestors show up, it is a free country, it is a public fairgrounds, that is part of the process, but we have come close to having the pushing and shoving," explains Carol Hunter, news director of the Des Moines Register. She hopes that everyone "lets the candidates speak to the crowd and have their say."

During his soapbox appearance in 2011, Republican candidate Mitt Romney got in a yelling standoff with a heckler over Social Security taxes which led him to say "corporations are people, my friend." That single line lived with Romney throughout his campaign.

Some say that Romney's haunting back and forth is a perfect example of why candidates should avoid hecklers at all costs.

On the flip side, Iowans don't simply want to meet every candidate, they also want to interact with every candidate -- and there is even a thirst for feisty back and forths -- so engaging the crowd can wield positive returns. Kevin Madden, Romney's 2012 senior adviser and spokesman, pushes back on the negative characterization of Romney's 2011 back and forth, harking back to the notion that it showed Romney's fighting spirit.

"What it allowed him to do was sort of step out of that caricature that many of his opponents had tried to draw around him that said, 'You know, here is a stiff boardroom guy, here is some guy who is protected by a bubble,'" Madden said.

Furthermore, Romney's spontaneous back and forth spurred specific conversations about corporations that had yet to become a cornerstone of the election.

"What it did inside the Republican primary is that it fostered a debate about free markets and about prosperity and about the government overreach that ultimately was helpful," Madden explained.

"On the plus side, very little to nothing, and on a negative side, potentially very large," explains a political operative when looking at history to determine just how influential the candidates performances at the State Fair will be. Coming at it from this perspective, candidates should avoid confrontation and "stay cool in the heat."

While the jury is still out on how involved the candidates should get with the hecklers, advice on attire and food is less nuanced -- especially because the State Fair will be getting even more attention this year due to the cancelled Straw Poll.

Candidates should be dressed "Fair appropriate," explains Robinson. That means jeans, a t-shirt or a button down and maybe some cowboy boots -- or really any shoes that can withstand picking up the occasional animal poop. Fred Thompson is the archetype failure in this realm: he wore Gucci shoes and spent the day wheeling around in a golf cart at the State Fair during the 2008 election cycle. Temperatures are expected to hit 90 this weekend, so fair organizers add that clothing faux-pas aside, the candidates also need to dress coolly.

On the food front, there is one resounding warning call: avoid the corndogs. At this typical Americana event, food is king, and everyone will talk about the food the politicians eat. The media will also take photos of the candidates as they eat.

"It does not make for a good visual," adds one political operative. If a candidate really wants that corndog, they should wait until they are in the car.

But with food spilling out of the fair's every nook and crannie, candidates have to eat something "Iowan," Grieman says. He chuckles when recalling a no-no in 2003: then-presidential candidate John Kerry ordered a pink smoothie.

This will be the 12th year that the Des Moines Register soapbox will stand as the official location for candidates to come through and have their voices heard -- but presidents dating back to Hoover and Eisenhower attended the fair, and candidates have campaigned at the fair for decades.

Candidates should be ready to be stalked, mocked, force-fed and sweaty, but Hunter explains that the fair is also an opportunity for the Iowans to "meet people who are making a real difference in our public discourse." Hunter recalls the longing stares and chitter chatter as Republican John McCain made his way through the fairgrounds in 2007. A small boy tugged at his father, asking him who it was. His father told him it was an American war hero.