MINNEAPOLIS (WCCO) -- From the moment she enters the studio, to the time she sits down, it's clear Tom Barnard, Michele Tafoya and the entire KQRS morning team are very comfortable saying just about anything to anyone.

Barnard is a broadcasting legend. He has led the highly-rated KQRS morning show for 31 years.

About a year ago, his longtime co-host left.

On the very first day Barnard met Tafoya, he knew he could work with her.

He tested her with the following story. Remember, these are his words, we're just telling the story.

"Adrian Peterson beating his child is unbelievable," Barnard said.  "I said, 'Michele, you're Spanish; you were probably beaten as a child.' And she started roaring."

They roared again the morning he re-told the story.

Tafoya quickly chimed in, "I love the fact that he's willing to go politically incorrect. I just love it. We need it in this day in age," she emphasized.

That was the moment Barnard knew he could work with her. But what kind of guy has that kind of litmus test?

Well, a guy that grew up being tested all the time.

Barnard grew up in poverty in north Minneapolis.

During an interview in January of 2015 he told us, "You grow up in a neighborhood like this, you are convinced you have no shot, because you're told basically, 'I'm never going to make it out of here so why try?'"

Barnard says his father suffered from mental illness, was sometimes abusive and didn't support his family.

"My father and I never got along," Barnard says. "I wish I could tell you I loved my father, but I never did. I felt sorry for him. Once you realize -- you get older and you realize how tormented he was, you feel sorry for him."

His mother's work ethic was his motivation. Seeing her raise seven kids on a waitress' salary inspired Barnard and gave him hope. Barnard says growing up around someone as tough as her made him gravitate to strong women, like his wife, and Tafoya.

Over time, Barnard would learn that Tafoya has weathered some experiences that made her tough and resilient as well. You need to be confident to cover the NFL, but there's a lot more to this sideline reporter and mother of two.

Tafoya grew up in Manhattan Beach, California. She was a bigger kid, until she turned 13 and stopped eating. At one point, the 5-foot-5 Tafoya weighed just 87 pounds. 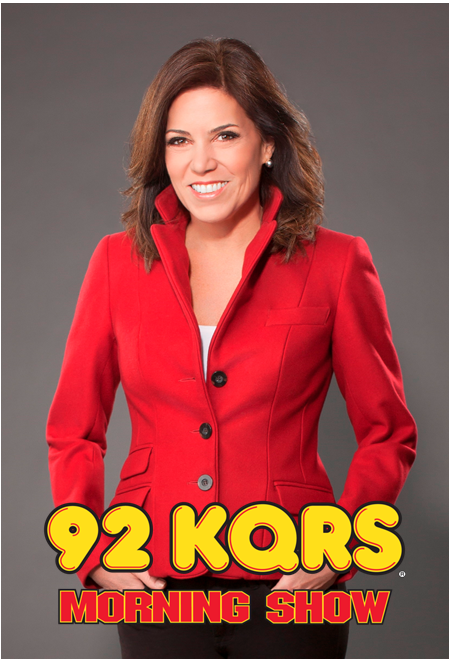 "When I was an anorexic, my family was so angry with me," Tafoya remembers. "But I didn't stop eating to make them mad. This was something that felt beyond my control."

She overcame her eating disorder, pursued her sports broadcasting career and years later, she moved to Minnesota.

Tafoya married Mark Vandersall in 2000. They tried to start a family, but after two miscarriages in one year, they started seeing a fertility specialist. Eventually, they tried in vitro fertilization. She got pregnant with twin boys but miscarried, again.

In November of 2007 she said, "You're pregnant with these babies and then they go away."

The sorrow would eventually give way to joy with the birth of Tyler.

A woman, so grateful for her family, was in studio with Barnard, and heading for a big surprise.

"He is a family man first and foremost," Tafoya says of Barnard. "I didn't expect that just because I didn't know him. And that spoke volumes to me, because if this guy is that devoted to his family, he's got his values straight. So that really hit me initially. That was going to be important and we could connect on that."

The station seems pretty confident the connection will last and get even stronger.  KQRS Operations Manager Scott Jameson told us Barnard is under contract at KQ through June of 2021.  He says Tafoya also has a multi-year contract with the station.

Meanwhile, the Tom Barnard Podcast is getting stronger. It's in its sixth year and is now in national syndication with Westwood One radio.

Jameson says the podcast recently passed 300,000 monthly subscribers. You can download or listen to it here.

The blunt and honest talk seems to be working.

"You're never going to get bologna from us," Tafoya says of her and Barnard. "Unless we're at a deli."