BOSTON (CBS) - I am having a strong feeling of deja-vu as I write this.  In fact, I feel like perhaps we could just re-publish my blog from last Wednesday (or the Wednesday before that at this point).

No doubt we are locked in a persistently stormy pattern with about two storms per week. We get a fairly benign or weak storm about midweek and then a much more significant storm each weekend.

This pattern looks as though it will continue for at least one more week as we are eyeing what might be yet another plowable snowfall this weekend.

It is early of course (yes I feel like I have said that a few times before too), but weather models have been pretty locked into this one for a while. Many of the finer details will need to be worked out in the coming days but, at this point, some 72 hours or so away, the odds are favoring a hit on southern New England.

This storm will be different from the last few in many ways.  It will likely fall in-between the last two storms as far as impact and snow totals.

It certainly will not rival the Blizzard of 2013, our fifth biggest snowstorm on record and it is very likely to be more impactful than last weekend's storm which dropped 3-to-6 inches in eastern Massahcusetts and much less to the north and west.

So here are the details as I see them now, of course subject to change as we get closer to the weekend.

The first drops and flakes will begin to fall Saturday afternoon, likely ramping up during the evening and peaking overnight and Sunday morning.

It may take until Sunday afternoon or evening before this one totally shuts off, a good 24 hours or so of rain, snow and wind.

You may have noticed I mentioned rain AND snow.  Precipitation type will not be so cut and dry with this storm like the last few which have been all snow.

During the initial stages of this storm (Saturday afternoon and early Saturday night) the winds will be out of the east-southeast, a relatively mild wind direction for the coastline and southeastern Massachusetts. 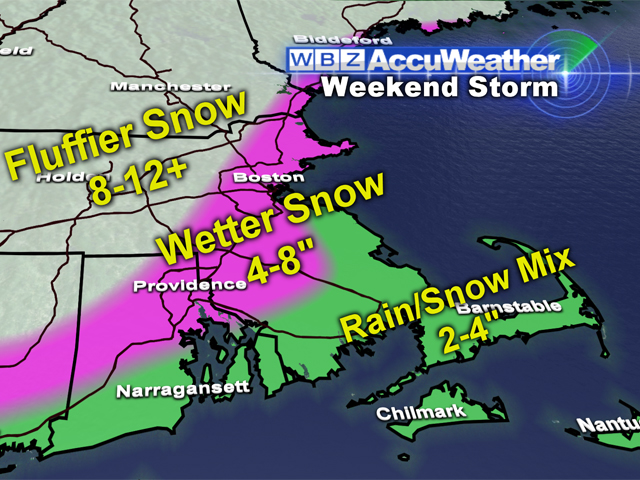 So there will likely be some rain involved in those locations for the first quarter to half of this storm.

After midnight and during Sunday morning, winds will turn to the northeast and draw colder air into the system, likely turning any rain over to snow in all locations.

This will be a heavier, wetter snow closer to the coast and much lighter and fluffier north and west of Boston.

Again, it is early, but this storm has the potential to dump 6-to-12 inches or a bit more where it stays all snow.

Where it is lighter and fluffier and accumulating more readily, I wouldn't be shocked to see upwards of 15 inches somewhere (Worcester Hills perhaps?).

Amounts would be lower where snow mixes with rain and also due to the heavier nature of the snow compacting it down. 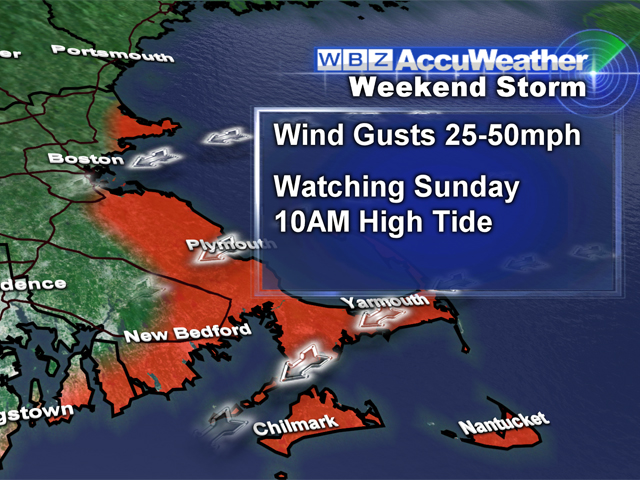 The winds will not be as fierce as last weekend or during the blizzard, but along the immediate coastline and especially over southeastern Massachusetts they will be very gusty, perhaps damaging, northeast winds early Sunday morning through midday Sunday.

At this point , the high tide to watch would be Sunday morning's which occurs right around 10 a.m.  It is not astronomically that high, but minor to moderate coastal flooding is possible.

I can't stress enough that at this point we are still 3-to-4 days away from this event and many details need to be hashed out.

What I wrote above is just a summary as we see things now at this early stage, no doubt there will be changes to come.

Please stay tuned to updated forecasts for the remainder of the week and if you have weekend plans you may want to start preparing for yet another weekend disruption.