NEW YORK (CBSNewYork) -- An FDNY emergency medical technician was hailed as a hero Monday, after a suspect described as an "emotionally disturbed person" grabbed a gun and started shooting outside Harlem Hospital – leaving an officer wounded.

As CBS 2's Kathryn Brown reported Monday, EMT Brendon Hernandez, 25, said he was acting on instinct when he jumped on a suspect who police said had just shot Officer Fausto Gomez in the foot outside Harlem Hospital early Monday morning.

"All I know is he had a gun in his hand, and I removed it," Hernandez said.

Hernandez said he was acting on instinct when he jumped on the armed suspect and yanked the loaded gun out of his hand.

"I was scared," he said. "I was scared for my safety, my partner's safety, especially the cops, and also people walking by -- you know, that bullet could have gone anywhere.

The events leading up to the act of heroism all started around 5 a.m. when police got a call that a person was throwing bottles on the street in Harlem. That was where they found suspect Guiteau Idore, 42, alone on the street, police Commissioner Ray Kelly said.

"The police officers who responded determined that the individual who they located was an emotionally disturbed person," Kelly said.

When officers got to the scene at 117th Street and Lexington Avenue, they took Idore into custody -- planning to bring him to Harlem Hospital for a psychiatric evaluation.

Hernandez was driving the ambulance.

Idore was handcuffed when they arrived at the hospital, Kelly said. But at that point, Idore tried to run but Gomez and a second officer, John Chiodi, caught him, Kelly said.

As Gomez and Chiodi were walking on either side of the suspect, Idore, with his hands still cuffed behind him, somehow managed to grab the gun from Chiodi's holster and fired twice, hitting Gomez in the foot, Kelly said.

That was when Hernandez ran over to the suspect, grabbed the gun from Idore's hand and cleared it of bullets, Kelly said. He then immediately began working to save Officer Gomez. He loaded Gomez onto a stretcher and got him into the emergency room within minutes. 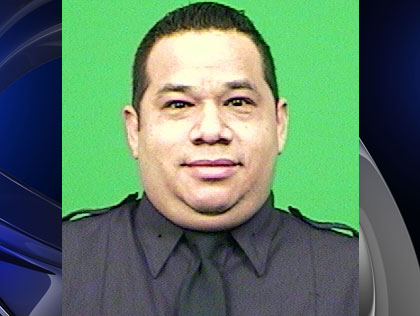 Idore was taken into custody and brought to another hospital for an evaluation, police said.

"This could have been an awful lot worse, but it still highlights the dangers that our police officers face every day -- they have to deal with situations that are unpredictable and with people who are unpredictable," Mayor Michael Bloomberg said.

Kelly praised Hernandez, who he said spoke to him about joining the police department.

"He did an outstanding job," Kelly said. "We understand EMT Hernandez has aspirations of becoming a New York City police officer and to us, he's certainly demonstrated that he has what it takes to do the job."

Hernandez said he has taken the test to become a cop, but so far he hasn't met all the qualifications.

Gomez, 40, who has been on the job for seven years, was treated in the hospital and is expected to recover fully.