'Hart of the Order'
By Sean Hartnett
» More Columns

While many Americans were fixated on Wednesday's Obama-Romney debate, another national debate has captured my attention.

Baseball debates, not political debates, are the kind that get my blood pumping. The awarding of the 2012 American League MVP will be one of the most disputable in recent history.

One group of writers will firmly believe that Miguel Cabrera should be the automatic MVP for winning the first Triple Crown since Carl Yastrzemski 1967.  While another set of writers will argue that Mike Trout helped the Angels win in more ways than Cabrera ever could for the Tigers.

You couldn't conceive two MVP candidates that provide such conflicting cases for their candidacy.  It's similar to the viewpoints held by Republicans and Democrats, you'll have old guard writers who will cling to the importance of the Triple Crown and new-age writers who will favor sabermetric measures such as WAR and range factor (RF) -- and you'll never get either side to agree with one another.

Maybe I can help bridge the gap between the two warring parties of old-fashioned writers and modern day sabermetricians.  After all, the most important thing is that we're all baseball fans first and foremost. 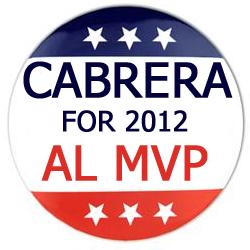 Since Miguel Cabrera has won the MLB's first Triple Crown in 45 years, some writers believe this is an open-and-shut case.

Cabrera not only won the Triple Crown, but earned the award in a season where he moved across the diamond to third base. Actually, his fielding statistics weren't terrible.  His fielding percentage was higher than Kevin Youkilis and Cabrera tied Kansas City's Mike Moustakas for the MLB lead with 127 putouts.

Babe Ruth and Lou Gehrig are the only players in major league who have equaled Cabrera's 2012 numbers in hits, home runs, average, RBIs and doubles in a single season.  That's pretty rare company.

Cabrera on-base plus slugging mark of .999 is 36 points higher than Trout.

Unlike Trout, Cabrera led his team to the playoffs.  Whereas Trout struggled in September, Cabrera continued to put up huge numbers in the last full month of the 2012 season and final regular season games in October.

Undoubtedly, Cabrera's late-season offensive output is a major reason why the Tigers held on and captured the AL Central by 3 games over the Chicago White Sox. 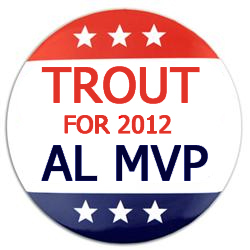 Some baseball columnists have suggested since Trout did not play a full major league season, it will hurt his MVP chances.  I couldn't disagree more with that viewpoint.

Trout's impact on the Angels' season is proven by the impact he made after his  April 28 call-up.  Los Angeles was 6-14 when Trout was inserted into their lineup. By the end of May, the Angels' record quickly improved to 27-26 thanks greatly to Trout's all-around abilities on the diamond.

Instead, homegrown talents such as Trout and Jered Weaver were the ones powering the Angels' turnaround.

Pujols went homerless in April and was batting .197 in mid-May.  During the middle months of the season, Pujols began hitting again like the player nicknamed "The Machine."  His bat cooled off when the Angels needed him most -- Pujols only hit 1 home run in 106 September at-bats.  Wilson, meanwhile had a brutal second half -- posting a 4-5 record and 5.54 after the All-Star break.

Trout suffered a similar power outage as Pujols in September.  After five consecutive months of elite play, Trout had a horrid September as he hit .257 with just 6 RBIs in 101 September at-bats.

How Important Is The Triple Crown?

I was born in 1984 and began regularly watching baseball at 7.  Soon, I came to understand baseball history and dreamed of seeing a Triple Crown winner.  When you're raised by a baseball-historian mother who grew up watching Mickey Mantle an Frank Robinson -- such a rare feat has a certain allure.  I'm not sure if younger baseball fans have a similar fascination with the Triple Crown.

During my childhood, I spent a lot of time at the local baseball card store convincing the owner to take the 1960 Topps Carl Yastrzemski rookie card out of the display case.  As a kid, I obviously didn't have the funds to purchase such an expensive card just like Milhouse in an episode of "The Simpsons."

Throughout my youth, I hoped to see a Triple Crown winner.  Gary Sheffield came very close in 1992, but was fell two homers short of Fred McGriff and nine RBIs shy of Darren Daulton.  In 1997, Larry Walker finished six points behind Tony Gwynn for the batting title and 10 RBIs behind teammate Andres "Big Cat" Galarraga.

Now, as an adult who understands the usefulness of sabermetrics -- my opinion of the Triple Crown has changed significantly.  I recognize batting average and RBIs as useful, but flawed statistics.  On-base percentage gives a clearer indication of a player's ability to reach base and RBIs are as much as team statistic as they are an individual measure.

The Triple Crown is in need of an update.  Perhaps, a modern day Triple Crown replacement would substitute average with on-base percentage and RBIs with WAR.

My adult sabermetic-appreciating self crushes my childhood self who once adored the Triple Crown. It's similar to the chess game in Seinfeld where Jerry's brain forced his libido into checkmate and decides to break up with an attractive woman whom he shares little common interests.

Therefore, Cabrera winning the Triple Crown will not factor into my determination.

Critics of Trout's MVP candidacy will point to the Angels missing the playoffs as a strong reason why Cabrera should win the award, but Los Angeles finished a win better record than the Tigers at 89-73.

Trout's WAR is 3.8 points higher than Cabrera.  Actually, Robinson Cano's WAR of 8.2 is second best in the American League.  The Angels' record since Trout's call-up on April 28 was the best in all of baseball at 83-59.

While Cabrera's fielding isn't as bad as some have suggested, he's not a Gold Glove caliber third baseman and his defensive WAR was -0.2.  Also, Cabrera is never going to steal 10 -- let alone 49 bases.  Trout's range factor of 2.7 was the 4th-best of all major league center fielders and his defensive WAR was third-best among center fielders at 2.2.

Trout impacted games in more ways than any player in 2012.  His 10.7 WAR not only led the majors, but ranks for 20th-best in major league history among batters and is only 0.3 points below Mickey Mantle's WAR in his 1956 Triple Crown season.

It might be heresy to some, but Trout's stunning rookie season is even more impressive than Cabrera's Triple Crown year.

Who is more deserving of the 2012 AL MVP?  The Triple Crown-winning Cabrera or all-around phenom Mike Trout?  Sound off below and send your tweets to @HartnettWFAN.