Last week I was listening WFAN host Mike Francesa, and a caller came up with an interesting theory. The man basically told Francesa that the reason why the DH rule was in existence was because the American League was late with regard to integrating their teams in the 1940s and 1950s.

The caller added that the National League dominated the American League in World Series and in All-Star Games in the 1960s, because of the predominance of minorities in the Senior Circuit. (Note that he was correct about the All-Star Games dominance, but in the 1960s the NL enjoyed only a 6-4 edge in the Fall Classic. Since then, as the numbers "evened out," the American League has won more World Series than the National League in every decade since the 1960s -- with the exception of the 1980s, where each league won five titles.)

The caller was against the DH rule and seemed to indicate that the American League presently used it because the Junior Circuit did not initially draw from the total pool of players and therefore, I guess, still had a residue of ancient (white?) sluggers who could not run or play the field.

Needless to say, I could not follow his convoluted "logic."

Neither did Francesa, who pointed out that virtually every league on the planet presently uses the DH, with one notable exception: the National League. Francesa also predicted that it is only a matter of time until the Senior Circuit follows suit.

Francesa also mentioned that the players union would never allow MLB to get rid of the DH for the simple reason that designated hitters usually make some pretty big bucks.

I totally agree with Francesa.

But, on the more important issue, I also decided to find out exactly when each of the "original 16" MLB teams integrated. I came up with the following list. 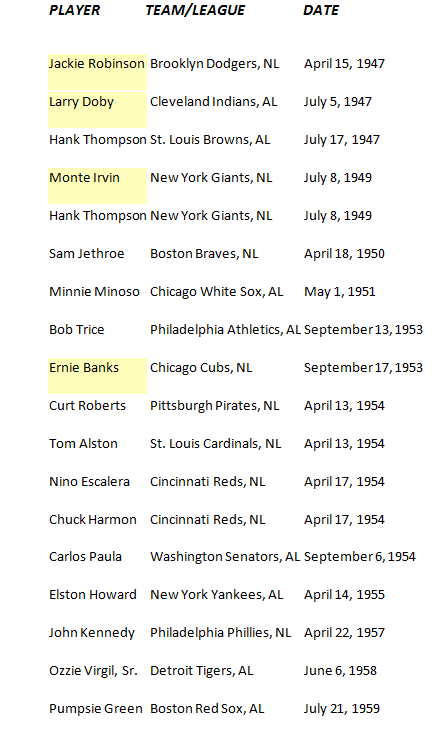 There is no doubt that the National League (read: Dodgers) took the lead in 1947 in breaking the color barrier. However, it took more than two years for a second NL club to integrate.

There is also no doubt that the National League did reap the benefits of having Hall of Famers like Willie Mays, Hank Aaron, Ernie Banks and Roberto Clemente play for them in the Midsummer Classics. The American League dragged its heels, with the Yankees, Tigers and Red Sox being three of the last four teams to right this shameful wrong.

In a sense, the leagues began to "even out" when players like Frank Robinson went from the Cincinnati Reds to the Baltimore Orioles in 1966. Robby had a pretty good year, winning the Triple Crown, the AL MVP and leading the Birds to a four-game sweep over the Sandy Koufax-Don Drysdale led Dodgers. He earned MVP honors in that series.

Hopefully we are at the point where we don't have to count how many players of each color we have on MLB teams.

And, hopefully, we can internalize the most famous words of Martin Luther King's most famous speech, where Dr. King proclaimed that the content of character and not the color of skin was all that mattered.