This is a follow-up from my previous column, where the question under consideration was: Is New York an American League city or a National League city?

Last week I submitted the first of a two-part effort investigating this very question. I considered this issue from a qualitative point of view. I looked at certain factors which presented themselves over the 111 years (1903 – 2013) in which New York City has hosted teams from both leagues (save 1958 thru 1961, when there was no National League team playing in "The Big Apple").

In this second part, I will take more of a numerical approach. I will not only look at the "league-wise head-to-head" win-loss records of the four teams in questions (New York Giants, Brooklyn Dodgers, New York Yankees and New York Mets), but will also consider "attendance" figures and attempt to bring these numbers into the discussion. Finally, after a few comments, I will arrive at my own conclusion and welcome the reader to do the same.

To review, the New York Yankees, Brooklyn Dodgers and New York Giants played in the same city from 1903 through 1957. The Dodgers and Giants then headed for the West Coast, and New York City had no National League representative until 1962, when the New York Metropolitans came into existence. Since then, from 1962 until the present, The Big Apple has housed both the Mets and the Yanks.

To get to the business at hand, as indicated above, I will consider two primary statistics: win-loss records and attendance figures. While fans do not always turn out for a winner, history has clearly indicated that when teams do win, they are more likely to draw more fans than if they fielded a losing team.

It pretty much follows, then, that if a team is better on the field and more fans are coming to the home field of the better of two teams (or the best out of three teams), it seems plausible to conclude that the league which is represented by this team is the "preferred" league in the city.

The win-loss records of the teams in question were easy to obtain. I accessed all the statistics from Baseball-Reference.com. The following three tables reveal how the New Yorkers performed on the field. 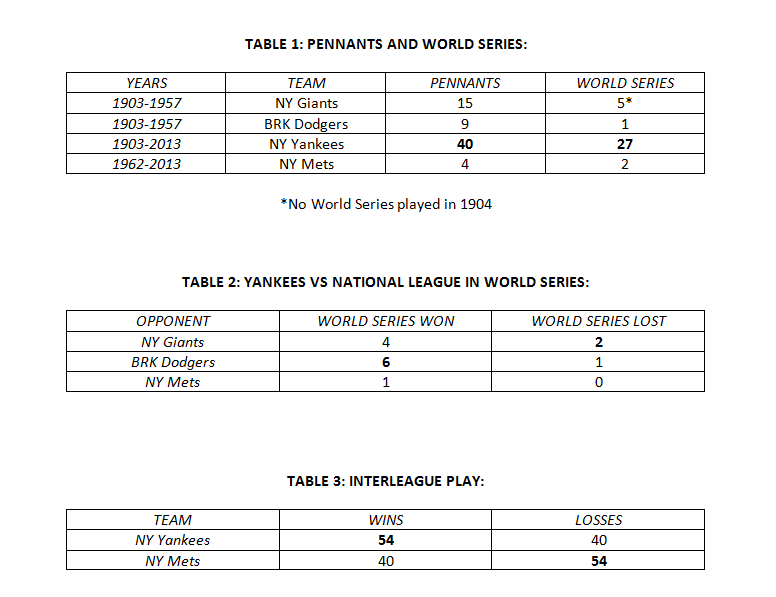 If New Yorkers love a winner, then, based on the data above, The Big Apple is clearly an American League city.

I next took a look at the attendance figures, where all statistics were taken from the following page: http://www.baseball-almanac.com/teams/laatte.shtml.

Unlike the win-loss records, the attendance figures were much harder to analyze due to a number of factors, especially when trying to compare the National League versus the American League. This was primarily due to the fact that until 2000, the Senior Circuit used "turnstile" numbers while their counterparts in the American League used "ticket sales."

Most probably, all things being equal, the National League's method of reckoning would have given them a figure "less than" what would have been reported for the American League. For example, if in 1990 the Mets reported 2,000,000 as their season's attendance and the Yankees reported the same number, chances are the Mets would have sold more than 2,000,000 tickets. But by how many? That's the question.

What I decided to do was to adjust National League attendance figures from 1903 through 1999, by multiplying them by a factor of 1.1. So, in the example above, the 1990 Mets would have had an "Adjusted Attendance" of 2,000,000 *1.1 = 2,200,000. This means that 200,000 tickets were unused. Is that reasonable? Clearly this factor could be raised or lowered. My strong suspicion is that it should be lowered to perhaps 1.05. In any case, for the sake of argument, all "Adjusted" comparative National League seasonal attendance figures (from 1903 through 1999) were multiplied by 1.1.

The following tables summarize the New York City attendance figures from 1903 through 1957, (Giants, Dodgers and Yankees) and from 1962 through 2013 (Mets and Yankees). Note that this PDF file contains all seasonal information. At the bottom of this column I have provided a key to identify all columns. 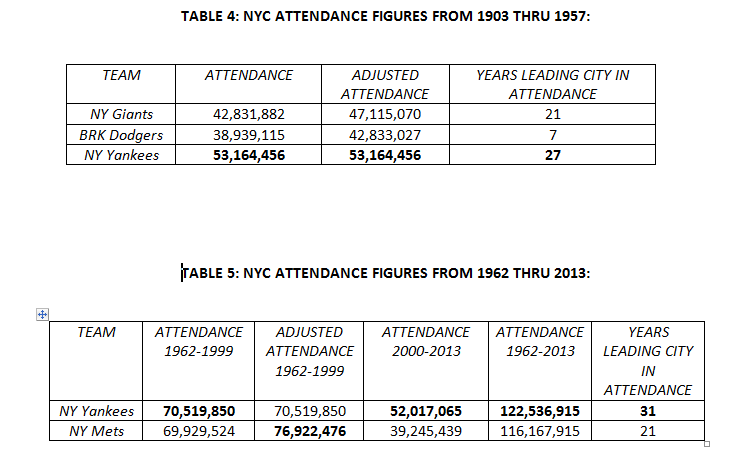 These numbers pretty much speak for themselves, no?

A final comment about "league preference": The fact is that from 1903 through 1957, the National League played approximately twice as many games as the Yankees did in New York City. This was because there were two National League teams in The Big Apple. Now, on the surface this would seem to have given an enormous edge to the Senior Circuit. Yet, the numbers do not seem to bear this out.

To be sure, there have been ebbs and flows, and there were times when John McGraw's Giants and the Amazin' Mets owned the city. But by and large -- both on the field and in the stands -- it seems that for a majority of seasons, a majority of New Yorkers preferred the American League. This has been especially true in "recent" times. The last time the Mets outdrew the Yankees was in 1992.

Next time, just to round out this topic, "By The Numbers" will present a comparison between an all-time Yankees team and an all-time New York City National League team. 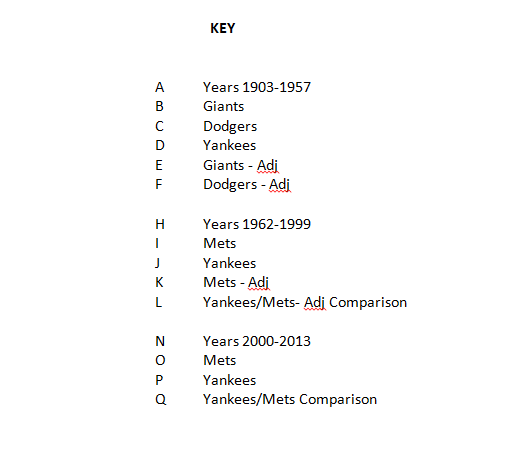