The other day, a talk-show host on a local all-sports radio show made a comment to the effect that, while the Yankees presently "own" New York, this was not always the case. In the past, he said, New York had been a "National League" city.

At first blush, it would seem that the league which had the New York team with the most fans would determine which league New Yorkers preferred.

This got me thinking if there was any way to indicate precisely when "The Big Apple" was indeed dominated by fans of the Senior Circuit, and when American League followers (read: Yankees) were in the majority.

In this first of two columns dedicated to looking into this question, I will take an approach which is both subjective and qualitative. I will take a look at both temporal (historical) and spatial (geographical) aspects of this issue. In my follow-up piece, I will look at some objectively measurable quantities (victories, attendance figures, head-to-head competitions, etc.) and hopefully -- when all is said and done -- the reader will arrive at a plausible conclusion.

To begin, the year 1903 saw the first time that three teams played within the five boroughs which now comprise New York City. The Giants, Yankees (also known as the Highlanders) and the Dodgers (also called the Robins and the Superbas) all vied for local fans. John McGraw ruled his Jints with an iron hand and won a number of pennants and a World Championship (1905).

Whether the Dodgers (one pennant) or the Yankees (no pennants) were the second-favorite team in town is immaterial. The New York Giants ruled New York. From 1903 until 1919, New York was a National League City.

In 1920 Babe Ruth arrived. In 1925, Lou Gehrig started to play,  and he didn't miss a game for a decade-and-a-half. And in 1936, Joe DiMaggio came aboard, and would lead the Yankees to four straight titles. Even with the likes of Carl Hubbell and Mel Ott, from 1920 untill 1939 New York was an American League City.

From 1940 through the late 1950s, the three New York teams dominated postseason play, especially the Dodgers and the Yankees. The Bombers were nearly unbeatable in October. And heated debates on street corners in Manhattan, the Bronx and Brooklyn (Staten Island and Queens, too!) about the three New York City center fielders -- Willie, Mickey and The Duke -- were reflective of the passion New Yorkers had for baseball. During this period, one is tempted to say that New Yorkers were really aligned with their boroughs, giving the National League a 2-1 edge over the Junior Circuit.

However, the attendance figures (next column) may reveal something different, especially in light of the fact that the Dodgers and Giants would soon abandon New York for greener pastures. For now, let's say that New York was pretty much split on this question from 1940 until 1957.

The year was 1958. With the Dodgers now in Los Angeles and the Giants now in San Francisco, New York was clearly an American League city from 1958 until 1961, with the Yankees winning three pennants and two World Series in four years.

But 1964 was also a year of transition. The Yankees fired manager Yogi Berra after losing the World Series, after which Berra promptly went to the Mets.  The Yankees were getting old with icons like Mickey Mantle and Whitey Ford showing signs of their ages. The hallowed "House That Ruth Built," Yankee Stadium, was also showing its age, while the "New Breed," as the Mets were called, moved from the venerable Polo Grounds to Shea Stadium, a ballpark with no posts or girders to obstruct the vision of the fans.

As time went on, the Mets were slowly getting better and better, while the Yankees kept getting worse and worse. The Amazin's (as the Mets were also called) won the World Series in 1969, under the tutelage of Dodger legend Gil Hodges, and nearly won another title in 1973 under Yankees icon Yogi Berra. From 1965 until 1973, New York was a National League city.

But the pendulum was swinging back because of a bombastic shipbuilder by the name of George M. Steinbrenner. "The Boss" would become the principal owner of the Yankees, and would not quit until his Bombers were back on top of the heap. From 1973 through 1981, the Yankees won four pennants and two World Series. His Bronx Zoo teams -- comprised of Billy Martin, Thurman Munson and Reggie Jackson -- provided fodder for the back page of the New York Daily News virtually every day, and twice on Sundays. In some sense, the Mets did not even exist. From 1974 until the early 1980s, New York was an American League city.

The pendulum came back again in the early 1980s. With superstars like Dwight Gooden, Darryl Strawberry, Keith Hernandez and Gary Carter, the Mets would win the World Series in 1986. They owned New York not only that year, but for the next few years as well. However, they were to win no more pennants (until 2000).

By the way, the Yankees actually had the best record in the major leagues for that decade. But neither team wore the world crown from 1987 onward. So, primarily based on the second half of the decade, New York was a National League city from 1982 until 1989.

Over the next six years, the Mets finished with a winning season only once (1990). The Yankees did not start out well, but they began to turn the corner in 1993, and actually led the American League East in 1994 -- only to be stymied by a work stoppage. The tide was turning back to the American League. However, at this point, let us say that New York was pretty much split on this question from 1990 until 1995.

Regarding the 2000 World Series, New York hosted a Subway Series for the first time since 1956. The Yankees went on to defeat the Mets in five games, with most media reporting that there "seemed" to be more Yankee fans at Shea Stadium than Mets followers at Yankee Stadium.

In any event, from 1996 to the present, New York has been an American League city. 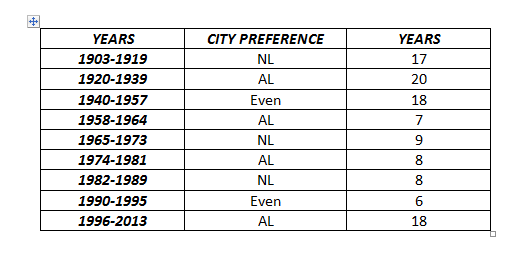 Finally, from a geographical point of view, the boroughs of Queens and Brooklyn seem to be Mets territory, while the Bronx, Staten Island and Manhattan have more Yankees rooters.

Long Island pretty much belongs to the Mets while southern Connecticut and North Jersey is saturated with Bombers fans.