Are you an actor on a budget? Having trouble finding that perfect lead on Broadway or a starring role in that new sitcom? Look no further. Here is your opportunity to learn how to make yourself the best candidate for the job. Take a few acting classes, meet some new contacts and have a little fun in the process. 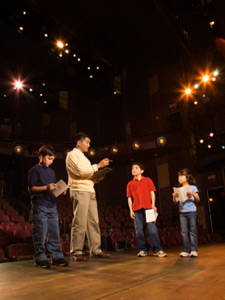 Actors Connection is an organization dedicated to connecting actors to seminars, classes, showcases and castings in both New York and Los Angeles. Classes connect actors to high-profile directors and producers in theater, television, film, commercials, print and more. One class that was offered this summer was a three-week Network Television Class with Clint Alexander, Director of Casting for FOX. This class, offered over three Tuesdays this summer, introduced students to "on-camera audition technique specific to television as well as delving into the business side of what truly goes on before, during and after a casting session."

Created by writer, producer and actor Mark Stolzenberg, this school offers one-on-one coaching, special events and classes for acting in television, film and commercials. Improv and comedy classes are also offered. Distinguished alumni have had stand-up shows, have been seen on television shows like "Law and Order" or "Blues Clues," have produced films and written books. Check out the classes offered to find one that caters to your personal interests.

This film and acting school is where students go when they're serious about becoming established in the acting world. Classes are taught by distinguished producers, directors, filmmakers and actors. Find a class in New York City or travel to Italy, France, Switzerland or even Australia. To brush up on your acting skills, take a week-long hands-on intensive workshop. Students who complete the course will receive a certificate in their designated program.

The Barrow Group encourages students to become playwrights, actors, storytellers, teachers and artists. The organization provides not only acting classes but also offers an arts center, theater company and showcases. Classes are provided for both adults and children throughout the year. There are numerous classes to choose from that range in prices. Take a good look at the schedule to find one that works for you.

Any number of classes are offered here including the perfect brush-up courses for professional actors. Perhaps the most enticing is the Acting Shakespeare Class which introduces students to "diction, rhythm, vocal melody [and] imagery." In a city that adores the Bard, this is the perfect place to jumpstart your career. Once you can perform Shakespeare, other roles should easily fall into place.

Jennifer Eberhart is currently an art history/museum studies graduate student at The City College in New York. She is an avid art enthusiast, and visits as many museums and galleries as she can in her free time. Her work can be found at Examiner.com.
Thanks for reading CBS NEWS.
Create your free account or log in
for more features.