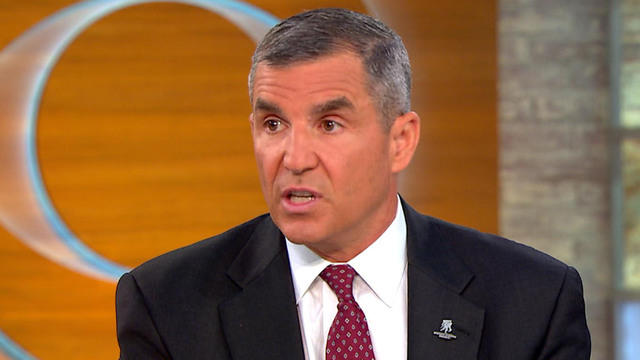 The new CEO of the Wounded Warrior Project said he was inspired to take on his new leadership role after watching CBS News’ investigation into the charity’s spending practices.

“When I watched those shows, that’s what really caused me to seek this opportunity,” retired Army Lt. Gen. Michael Linnington told “CBS This Morning” Thursday. “I saw firsthand the results of Wounded Warrior Project and other nonprofits in changing the lives of our wounded service members. So when they asked, I fought my way to the top -- and there were a lot of folks interested.”

Tax filings by Charity Navigator revealed the nation’s largest veterans’ charity spends just 60 percent of its donations on veterans programs, but the project says that figure is closer to 80 percent. CBS News spoke with more than 40 former employees, who described a charity with out-of-control spending on itself, straying from its mission to empower and support wounded veterans.

“I began to see how an organization that rakes in hundreds of millions of dollars a year is not helping my brothers and my sisters, or at least not all of them,” retired Army Staff Sgt. Erick Millette told CBS News.

“It was extremely extravagant, dinners and alcohol,” said another former employee. “A lot of the warriors that I saw needed mental health treatment. They don’t get that from Wounded Warriors Project.”

The reports on the charity’s spending even became fodder on the campaign trail.

“Wounded Warriors is not on the list of the 22 you’re giving to. Why not?” John Dickerson, host of “Face the Nation,” asked Trump.

“I saw some stories I think on CBS, actually, and I think I want to give it a little pause until we find out whether or not that stuff is correct,” Trump said.

The Wounded Warrior Project fired its CEO two months later, and hired Linnington. Until recently, the retired Army lieutenant general had led American efforts to locate prisoners of war and troops missing in action from past conflicts. Linngton has 35 years of military experience, and served in both Iraq and Afghanistan.

In addition to structural changes, the charity announced Wednesday one of the new reforms would be an increased investment in mental health – for service members with post-traumatic stress and traumatic brain injuries -- which was lacking, according to former staffers interviewed by CBS News.

“We’re doubling down on those efforts because indeed, that need is great and growing,” Linnington said. “We’re growing by 1,500 to 2,000 warriors a month today, and most of those warriors are coming to use to seek help for those illnesses.”

In the 2015 fiscal year, the Wounded Warrior Project spent $75 million – 21 percent of its total expenses – on fundraising, much less than that spent by other veterans charities. Linnington said “we’re taking a look at all of that,” and that the new structural changes are “focused on maximizing the impact” on the veterans.

The charity has also laid off nearly half of the executive staff and is reducing its total workforce of 600 employees by about 15 percent. Instead, the organization intends to add staff in other areas, including mental health, long-term in-home support and warrior engagement.

“So we’re trying to maximize what we do across communities and most importantly, we’re hoping to partner even more with outside organizations, nonprofits, the VA and others, to deliver this important need to our service members,” Linnington said.

In a statement to CBS News, Senator Charles Grassley, who demanded answers from the Wounded Warrior Project regarding its spending practices, said:

“While the federal government must fulfill the promises made to veterans, the personalized support that organizations like the Wounded Warrior Project can provide is needed more than ever.  People are looking for charities that can show the donating public how they get the most bang for the buck to help veterans.  The Wounded Warrior Project needs to improve, and it could do a lot of good to restore public trust by showing better fulfillment of its mission.  I look forward to continued updates on reforms.”

Linnington said the first step to regaining the public’s trust is transparency and accountability.

“It’s what I’m doing today, is pledging to everyone my best efforts, our best efforts to squeeze every nickel of every donor dollar into programs that matter for the warriors,” Linnington said. “Yesterday was the first step of many steps the organization has taken over the last six months, and we’ll continue to do the best we can to the utmost of our ability.”

Chef’s journey from the street to the kitchen
Thanks for reading CBS NEWS.
Create your free account or log in
for more features.
View CBS News In
CBS News App Open
Chrome Safari Continue
Be the first to know
Get browser notifications for breaking news, live events, and exclusive reporting.