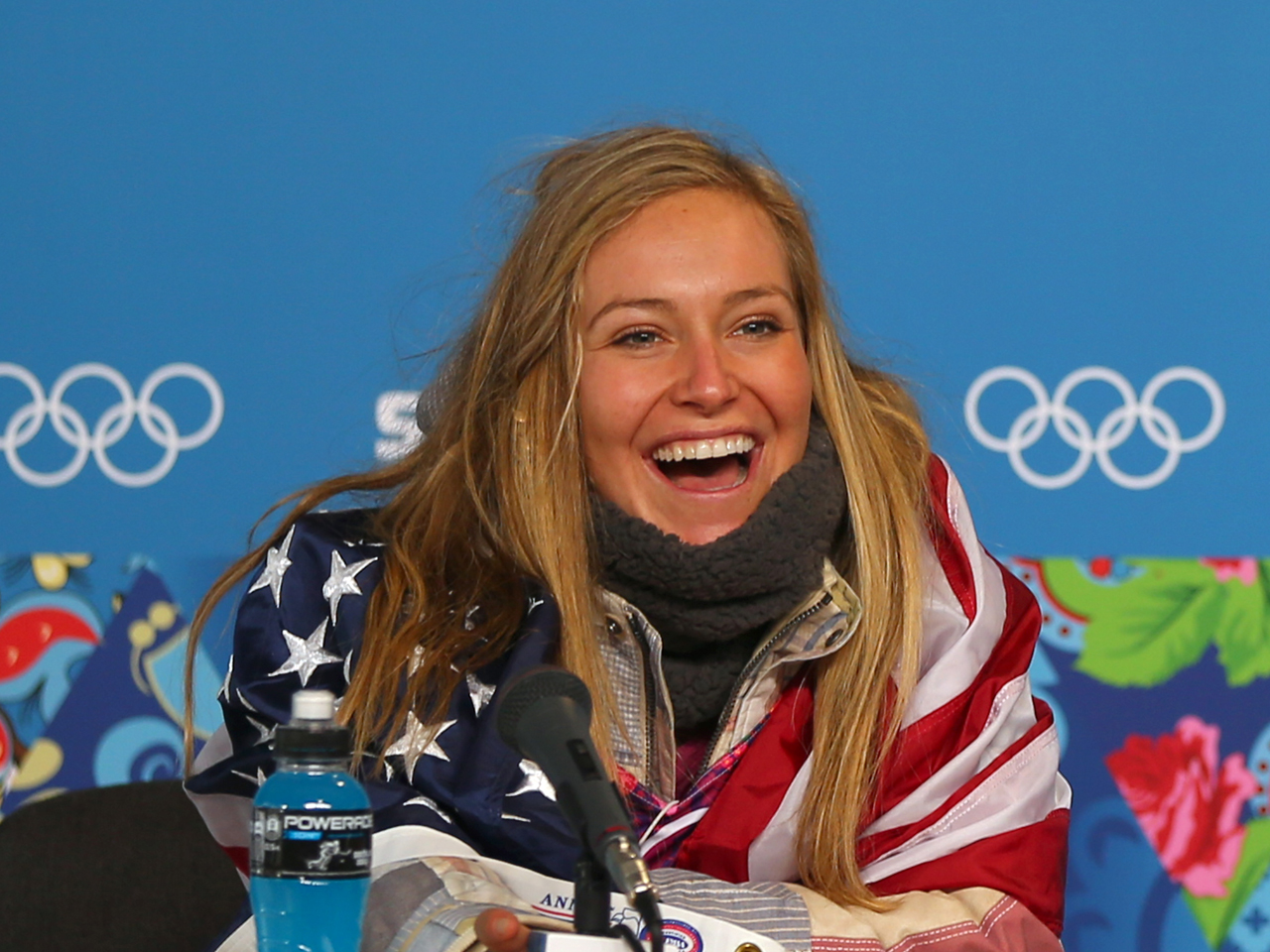 KRASNAYA POLYANA, Russia - Jamie Anderson stood atop the podium and lifted her arms in triumph, her long and sometimes draining quest for Olympic glory finally complete.

The American star ran into some unusual friends at the top.

Anderson gave the United States a gold-medal sweep in the first Olympic slopestyle snowboarding competition on Sunday at the Sochi Olympics, while Jenny Jones took bronze to win Britain's first medal in any snow sport.

Anderson soared to victory in a near flawless run in the women's final on Sunday, a day after Sage Kotsenburg captured the men's gold medal. The 23-year-old from South Lake Tahoe, Calif., did it, as is her fashion, when the moment absolutely required it.

Down to one last trip through the treacherous Rosa Khutor Extreme Park course, Anderson took a deep breath, enjoyed a brief moment of "Zen" and showcased the skills that have made her the greatest slopestyle snowboarder of her generation.

"I was really just trying to stay calm and kind of reserve my energy," Anderson said. "It was a lot of stress up there and even though it's just another competition, the stage and the outreach that this event connects to is out of control."

Anderson looked at ease as she made history. While some of her competitors struggled to find enough air time to provide the series of spins and grabs necessary to impress the judges, Anderson floated through the gray conditions.

"Jamie's an awesome competitor," American teammate Karly Shorr said. "She does whatever she has to win. She never cracks under pressure. She uses it. She lands."

Enni Rukajarvi of Finland took silver and Jones, a 33-year-old former maid at a ski resort, delivered a long-awaited medal for Britain. Alain Baxter appeared to give the country its first medal on snow when he finished third in the slalom at Salt Lake City in 2002, but his bronze was stripped for doping.

Jones grew up in southwest England, where her first lessons were on dry ground. The nation of rolling hills doesn't have rocky peaks meant for shredding, but Britain has begun producing world class snowboarders. Jones' friends and teammates Jamie Nicholls and Billy Morgan both made the men's slopestyle final.

"I know we don't have any mountains," Jones said. "But I think there's a growing number of snowboarders from England."

Still, it's Anderson who is the closest thing to a household name for a sport still trying to emerge from the shadow of the halfpipe.

Anderson had expressed concern about the difficulty of the course during training, particularly after a jarring crash in practice on Wednesday left her with an aching back.

She watched was competitor after competitor struggled to navigate the series of rails and jumps that Finland snowboarder Peetu Piiroinen feared was too big for women.

Sarka Pancochova of the Czech Republic cracked her helmet during a frightening crash on her second trip down the mountain. She lay motionless on the snow for over a minute before recovering to stand up and make it to the bottom.

Moments after Pancochova's scare, Rukajarvi bumped Jones out of the top spot with a 92.50, her highest of the competition.

And for a few minutes, it looked like it may be good enough. Olympic halfpipe gold medalist Torah Bright - competing in the first of three snowboarding events in Sochi - couldn't catch her. Neither could Switzerland's Elena Koenz or Shorr.

Ultimately, it came down to Anderson, just the way she prefers it.

She came into the games as a heavy favorite but found herself up against it after a so-so first run. Taking a deep breath and trying to drink in the moment, she delivered with a combination of athleticism and grace no one can match.

Anderson made the "safe" sign after landing her final jump and flipped her right mitten in the air before exchanging hugs with Rukajarvi, Jones and Switzerland's Sina Candrian. It was a moment symbolic of the camaraderie enjoyed by a group of snowboarders who consider themselves friends just traveling the globe trying to put on a show.

"I think most of us have been thinking about this for a few years," Anderson said. "To just have that moment come so quick and really knowing this is your moment, you just want to shine and do your best and show the world what a fun sport snowboarding is."