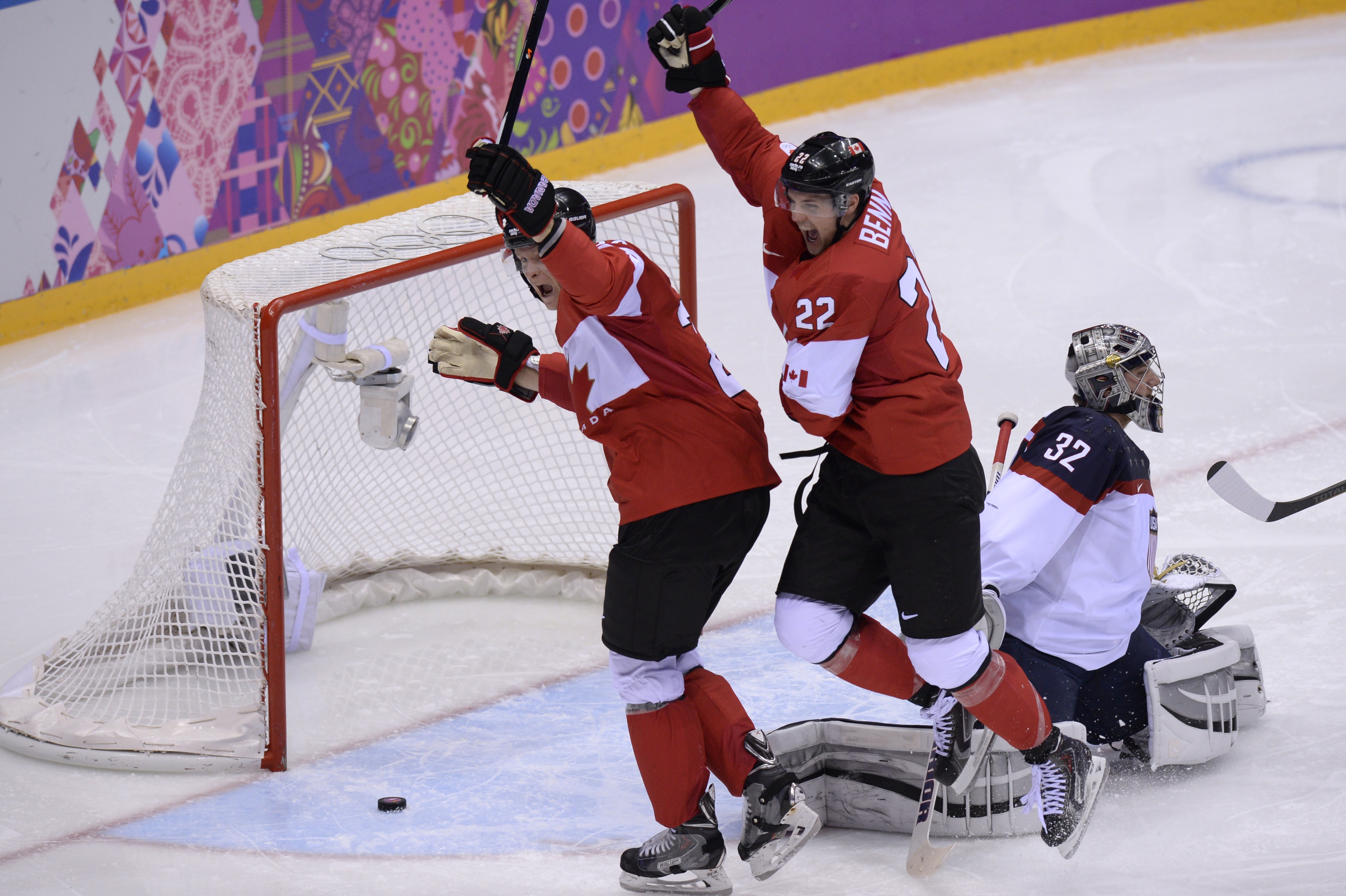 SOCHI, Russia -- Jamie Benn scored in the second period, Carey Price made 31 saves, and Canada beat the United States 1-0 Friday night in the semifinals of the Olympic men's hockey tournament.

Canada advanced to the gold-medal match Sunday against Sweden, which beat Finland 2-1 in the earlier semifinal at Bolshoy Ice Dome. The Canadians are on the brink of their third gold medal in four Olympics, and they're guaranteed their first medals outside North America in 20 years.

After its first loss in Sochi, the U.S. will face Finland for bronze on Saturday.

The defending Olympic champions left no doubt about their North American hockey supremacy in a semifinal rematch of the final game of the Vancouver Games, won on Sidney Crosby's golden goal.

The Canadians haven't even trailed in the Sochi Olympics, and they didn't need overtime to maintain border supremacy on the U.S. Their stifling defense has allowed just three goals in five games, and they clamped down on the high-scoring American offense for every minute of a slightly anti-climactic evening.

Canada beat the Americans for the fourth time in five Olympic meetings since the NHL players joined the party in 1998. Both teams rolled unbeaten through the Sochi tournament to this showdown, but the expected offensive theatrics in this meeting never occurred, buried along with the friendships and NHL bonds that must be discarded when these teams meet.

Defenseman Jay Bouwmeester created the only goal with a clever pass to Benn, the Dallas Stars captain in the midst of an outstanding tournament. That was all the offense needed by Price, the Montreal goalie who easily handled the Americans' few good chances, including their clunky power plays.

Jonathan Quick stopped 36 shots for the Americans, who had trailed for just 7:19 in Sochi before Benn's goal put them in a hole they never escaped.

CBSSports.com hockey writer Brian Stubits said the goal "was well-earned for Canada' as they had dominated play up until that point.

The Americans entered the rematch hoping for redemption from their gut-wrenching defeat four years ago. The U.S. rallied from a late two-goal deficit on Zach Parise's tying goal with 24 seconds left in regulation, only to lose on Crosby's score.

Instead, the Americans got another reminder of Canada's clout.

Crosby still has no goals through five games in Sochi, but the Canadian captain had his best overall game of the tournament, even if linemate Chris Kunitz failed to convert a handful of stellar chances created by his center.

For all the talent and high stakes on the ice, the Bolshoy wasn't exactly rocking for the game, with the predominantly Russian crowd apparently struggling to decide whom to root against.

The teams didn't need a crackling atmosphere to play a world-class brand of hockey. The scoreless first period was fast and exciting, with Quick stopping 16 Canadian shots. Crosby shook off his early-tournament struggles and played at a breakneck pace, while the American forwards generated numerous chances on pure speed.

Canada went ahead early in the second period during a shift by Benn and Anaheim Ducks teammates Corey Perry and Ryan Getzlaf. Bouwmeester threaded a pass into the slot, and Benn deflected it past Quick, whose aggression sometimes makes him vulnerable to such shots.

Canada didn't slow down: Benn nearly got another goal, but a facedown Quick gloved his shot. Paul Stastny then had a prime chance after a poor U.S. power play expired late in the period, but pushed a rebound just wide under Price.

Canada played without forward John Tavares, who injured his leg against Latvia. The U.S. was without defenseman Paul Martin, who had a cast on his hand at the morning skate.

Many viewed these two teams as the best in the tournament and fully expected a wild, heart-pounder similar to the gold medal game between the USA and Canada women the previous night.

Instead, the Canadians dominated from start to finish with a cold, ruthless performance to win 1-0 and advance to the gold medal game.