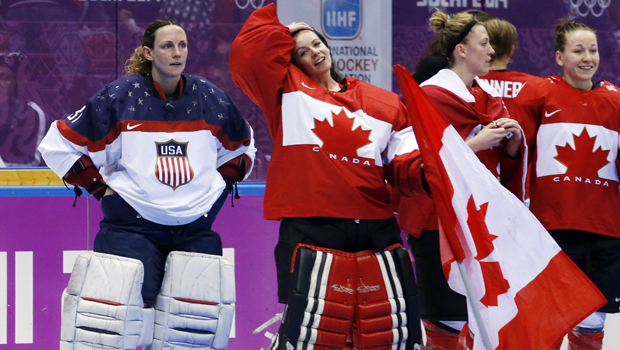 SOCHI, Russia -- The puck skittered the length of the ice on its way toward the empty Canadian net before clanging off the post and coming to rest in front of the crease.

It was, for a few more seconds at least, still a one-goal game.

Marie-Philip Poulin scored with 54.6 seconds left in regulation to complete Canada's comeback from a two-goal deficit, then added the gold medal-winning goal at 8:10 of overtime to beat the United States 3-2 on Thursday - the fourth consecutive Olympic women's hockey title for the country that created the sport.

Shannon Szabados made 27 saves for Canada, which has won 20 straight in the Winter Games since the Nagano final in 1998. That was the only gold medal for the United States, which has lost in the Olympic final to Canada in all three tries times since then.

Before the Sochi Games, U.S. forward Hilary Knight, who at age 20 was the youngest member of the Vancouver team in 2010, told CBS News that the players hadn't forgotten the loss.

"It wasn't a great feeling," said Knight, "and it's still a feeling that haunts a bunch of us today, and it's definitely in the back of our minds that we don't want to feel that way again."

On Thursday, Meghan Duggan and Alex Carpenter scored for the Americans. Jesse Vetter made 28 saves for the U.S., shutting the powerful Canadians down for 56:34 before Brianne Jenner knocked a seemingly harmless shot off a defender's knee and into the net.

With the goalie pulled for an extra skater, U.S. forward Kelli Stack sent a clearing shot down the ice, missing a potential game-clinching empty-net goal by inches. With Szabados still off, Poulin tied it and sent the game into overtime.

After six tense minutes of the extra period, the U.S. picked up a power play when Catherine Ward was sent off for cross-checking. But five seconds later, Jocelyne Lamoureux was called for slashing for swiping at the goalie's pads after a save. And during a sloppy player change by the Americans, five-time Olympian Hayley Wickenheiser got free on a breakaway before she was bumped from behind by Knight and sent sprawling.

It could have been called a penalty shot.

It could have been no call.

But Knight was sent to the penalty box for cross-checking. With the 4-on-3 advantage, the Canadians worked the puck around and over to Poulin, who knocked it into the open net and set off the celebration on the bench and among the Maple Leaf-waving fans.

Then, in a rare round-robin matchup between the sports' two top powers, Canada won 3-2.

Switzerland beat Sweden earlier Thursday for the bronze medal at the Bolshoy Ice Dome, where the women moved after playing the preliminaries at the smaller Shayba Arena next door. The 10,639 fans included the Canadian men's team that completed a sweep the hockey gold medals in Vancouver four years ago.

Less than 24 hours before the Canadians and Americans meet in the same rink in the men's semifinals, fans wearing Maple Leaf sweaters and Stars and Stripes scarves tried to outshout each other - with a healthy number of locals chanting "Ro-ssi-ya!" for their long-departed hockey teams. The pro-Canada crowd grew louder after the first goal, but the second one quieted them until the flurry at the end of regulation.

The hard-hitting first period featured five penalties and no goals. It was still scoreless when Duggan took a drop pass from Lamoureux at the left circle and wristed the puck into the top corner of the net past a screened Szabados.

The U.S. scored on a power play early in the third when Tara Watchorn was sent off for the third time in the game and, with just seconds left in the tripping penalty, Knight threaded a pass through Canadian defenseman Laura Fortino's legs to Carpenter at the far side of the crease.

She deflected it past Szabados and off the post to make it 2-0.
View CBS News In