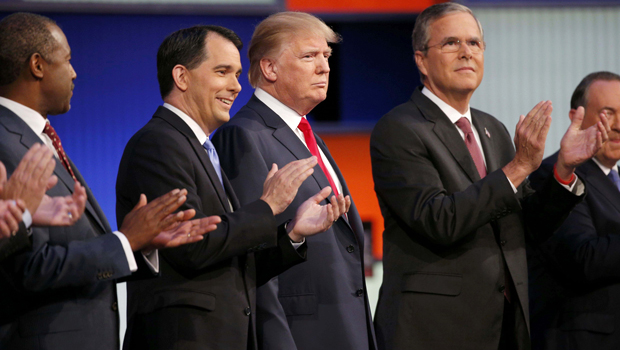 Voters can probably expect to see plenty of fireworks when the top 11 Republican presidential candidates (determined by an average of public polls) converge in California on Wednesday evening for the second GOP primary debate of the 2016 cycle.

Businessman Donald Trump continues to dominate the polls, and his combative style - he's attacked most of the 10 candidates with whom he'll share the stage on Wednesday - ensures he'll be the focus of many of the evening's scuffles.

"I hear they are going after me," Trump said of his fellow candidates' debate plans during a rally in Dallas on Monday. "Whatever. Whatever."

One of Trump's fellow outsider candidates, retired neurosurgeon Ben Carson, has been nipping at his heels in the polls recently, using his soft-spoken image to draw a contrast with the bombastic frontrunner.

Carson has said his strategy for the debate, which will be hosted at the Ronald Reagan Presidential Library by CNN, is to present the same calm, steady presence he's been channeling on the campaign trail.

"I just have to be myself. And if being myself resonates with the American people, then they will choose me," he told the Associated Press in a recent interview. "And if it doesn't...they will choose somebody else."

In an interview with CBS News Chief White House Correspondent Major Garrett, Carson suggested he and the other outsider candidates are excelling in the polls because the American people are tired of politicians' doublespeak.

"People feel that they have been hoodwinked too often by politicians who say they are going to do something and then they don't do it," he said. "And again, I'm not saying that's the case with all the people who are running but I think people have decided, rather than me sitting here and figuring out which politician is a good person and which one isn't, let's just go a different direction altogether."

Not every contender will be pulling his or her punches.

Former Florida Gov. Jeb Bush, a favorite of the GOP establishment who was once considered a frontrunner for the nomination but has since seen his polling numbers slip, has suggested he'll turn in a feisty performance, vowing to punch back if anyone targets him onstage.

"If someone comes at me, bam! I'll come back at 'em," he said Monday in Salem, New Hampshire, according to Reuters. "I'll campaign hard."

It would be a bit of a departure from Bush's performance in the first debate, when he delivered a solid, workmanlike performance but was not overly aggressive in throwing jabs at his rivals.

One candidate who was decidedly aggressive in the first debate, Kentucky Sen. Rand Paul, has promised to continue going on the attack during the second face-off, and he's signaled that Trump will be his top target.

"I will make sure that everybody in this country knows he's a fake conservative. And there's nothing conservative about Donald Trump," Paul told CNN on Tuesday. "I don't think he has the vision for limited government, balanced budgets, low taxes. These are things that conservatives have fought for for decades, he's been on the other side of every one of those issues and voters deserve to know that."

Asked about how he's preparing for Wednesday's debate, Paul quipped, "I will be out shooting target practice in the morning...I will be shooting the tax code with some friends tomorrow morning, and that will be my preparation."

And New Jersey Gov. Chris Christie, who has seen his reputation as the GOP's brash, tell-it-like-it-is candidate usurped by Trump's rise, has promised he won't simply fade into the background.

Many eyes in the room will be on former Hewlett-Packard CEO Carly Fiorina, who was relegated to the undercard match-up in the first GOP debate last month but is now making her debut on the big stage.

Trump recently went after Fiorina, mocking her "face" (and later insisting he was only talking about her "persona.") He's also trashed her record at Hewlett Packard.

In an interview on CNBC, Fiorina promised, "Mr. Trump's going to be hearing quite a lot from me." She took note of the fact that "Donald Trump has said many things about other candidates...but he has not talked about their appearance."

Trump has suggested he's not afraid of getting too aggressive with the only female candidate in the GOP bullpen.

"I'm not going to call her honey," Trump told The New York Times last week. "Look, she's only got 3 percent in the polls, so in order to get recognition, I think she'll start hitting me. So I think she's fair game...I want to talk about her corporate history, her failures at Hewlett-Packard...And that will be damaging enough to her."

Perhaps the candidate with the most to lose Wednesday is Wisconsin Gov. Scott Walker, who was once a top-tier contender but has fallen to the back of the pack in recent surveys. During a recent interview on Fox News, Walker suggested he'll make the case that he's "somebody who's been tested" and that he'll deliver real results, not just pizzazz.'

His approach to the rough-and-tumble of the debate? "Be aggressive. Show passion. Show the kind of energy that got us to that recall victory in Wisconsin."

And Florida Sen. Marco Rubio, who's in a middling position in the polls but earned praise for a crisp, polished performance during the first GOP debate, has said he'll approach the debate with the seriousness and substance it deserves.

"I always view these debates as an opportunity to tell people who I am and what I'll do" as president, Rubio said on Fox News on Tuesday. "This not a game show, it's not a production. It is in fact deciding the most political office in the world...That's a serious endeavor, and that's how we take it, and that's how we prepare for it."