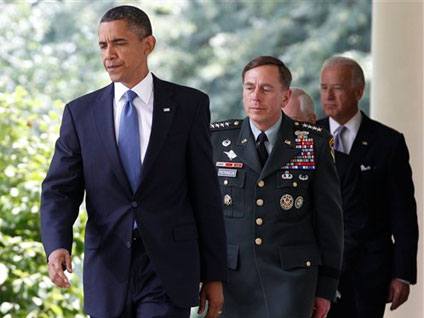 But we're told their one-on-one meeting lasted for about 30 minutes. So here's the question the White House isn't answering: if the president was already thinking about McChrystal's replacement, what did the two men discuss for half an hour?

Did McChrystal make an argument to keep his job? Was the president reluctant to fire him?

So far, at least, the usual suspects among White House officialdom aren't saying. And maybe they don't know. They weren't in the room.

It wasn't until after his meeting with McChrystal that the president called in his top National Security advisers: Vice President Joe Biden, Secretary of Defense Robert Gates, Secretary of State Hillary Clinton, Chairman of the Joint Chiefs of Staff Admiral Mike Mullen, National Security Adviser James Jones and Chief of Staff Rahm Emmanuel. The president told them that he intended to appoint General Petraeus to take over in Afghanistan.

After that, in a 45-minute one-on-one, the president met with Petraeus and asked him to take on the job. It's a demotion of sorts - Petraeus' current job is leading the Army's Central Command, which has oversight of the wars in Iraq and Afghanistan - he was McChrystal's boss.

Tapping Petraeus is a masterful tactical and political move. He's the man who wrote the book on the counterinsurgency tactics McChyrstal was implementing in Afghanistan. He knows all the players in Afghanistan, Pakistan and among the NATO allies. And he's so well respected in Congress that he should have no trouble getting confirmed.

But we're still hoping to find out just what the president and the general talked about after McChyrstal fell on his sword.


Bill Plante is a CBS News Senior White House Correspondent. You can read more of his posts in Hotsheet here.